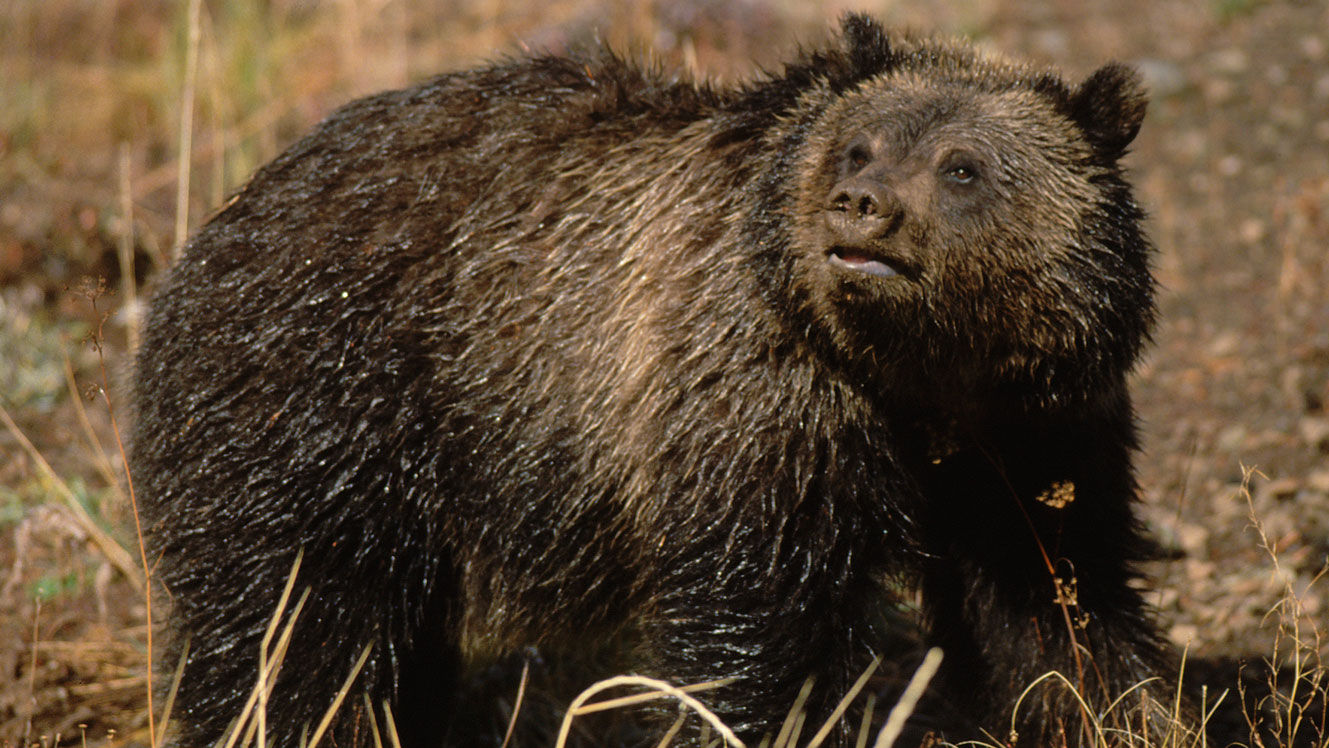 Grizzlies don't mind getting dirty for a meal. Bear 1017, a young male, recently lost his research collar while rooting in an agricultural ditch bordering a Vital Ground habitat site.

By Tatum McConnell and Matt Hart

Wildlife biology can get messy. As messy as, say, being waist deep in water, mud, and bits of a decomposing cow. In November, that’s just what three grizzly bear researchers found themselves doing on a piece of habitat protected by Vital Ground as they searched for a bear’s dropped research collar at the base of the Selkirk Mountains.

Shortly after, Vital Ground received one of our favorite kinds of email, a heads up from U.S. Fish and Wildlife Service biologist Wayne Kasworm that a grizzly bear with the research number 1017 had recently come through one of our protected habitat areas in Idaho’s northern Panhandle. We spoke to Kasworm to find out more about our grizzly visitor. The bear’s story, it turns out, offers a fascinating example of some of the challenges grizzlies face on our modern landscapes.

Keeping Up with Selkirk Grizzlies

While out on a research flight to look for grizzly bears via radio telemetry, Kasworm explained, he noticed the special signal for an inactive collar on one of Vital Ground’s properties along the eastern edge of the Selkirk Mountains. (These kinds of research flights are just another day in the life for a grizzly biologist, making it now the coolest and messiest job ever.)

Researchers like Kasworm use radio collars to collect information on grizzly populations. In the Selkirk Mountains that span the Idaho-British Columbia border, this is especially important, as the grizzly population there numbers around 75 individuals, according to Kasworm, putting it at risk of decline due to lack of genetic diversity.

The Selkirks make up one of the Fish and Wildlife Service’s six designated grizzly recovery zones in the United States, and thanks to work from wildlife managers, conservation organizations, and local communities, the Selkirk grizzly population is now increasing at a rate of two percent per year, according to Kasworm. To put this in context, one of the highest annual grizzly population growth rates come out of the Greater Yellowstone area, topping off at about five percent.

Due to grizzlies’ long gestation periods and small litter sizes, growing a grizzly population is slow but steady work. So is studying it. “We collar bears in the area to try to get an idea of mortality rates and causes, survival rates, and for females, reproductive rates,” Kasworm explained. These factors allow him to understand population trends for the area, and learn what particular bears are up to.

So how do you get a collar on a bear in order to track its movement? To keep people and bears safe, it has to be done very carefully. Using leg snares, specifically designed to prevent trapping cubs, a grizzly can be caught with minimal harm. A trap will use a radio signal to notify biologists that it has been triggered, and they’re checked frequently to ensure no animals are stuck for too long.

Once they arrive at the trap, biologists tranquilize the bear, take data such as weight, size, and overall health, and put a collar on that can transmit radio data. While certainly not a bear’s best day, these data collection efforts are designed to be minimally invasive and give scientists the information they need to help the overall population. (On a side note, new research into facial recognition of grizzlies could make trapping and collaring less necessary in the future.)

Researchers don’t want bears to be stuck with that collar forever, so it includes a canvas spacer that wears out after 1-3 years. Since bears change in size so much from spring to fall, the collars allow plenty of room for growth and can sometimes slip off on their own.

Looking back on the data from 1017’s collar, Kasworm could see that his team had put a collar on this 4-year old male earlier in the spring, just south of the Canadian border where the Selkirk foothills meet the wide Kootenai River valley. From there, 1017 crossed into British Columbia and gorged himself on a relatively new grizzly food source: farm-fresh corn.

Unfortunately, corn has become a common choice for bears that range near farmland. In wide fertile valleys at the base of mountain ranges, like the Kootenai as it flows through northern Idaho or Montana’s Mission Valley, cornfields turn into irresistible bear buffets. As omnivores and scavengers, it’s hard to dissuade a hungry bear from taking advantage of an easy food source, but folks like our partners at People and Carnivores are working on it.

On the farm 1017 visited, Kasworm observed four collared grizzlies eating corn this summer. At some point, however, 1017 got tired of corn for breakfast, lunch and dinner, or got forced out by another bear, and headed back south. Led once again by his nose and appetite, 1017 found another food source tied to agricultural production in the valley. This time, he discovered a decomposing cow in a farm’s drainage ditch that borders a piece of Vital Ground habitat on the edge of the Selkirk foothills. Kasworm expects that while rooting around in the remains of the cow, 1017’s collar got caught and the canvas spacer tore off.

Searching for a Grizzly’s Collar

This is where we leave 1017, as his collarless travels returned to anonymity. But the story doesn’t end there: Once a collar drops, bear managers will go to pretty extreme lengths to collect it. This is because collars are valuable and can be reused on future bears. In this case, since the collar dropped in a ditch and was underwater, some important data hadn’t yet been transmitted.

It’s not the first unlikely situation Kasworm has found himself in while looking for a collar. “We have had at least one collar that came off in a den that we retrieved,” he said. “I remember retrieving another collar from a creek where it had dropped and the creek had deposited some sand and rocks over it. I actually had to dig that collar out.” He added that other found collars likely had human interference, such as a cut collar found inside a stream culvert.

After spotting 1017’s collar on one of his research flights, Kasworm drove to the area expecting to find the device somewhere in a nearby field. Instead, he found the collar buried in mud, ditchwater and bits of decomposing cow. With more than 30 years of seniority to his name, Kasworm decided to pull rank. “Seeing the situation, I made an executive decision to send the people who work for me in to get it,” he joked.

With chest-waders and nets in hand, the team got down and dirty, literally, to find the collar. From there, they were able to collect the remaining data on our grizzly friend.

While they aren’t all tracked by Kasworm, bears have stories similar to 1017’s across the Selkirks and their neighboring ecosystem to the east, the Cabinet-Yaak. These two small populations, each with well under 100 grizzlies, have been historically divided by the Kootenai Valley that splits the Selkirk, Cabinet and Purcell mountain ranges. According to Kasworm, however, grizzlies are now moving between the ranges more often, with a few bears moving from the Purcells west into the Selkirks, several moving in the opposite direction, and one more moving north from the Cabinets into the Purcells across Vital Ground’s Wild River property.

“Seeing bears move is all well and good but what we ultimately want to see is bears moving and reproducing,” Kasworm cautioned. “Movement alone is not the entire picture. We want to see gene flow and gene flow is represented by reproduction.”

It will take focused habitat protection and robust conflict mitigation efforts for these grizzly populations to connect and thrive. Grizzlies don’t just face a fragmented landscape: As 1017’s story shows us, the lure of easy, human-related foods can make moving from one wild area to another far from straightforward. Corn might be an easy way to fatten up for winter, but sticking around agricultural areas in valley bottoms puts bears at greater risk of stumbling into conflicts with people. Fortunately, mitigation strategies like electric fencing and bear-proof sanitation have proven successful at preventing conflicts within communities in the transboundary Selkirk-Purcell region, even if keeping bears out of cornfields remains a trickier challenge.

When grizzlies like 1017 pass through Vital Ground habitat within identified corridors that link ecosystems, they remind us that we’re moving in a positive direction. While 1017 may not cross the Kootenai Valley and mate with a female in the Purcells or the Cabinets, another bear without a collar may have done so already.

It’s these landscape connections that conservationists are working toward, along with the community investment in bear awareness that helps grizzlies stay out of trouble along the way. As the effort to study bears like 1017 shows, it’s a team effort spanning government agencies, nonprofit organizations, communities, individual landowners and countless other stakeholders. By supporting Vital Ground, you’re a part of that effort, helping bears like 1017 reconnect their wild strongholds and thrive.