Meet Bart the Bear II: A Giant Force for Conservation

Bart the Bear II was an 8.5-foot tall, 1,110-pound Alaskan brown bear whose impact on wildlife was even bigger than his body or his acting accomplishments. Also known as Little Bart, Bart II was small only in comparison to his predecessor, Bart the Bear, who stood a foot taller and 400 pounds heavier in his prime.

Orphaned as a tiny cub in Alaska, Bart II and his sister, Honey Bump, were rescued and delivered to Doug and Lynne Seus, the Utah-based animal trainers who had turned Bart the Bear into an international celebrity and established The Vital Ground Foundation in 1990 to help protect habitat for Bart’s wild grizzly cousins. Little Bart soon got very big, in the flesh and in the film industry. Over two decades, Bart’s acting accomplishments included Dr. Doolittle 2, Without a Paddle, Into the Wild, an episode of HBO’s mega-hit Game of Thrones and, in his final starring role, a hilarious and hugely popular ad for Vital Ground’s partner in conservation, Kodiak Cakes. 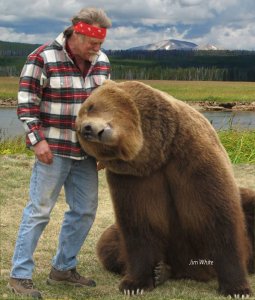 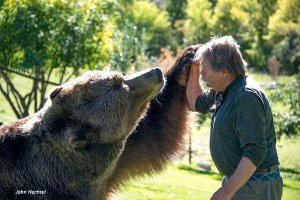 The Legacy of Bart the Bear II

Like his predecessors Bart and Tank and his sister Honey Bump, Bart II’s fame has mattered most because of its positive impact for grizzly bears and other wildlife. As an ambassador for The Vital Ground Foundation, Bart supported grizzly habitat conservation since he was a cub. His appearances at Vital Ground fundraisers brought in support for countless projects, from protection of key habitat acres to support of conflict prevention work like electric fencing and bear-proof sanitation in communities. And his international profile as a film star led countless conservation-minded individuals to discover Vital Ground and support the organization’s work to protect the wild heritage of the Northern Rockies for future generations. With over 600,000 acres protected or enhanced during his lifetime, Bart’s conservation impact is only getting bigger.