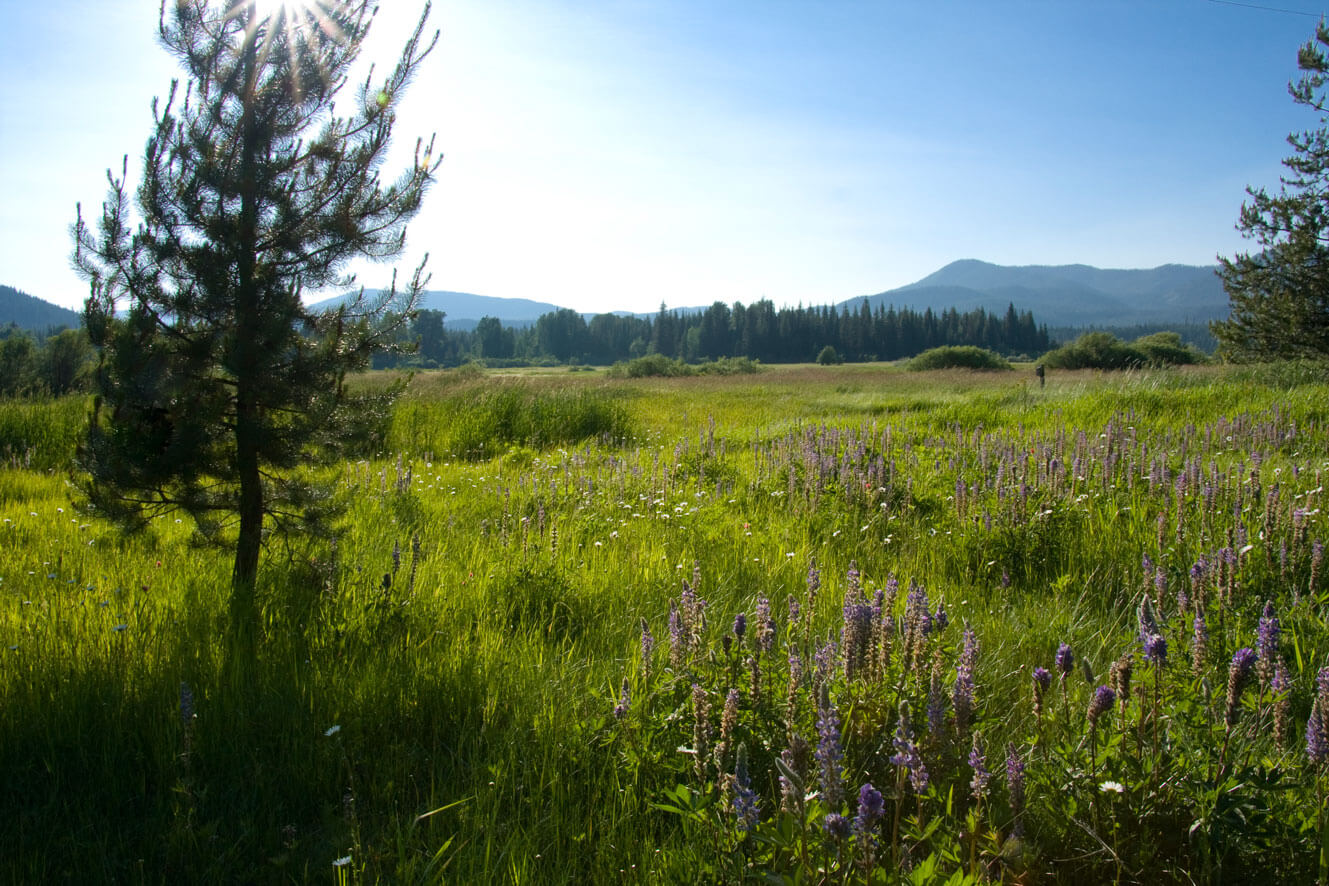 As spring turns to summer, grizzly bears in Idaho’s Selkirk Mountains await berry season. High in the Selkirks, up along the Canadian border, pockets of snow linger through June, the nights still get cold, and if you’re a grizzly, the lowlands are the place to be.

It’s the time of year when wildlife need a place like Bismark Meadows, a low wetlands complex surrounded by the Selkirks and a crucial spring foraging spot for grizzlies. And that means wildlife also need you.

A portion of Bismark Meadows remains open to real estate development, key uplands where new housing would hinder animals’ ability to travel from higher ground down to the wetlands.

We have until October to make sure that doesn’t happen—which is why we’re asking you to help conserve 455 vital acres in this lush mountain haven, home to rare wetland plants and the rich network of life they support.

With some of the region’s earliest spring green-up, animals flock to Bismark Meadows. These are some of the healthiest wetlands in the country, supporting six threatened or endangered plant species that rely on the meadows’ unique fen habitat. Thanks to the ideal spring and early-summer forage, biologists have documented eight different grizzly bears around the meadows in recent years, out of the larger Selkirk Ecosystem’s population of 50-60 bears. Meanwhile, moose fill up on the salad of aquatic plants while elk herds pass through to graze, wolves tracking their travels. Later in the year, Westslope cutthroat trout, a nationally threatened species, will follow the streams that run through Bismark Meadows on their way to native spawning grounds.

With Bismark Meadows near the Selkirks’ southern terminus, the area provides something of a geographic bridge. In British Columbia, the range’s tallest peaks rise over 11,000 feet, towering above the headwaters of the Columbia River. The mountains spill down into Idaho, where the Kootenai Valley—home to several Vital Ground projects—is all that separates them from the Cabinet Mountains of Montana and, farther south, the sprawling Bitterroot Range, part of a wilderness complex in central Idaho that spans more than four million acres.

That’s conservation gold when it comes to grizzly bear recovery. The U.S. Fish and Wildlife Service estimates populations of just 50-60 bears in the Selkirk and Cabinet-Yaak ecosystems, while the Bitterroots still await the return of a resident grizzly population. Linkages like Bismark Meadows help create a connected landscape that could offer bears and other wildlife protected passage all the way from Canada’s vast wildlands into central Idaho—and even the Greater Yellowstone Ecosystem lying just a few valleys and subranges east of the southern Bitterroots.

It’s this connective value for grizzlies—and all species sharing their range—that first drew Vital Ground to Bismark Meadows. Since 2001, gracious support from folks like you have helped us chip away at the goal of protecting the entire wetlands complex from development. Four out of six chunks of private land in the area have already been purchased, totaling nearly 500 acres. Your continued support will help facilitate our biggest target yet — a substantial purchase contract with an October 15 expiration date.

That means the time is now to rally in support of this rich landscape and the rare species it supports. With the entire wetlands area spanning roughly 1,100 acres, our new 455-acre purchase will solidify the protection of this sanctuary. Your support will ensure that grizzlies have room to roam in the Selkirks, from high mountain dens down to low-elevation meadows. It will protect and connect generations of wildlife in a remote crossroads of transboundary conservation.

Donate today—and help save Bismark Meadows for all things wild!