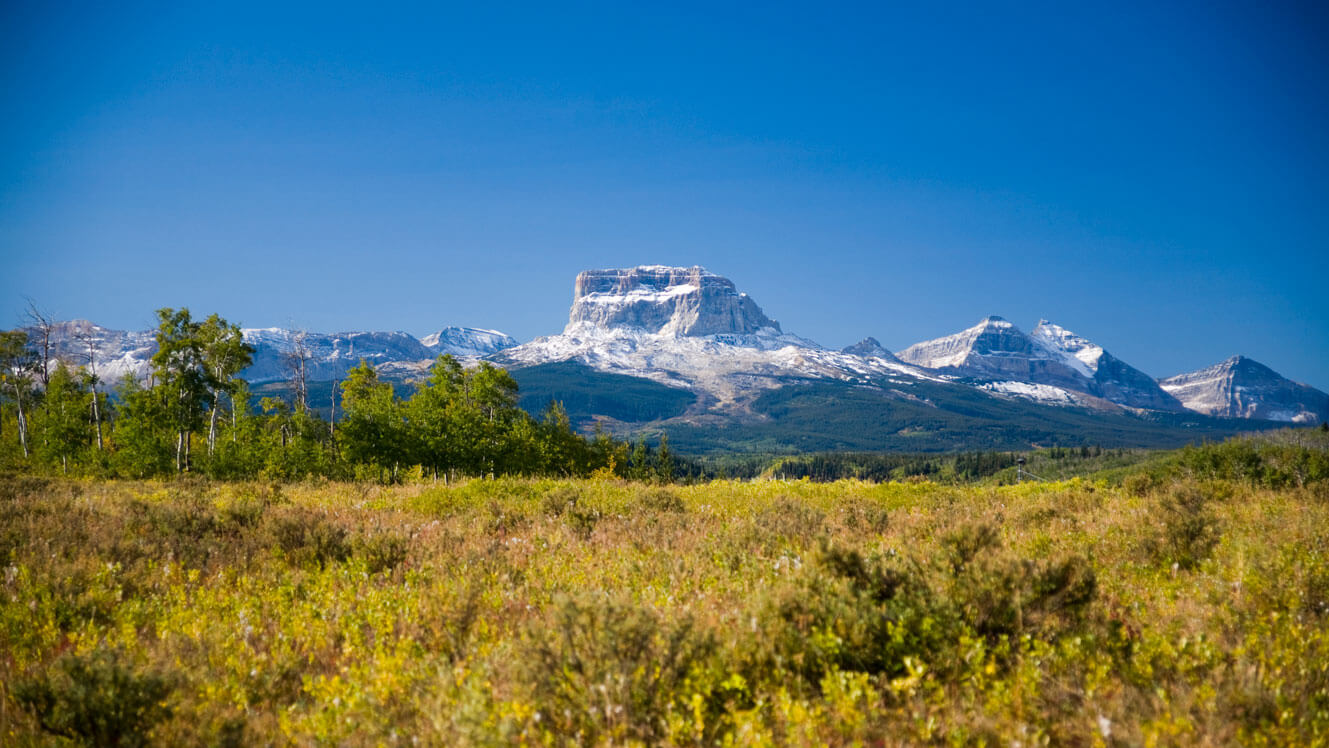 Chief Mountain rises on the border of Glacier National Park and the Blackfeet Nation. Kennedy Creek flows near the peak before crossing a wildlife-rich 74-acre private inholding recently purchased by Vital Ground and returned to tribal ownership in a collaborative effort to protect key wildlife habitat.

A nonprofit land trust that protects key movement areas for grizzly bears and other wildlife, Vital Ground purchased the acreage before immediately transferring ownership to the Blackfeet Nation. Previously a private inholding surrounded by tribal lands, the site provides habitat lush with conifers, aspen and other vegetation, leading to heavy traffic from grizzlies and other species.

“I am very pleased that Vital Ground was able to partner with the Blackfeet Nation to protect the ecological integrity of the Chief Mountain-Yellow Mountain area,” said Buzz Cobell, Director of Blackfeet Nation Fish and Wildlife. “Kennedy Creek is inhabited by one of the few populations of bull trout existing on the east slope of the Rocky Mountains. In addition, this area is used extensively by grizzly bears, moose, elk, deer and other important wildlife species. Thanks to our collaborative efforts this special area will continue to be wild and undeveloped.”

The area’s combined cultural and ecological significance spurred Vital Ground co-founders Doug and Lynne Seus to lead the project as they celebrated the organization’s 30th anniversary. After founding Vital Ground in 1990, the Seuses purchased 240 acres of prime grizzly habitat south of the Blackfeet Reservation along the Rocky Mountain Front.

Bart the Bear II—a Vital Ground ambassador and famed animal actor adopted by the Seuses as an orphaned cub—provided further inspiration and support for the project. His predecessor, Bart the Bear, motivated the Seuses to establish Vital Ground on behalf of wild grizzlies and all that share their range.

“We thank the Blackfeet Tribal Council for such strong leadership in shielding biodiversity,” Doug and Lynne Seus said in a statement. “This project carries benefits for every living thing that stretch far beyond lines on a map. We know Bart is grateful for the opportunity to fund a significant land acquisition, home to a bounty of wildlife and an impressive list of plants.”

The effort fits into a larger collaborative push to protect habitat in the Glacier foothills area. The Blackfeet Nation is working with numerous conservation partners to acquire similar inholdings to the project site, managing the land for habitat value through ecological restoration, retiring grazing leases and more.

“Protecting this irreplaceable wildlife habitat at the footsteps of Glacier National Park fits squarely within our One Landscape strategy,” said Vital Ground Conservation Manager Mitch Doherty. “But this project goes beyond protecting land for wildlife. Working with members of the Blackfeet Nation, Vital Ground was able to return this land to the people who have been caring for it since time immemorial.”

An accredited land trust and 501(c)(3) organization, Vital Ground works cooperatively with landowners, communities, and federal, tribal and state agencies to conserve some of Earth’s most magnificent and unique places for people, grizzly bears and entire natural communities. For more information, visit www.vitalground.org; also available at (406) 549-8650 and info@vitalground.org.