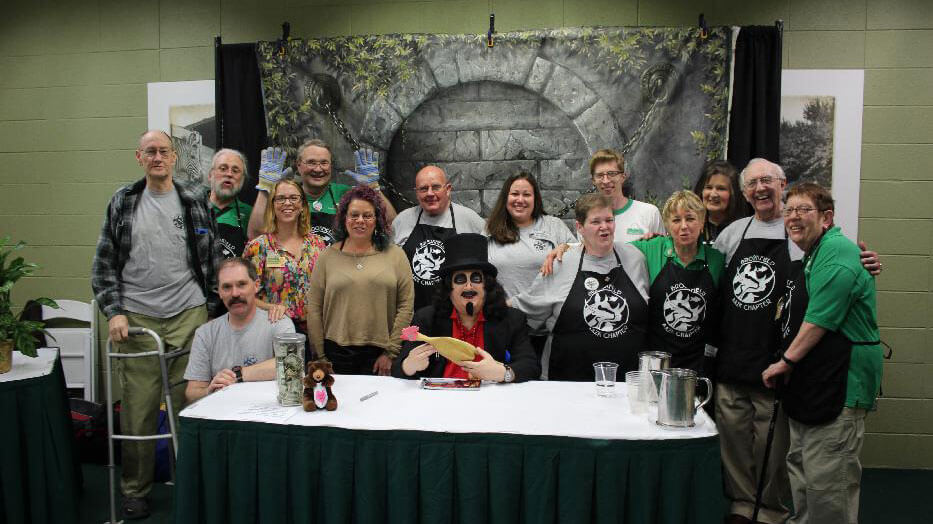 Photo: Courtesy of Brookfield AAZK
Members of the Brookfield (Ill.) Chapter of the American Association of Zookeepers (AAZK) pose at the chapter's annual spaghetti dinner benefiting Vital Ground. Held in April, the event raised $9,500 in support of grizzly conservation and also featured an appearance by local entertainer Svengoolie (pictured center).

There are no wild bears in Chicago—unless you’re talking about the football team—but folks in the Windy City area made a big contribution to grizzly conservation again this year when the Brookfield (Ill.) Chapter of the American Association of Zookeepers (AAZK) hosted its 12th annual spaghetti dinner. Held in April, the event has benefited Vital Ground for the last decade.

This year’s dinner filled the Brookfield Zoo Discovery Center. Thanks to a grizzly-themed silent auction, it raised $9,500 for protecting habitat and preventing conflicts in the Northern Rockies.

Vital Ground’s ties to the Brookfield Chapter are strong, with our board chair, Stuart Strahl, also serving as President of the Chicago Zoological Society, a role that oversees operations of the Brookfield Zoo, the largest zoo in the Chicagoland area. Beyond spaghetti, Stuart’s ties to the AAZK recently benefitted grizzlies in a unique way:  When three grizzly cubs were orphaned in Montana earlier this summer, Strahl’s post on an AAZK message board led to a last-minute adoption agreement with a zoo in Quebec, saving the cubs from being euthanized. (You can read the full story here.)

It’s this kind of nationwide—and even international!—passion for conservation that drives our work here in the wildest corner of the Lower 48. With the Memphis AAZK chapter holding its own Vital Ground fundraiser for the first time this year, we are more grateful than ever for our ongoing support from the zookeeping community.

Thank you, Brookfield AAZK, for all that you to support grizzlies and all things wild!