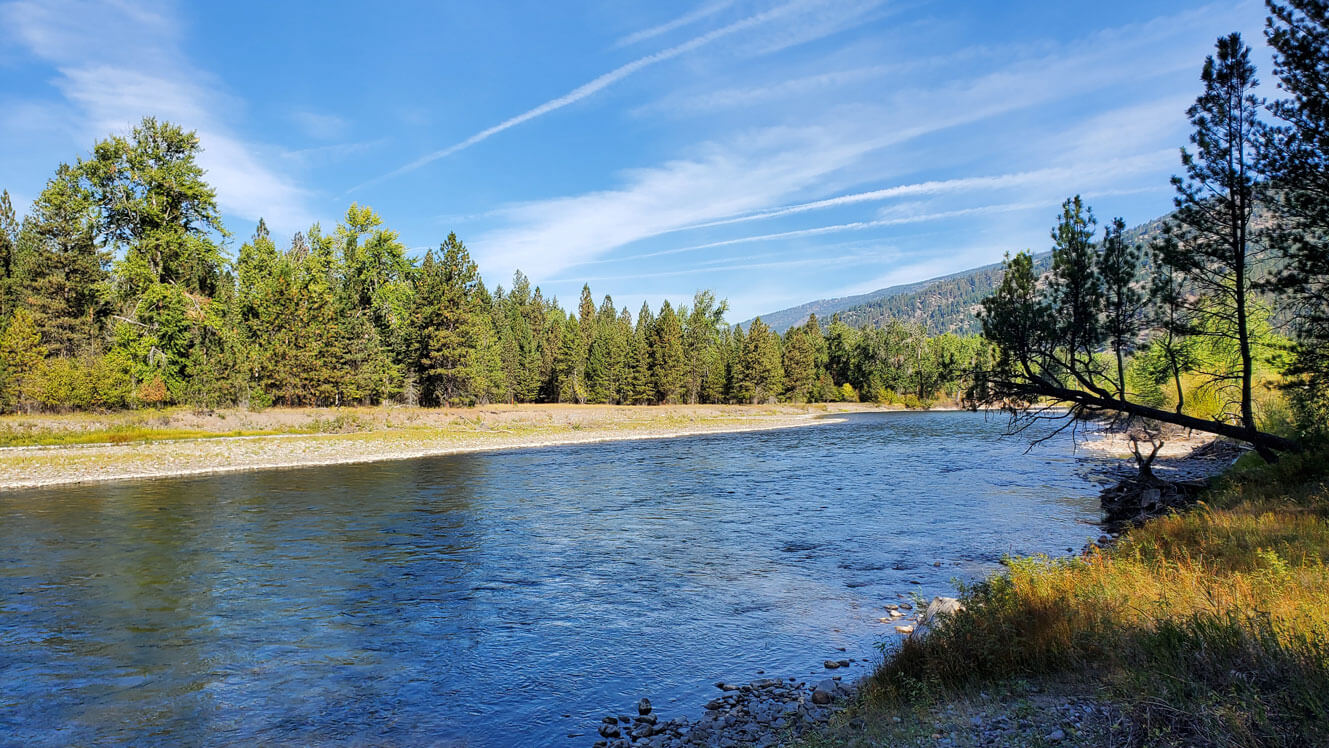 Photo: Mitch Doherty
Western Montana's Clark Fork River flows through its confluence with Donovan Creek past key linkage habitat for grizzly bears and other wildlife, now conserved by Vital Ground and the Yellowstone to Yukon Conservation Initiative in partnership with a conservation-minded landowner.

MISSOULA, Mont. — A key wildlife movement area across the Clark Fork River and Interstate 90 will remain open for grizzly bears, elk, moose, native trout and many more animal and plant species after The Vital Ground Foundation and Yellowstone to Yukon Conservation Initiative (Y2Y) completed a conservation easement with a private landowner on 34 acres southeast of Missoula this week.

Connecting the Garnet, Sapphire and Anaconda-Pintler mountain ranges, the habitat linkage zone between Missoula and Butte is an increasingly high priority for grizzly bear conservation. The facilitation of safer passage across the Clark Fork and I-90 corridor is a crucial step to larger regional connectivity for the species, with recent documentation of several grizzlies traveling between the Sapphire and Bitterroot Mountains providing encouragement for conservationists.

“Projects such as this one at Donovan Creek not only provide the habitat security bears and other wildlife need, but also limit the opportunity for future conflicts between people and bears,” says Mitch Doherty, Conservation Director at Vital Ground. “That’s especially important given the level of bear activity and movement we’re seeing this year.”

Against the backdrop of a regionwide development boom, Vital Ground and Y2Y’s latest collaborative effort conserves rich wetland and forest habitat on both sides of the Clark Fork at its confluence with Donovan Creek. Located between the communities of Turah and Clinton, the project area provides range for elk, moose and deer, native cutthroat and bull trout and even rarer carnivores such as wolverine, fisher and Canada lynx.

For grizzly bears, the Garnet-Sapphire linkage zone carries particular importance in helping facilitate the natural return of a resident grizzly population to the Bitterroot Ecosystem. In addition to this year’s evidence of grizzly movement from the Sapphires into the Bitterroot Valley, the area drew widespread attention last year when GPS collar data showed that a young male grizzly—dubbed “Lingenpolter” by biologists—attempted to cross Interstate 90 an estimated 46 times within the larger zone between Missoula and Butte. While Lingenpolter eventually crossed I-90 successfully, the bear’s travails highlighted the need for habitat conservation in a part of Montana seeing increased grizzly activity.

“This wildlife corridor is really important for grizzly bears and other wildlife as they try to navigate I-90 and Missoula’s human footprint,” says Nick Clarke, Senior U.S. Program Coordinator for Y2Y. “It helps connect the Northern Continental Divide, Greater Yellowstone and Bitterroot ecosystems, and these acres are adjacent to other conservation easements and extensive public lands, allowing wildlife to safely move through and resulting in a significant area of conserved habitat along the Clark Fork River Valley.”

Collaborating to Benefit Wildlife and People

With Montana ranking among the nation’s fastest-growing housing markets and the Donovan Creek confluence just 15 miles from Missoula, increased subdivision and dense development in this part of the Clark Fork Valley would impose further habitat fragmentation and increase the risk of conflicts between wildlife and people. It would also threaten public access to popular areas for hunting, fishing, hiking and other activities central to the region’s rural identity.

The project site abuts both public lands and other conserved private lands, solidifying open space protection across a larger stretch of the valley. The new conservation easement with landowner Dick Auerbach keeps the project site in private ownership and ensures habitat preservation and continuation of the area’s open, scenic character.

“We’re fortunate to work with landowners like Mr. Auerbach,” says Doherty. “These individuals recognize not just the value their land holds for fish and wildlife, but for all of us that appreciate these open spaces, whether we travel these valleys by vehicle, boat or foot.”

The collaborative effort builds off Vital Ground and Y2Y’s previous work with conservation-minded landowners to achieve lasting solutions for land, wildlife and people. In connectivity areas prioritized by Vital Ground’s One Landscape Initiative, the organizations have recently joined forces on projects at the confluences of the Clark Fork and Bull River, the Clark Fork and Ninemile Creek and the Kootenai and Yaak rivers.

“Conserving connections between large areas of habitat is key to healthy ecosystems and wildlife populations,” adds Clarke. “We can’t take for granted that Montana is home to abundant wildlife and vibrant landscapes. Projects like this in collaboration with private landowners are necessary to ensure that Montana remains the special place that it is.”