The Gobi Desert sprawls across portions of Mongolia and China, with a small population of grizzly bears surviving in a northern mountainous portion of the arid region. 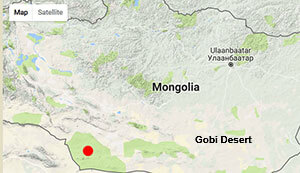 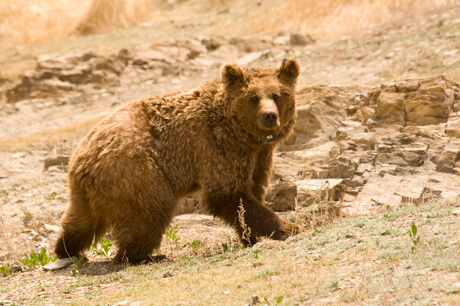 In one of the harshest climates on Earth, grizzlies are clinging to life. In the Mongolian portion of the Gobi Desert, low rugged mountains create enough shelter to support a remnant population of Ursus arctos, the same bear we know as the grizzly or brown bear in North America. In the Gobi, just 2-4 inches of precipitation fall per year and temperatures swing from minus-35 Fahrenheit in winter to 115 in summer. The Gobi grizzlies are undersized by North American standards, surviving on a diet of plants and occasional rodents. Recent tracking and hair sampling studies indicate a population of just 25-40 bears, who cluster around three oasis complexes where small springs anchor plant and animal life.

Vital Ground works to protect and restore habitat for wild grizzly populations in ecosystems where the U.S. Fish and Wildlife Service has designated grizzly bear recovery zones and where state wildlife management agencies have placed an emphasis on conserving the species.