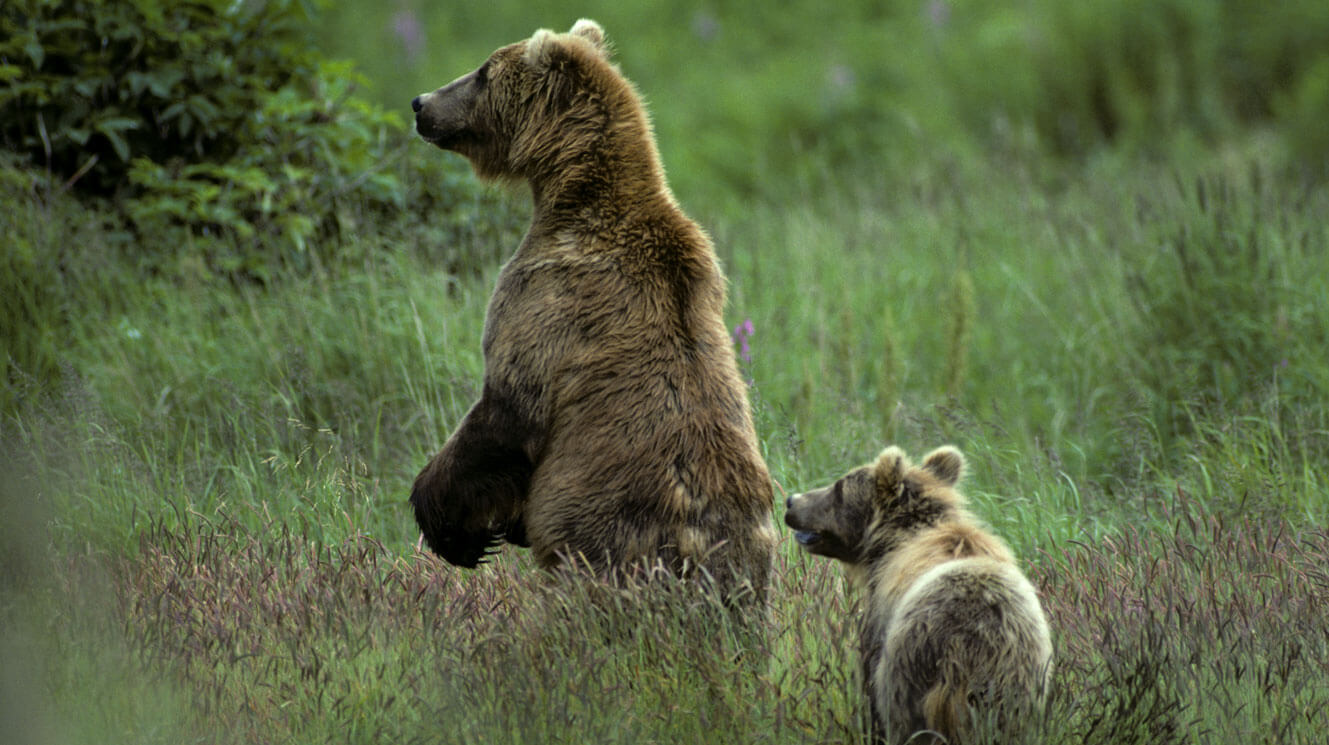 Photo: Philip DeManczuk
In an area of the Selkirk Mountains near several Vital Ground projects, wildlife biologists in Washington state recently collared a female grizzly for the first time in 40 years. Data from the mother bear's movements will help inform future habitat conservation efforts in the Selkirks, where an estimated 70-80 grizzlies endure.

Grizzly bears have an up-and-down history in the state of Washington. From the Selkirk Mountains in its northeastern corner to the mighty North Cascades to the Olympic Peninsula’s coastal range, the Evergreen State boasts vast ecosystems full of prime bear habitat. After a century of fragmentation and persecution, however, scientists now consider the Selkirks to be the state’s only region with a resident grizzly population.

New data will soon help inform conservation efforts for that population. State and federal biologists recently announced that they captured a mother grizzly on the Washington side of the Selkirks and fitted her with a tracking collar. Afterward, she was released and safely rejoined three yearling cubs.

The collaring is especially significant as the sow will become the first female grizzly tracked in Washington in 40 years. State biologists have collared several male bears in recent years, all of them in the Selkirk area surrounding the state’s northeastern borders with Idaho and British Columbia. The Selkirks are home to an estimated 70-80 grizzlies, with about half on either side of the U.S.-Canada line. Last year, one of those grizzlies crossed a Vital Ground project site on the eastern edge of the range in Idaho.

Why is collaring a female important? While male bears—particularly young ones seeking new opportunities for food and mates—are more likely to venture out of the species’ core habitat areas, it’s females who hold the key to reconnecting the grizzly’s fragmented range. The arrival of a new bear to an area only helps if it leads to reproduction and increased genetic diversity for the population. By following the movements of a female grizzly in her reproductive years, there’s a chance biologists could document her moving to a neighboring ecosystem or even staying put and mating with another bear who arrived from elsewhere.

“Seeing bears move is all well and good but what we ultimately want to see is bears moving and reproducing,” explains Wayne Kasworm, the U.S. Fish and Wildlife Service’s lead grizzly bear biologist for the Cabinet-Yaak and Selkirk ecosystems. “Movement alone is not the entire picture. We want to see gene flow and gene flow is represented by reproduction.”

Even if she doesn’t offer evidence of new genetic diversity in the Selkirks, movement data from the grizzly’s collar will provide biologists information about habitat selection for female bears in the region. That knowledge could help inform future habitat conservation efforts as Vital Ground and other conservation partners seek to protect the most crucial places for the Selkirks’ recovering grizzlies.

A prime example is Bismark Meadows, located in the heart of the Selkirks near Priest Lake, Idaho, just a handful of miles from the Washington border. A low-elevation wetland complex, Vital Ground has protected nearly 1,000 acres of habitat there over the past two decades, and we’re currently working to conserve the final portion of the lush wetland that remains unprotected. Biologists have documented at least eight different grizzlies foraging at Bismark Meadows, including multiple sows with cubs, but detailed movement data from a tracking collar could affirm the project’s importance—or help indicate the next crucial haven to conserve.

Vital Ground has also supported habitat conservation farther west in the Washington Selkirks, providing a partner grant for the Western Rivers Conservancy’s 2,400-acre Bennett Meadows project in 2014. Meanwhile, we’ve partnered with several education and outreach efforts to build momentum and preparedness for the eventual return of grizzlies to the North Cascades. While a resident population exists to the north in Canada, biologists have only documented occasional wandering bears in Washington’s portion of the ecosystem. Federal plans to reintroduce grizzlies to the North Cascades remain in limbo after gaining and subsequently losing Interior Department support during recent years.

Will Washington’s first collared female grizzly in decades make a historic trek west? Probably not. She’d be more likely to venture east into the Cabinet or Purcell mountains or south through Idaho toward the Bitterroots. Any of those movements would be a biological revelation of its own, but even if she and her cubs stay put in their corner of the Selkirks, the conservation community will benefit and take heart from knowing a grizzly family is surviving—and hopefully thriving—in Washington.