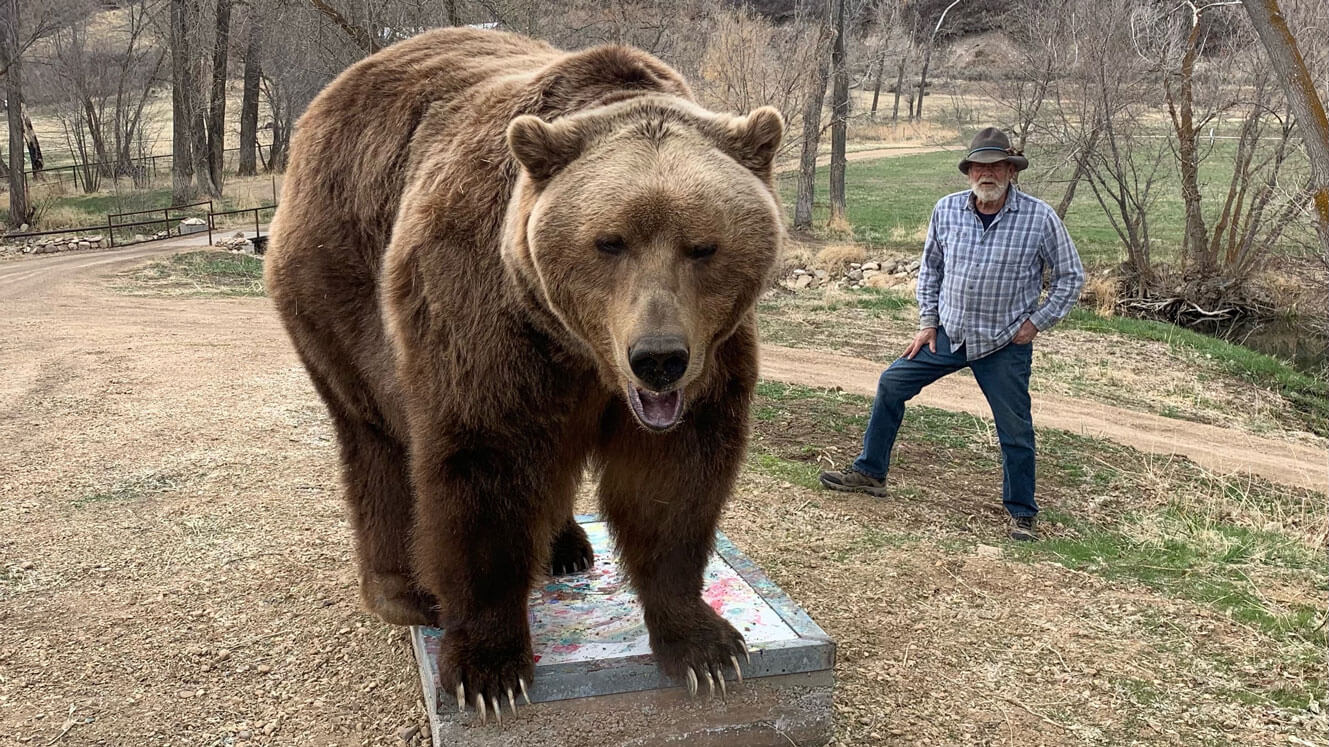 Photo: Lynne Seus
In one of their final photos together, Bart the Bear II and Vital Ground co-founder Doug Seus work on one of Bart's original paintings. Dr. Ratna Narayan won Bart's final painting as part of Vital Ground's partnership with Travel Guide Magazine but chose to donate the art back to Vital Ground to support grizzly conservation.

Every summer, dozens of brown bears gather at Brooks Falls in Alaska’s Katmai National Park and Preserve to fish for salmon. As the fish swim upstream, the bears scoop them from the water with their weighty paws. When the salmon attempt to jump the waterfall, the bears catch them in midair.

Viewers from across the globe can watch these bears throughout the season, thanks to a live webcam feed on Explore.org. Among the most avid viewers is Dr. Ratna Narayan, an associate professor of science education at the University of North Texas at Dallas. She teaches undergraduate and graduate students alike about what it takes to be an educator in the science realm. And in her free time, she loves to check in with the bears. With the help of the cameras, she’s been keeping an eye on them since 2015 — they enchant her.

“I find them very emotive,” Narayan said. “It’s like watching a soap opera. They get mad, they play — they love to play.”

It was through the chat function of the webcam feed that Narayan first heard of Travel Guide, a guidebook publisher for the northwestern United States, Alaska and western Canada. When the publication launched a summer 2021 sweepstakes drawing, she entered, and encouraged all of her students to do the same. The sweepstakes offered prizes ranging from guided fishing days to full Alaskan vacations, but its grand prize had a near and dear tie to Vital Ground: It was a painting, valued at several thousand dollars, made by Bart the Bear II. Bart was a conservation ambassador for Vital Ground, a Hollywood actor, and, it turns out, quite a talented painter (see video below!). This particular painting was his very last creation before his passing in November of 2021. Narayan and her students entered the sweepstakes, and then they waited.

Giving Back for Grizzlies

Before the onset of the pandemic, Narayan found ways to facilitate informal science experiences with her students — trips to the zoo, the arboretum, etc. Covid-19 has brought much of that to a screeching halt.

According to Narayan, the vast majority of her students stay in Dallas to teach. Many schools in the area lack the resources to grant students an immersive science education, but Narayan doesn’t want her pupils to go without these real-life science experiences. To Narayan, science is more than just something to memorize on flashcards —it’s part of everyday life.

“Science is everywhere and in everything that you do,” Narayan said.

So she introduced her students to the Explore livestreams, and the bears of Katmai that she herself had been watching since 2015. As her students observed the bears as part of their homework, they too began to fall in love.

And that’s why her students were excited to learn that Narayan’s entry into the sweepstakes had been the winning ticket. It meant that Narayan would receive Bart the Bear II’s last painting.

But their excited conversations also turned reflective. In the process of entering the drawing, Narayan and her students had become familiar with Vital Ground’s mission of conserving land to help grizzly bears. What could they do, in turn, to further that mission? How could they take their win and continue to help bears — creatures they had grown so fond of thanks to the webcams in Katmai National Park and Preserve?

Narayan, with the help of her students, decided to give the painting they won back to Vital Ground. That way, it can be sold at a future fundraiser, and the funds from the painting can directly make life better for grizzly bears. After watching bears for so long, Narayan says that she feels no claim over the creatures, and yet is greatly impacted by them.

From all of us at Vital Ground, a griz-sized thank you to Dr. Narayan and her students!