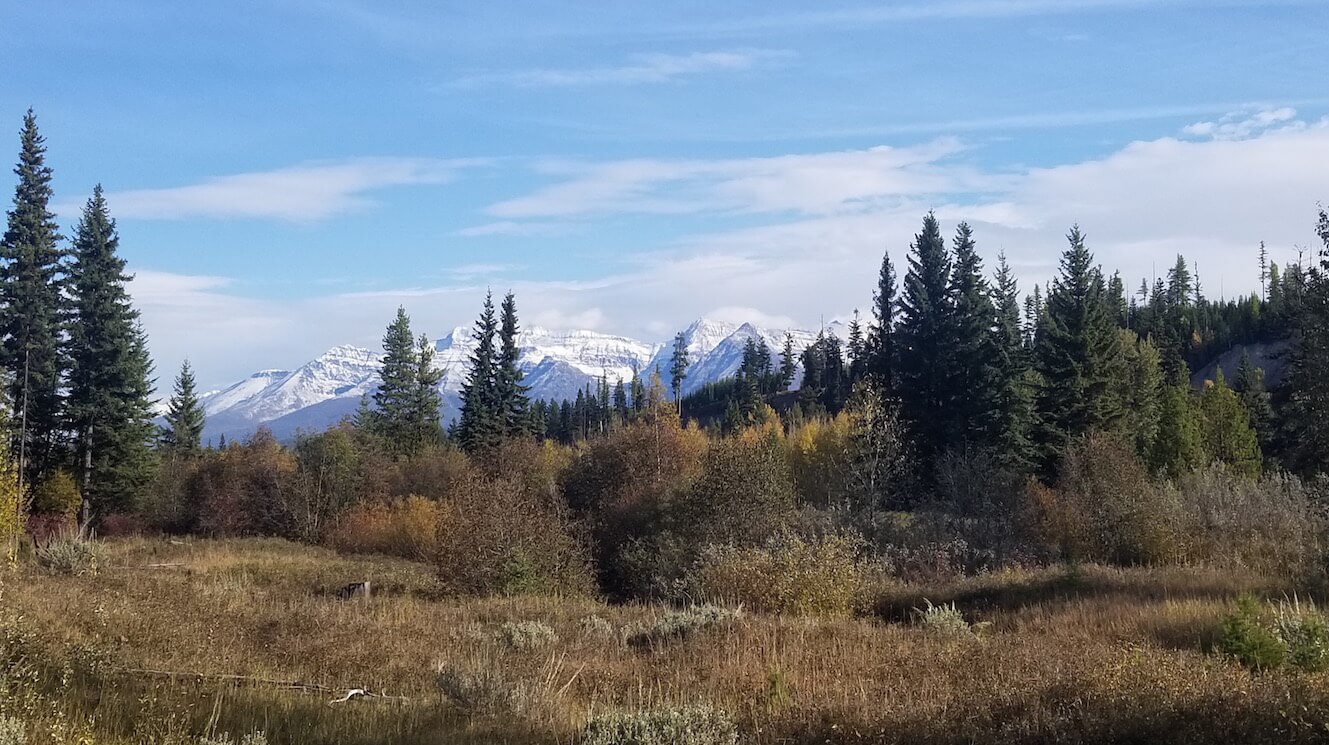 Photo: Mitch Doherty
The peaks of Glacier National Park rise to the east of Montana's North Fork Flathead Valley. Vital Ground and the U.S. Forest Service are partnering to protect a key wildlife habitat corridor and public recreation access with a new conservation project in the North Fork Valley near the village of Polebridge.

Wildlife don’t know the difference between public and private land. On the western flank of Glacier National Park, the jagged slopes of the Livingston Range tumble down toward the North Fork of the Flathead River. A bear, wolverine or moose ranging down those mountainsides will cross out of the park’s boundaries just before it reaches the river. If the animal continues across the bottom of the North Fork Valley, and perhaps up into the Whitefish Mountains, it will traverse a checkerboard of public and private acres.

The North Fork remains part of a thriving, intact wildlife community. It also lies at the doorstep of an international tourist attraction, a national park that hosted more than 3 million visitors in 2019. Subdivision and dense development in the valley would threaten animals’ ability to move freely while staying out of trouble with people. It could also hamper the public’s access to one of the crown jewels of our national park system. That’s why Vital Ground is partnering with the U.S. Forest Service and others to protect public access and habitat connectivity in the heart of the North Fork, near the village of Polebridge.

Last year, we supported Flathead Land Trust and landowners Del and Linda Coolidge on a new conservation agreement protecting 30 acres of open space in a key habitat area. Now, we’re teaming up with the Forest Service to protect a nearby property, totaling around 10 acres. The parcel connects two blocks of adjacent Forest Service lands, making it a valuable addition to the area’s conservation tapestry.

Vital Ground is providing supporting funds to assist the Forest Service with their purchase of the property. The project will utilize the federal Land and Water Conservation Fund (LWCF), a program that dedicates royalty fees from offshore drilling toward conservation efforts. Beyond individual projects, LWCF has given conservationists nationwide a reason to celebrate recently, as it stands on the verge of full and permanent Congressional funding thanks to a bipartisan support effort in Washington.

“This is an outstanding opportunity for collaborative conservation that benefits both people and wildlife,” says Mitch Doherty, Vital Ground’s conservation manager. “With the support of the Flathead National Forest we are bringing more LWCF dollars to Montana to support a growing need for improved public land access and conservation of key wildlife habitat in the North Fork Valley.”

The Polebridge area sees regular traffic from bears, wolves, elk and other wildlife. Connecting habitat and preventing subdivision in this crucial valley bottom will strengthen the linkage between Glacier Park to the east and sprawling Flathead National Forest lands to the west. The new partner project will join a conservation legacy in the area that includes Polebridge Palace, an historic 142-acre forest that Vital Ground and landowners Jim and Lorna Rittenburg protected with help from The Nature Conservancy in 2018.

The partnership also continues Vital Ground’s strong run of collaboration with the Forest Service, which includes the Alvord Lake Community Forest and Weber Gulch projects farther west in Montana. With Montana Fish, Wildlife & Parks also contributing to the Coolidge easement, these new conservation wins in the North Fork are a testament to the collaborative potential of public agencies and the Montana land trust community.