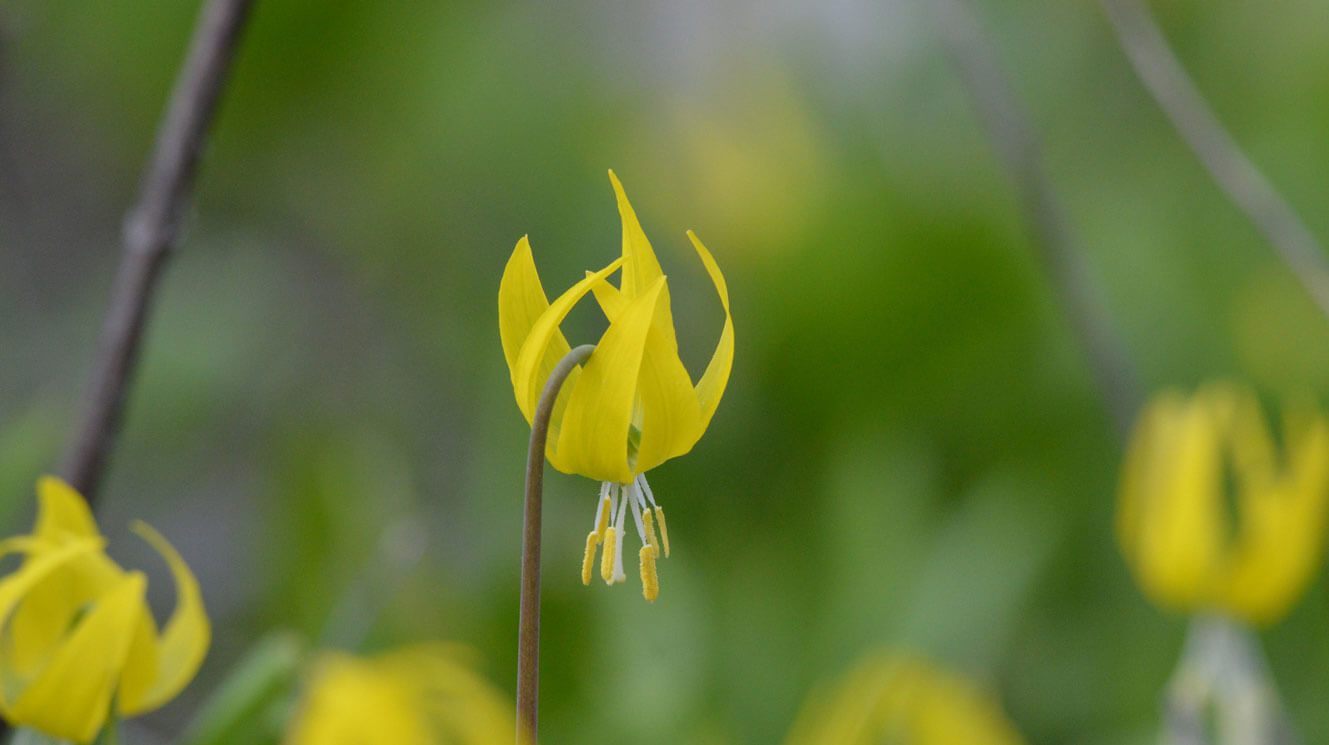 We climbed up Napa Point, approaching the tree line as the forest thinned out, a few ambitious Doug firs and white bark pines clinging onto the ridgeline. I was surprised to see a heavy layer of snow in May, and a bit perturbed, having not thought to bring my gaiters. I was participating Swan Valley Connections‘ Wildlife in the West program, taking nine credits on wildlife conservation and ecology. Today we were out with SVC’s conservation director, Luke Lamar, to learn about the plight of whitebark pine and take advantage of the stunning view to practice with map and compass.

We had already witnessed some incredible wildlife coming up the trail, catching sight of a grouse performing a mating display, feathers spread and humming with deep vibrations I could hardly believe were coming from the bird. But the most surprising find of the day was yet to come.

Turning around a bend was another beautiful field of glacier lilies. But this patch was different, with a large area of meadow completely torn up in front of us. Through the mess of overturned rocks and ravaged dirt we could make out a few tunnels now exposed to daylight.

“This must have been a ground squirrel burrow!” One of my classmates said, “Did a bear come dig it up?”

“Let’s look for tracks!” Someone else responded.

We quickly noticed that the dirt was still damp and that torn up glacier lilies were not yet wilted, meaning the bear could have been there mere minutes ago, or more plausibly, earlier that morning. Not too far from the dig site we made an incredible track observation: a big ol’ grizzly paw, and right next to it, a miniature version. A mother and at least one cub had been there, and maybe secured a tasty ground squirrel meal out of it.

On the surface this is an interaction between two species, the bear and the squirrel. Maybe we can throw the dead glacier lilies in there too. However, if we “dig” in a little deeper there’s far more to this interaction, down to the atomic level.

Grizzlies’ Role in the Environment

At Vital Ground, we like to highlight that grizzly bears are an umbrella species—meaning that they’re able to use many different aspects of their environment instead of just filling a small niche, creating wide-ranging impacts on the species around them. This leads them to have a huge variety in food sources including the expected fish, elk, and berries, but also ground squirrels, roots, and, as we examined in our last bear ecology post, insects.

In order to find ground squirrels and roots, bears use their big sturdy paws and flesh-ripping claws for a gentler task, digging through soil to snack on the morsels inside. By turning over rocks and mixing nutrients around, grizzlies aerate the soil, leading to important changes in plant life. This process reveals a somewhat less-than-intuitive ecological interaction between an apex predator and a meadow’s plants.

What the Research Says

Research done in Glacier National Park by Sandra Tardiff and Jack Stanford demonstrates the impact of bear digs down to the molecular level. The study shows how herbivores and grizzly bears have opposing influences on nitrogen and carbon levels in soil, and how that balances an area’s plant diversity.

If, like me, you occasionally wake up in a cold sweat remembering chemistry classes, don’t fear. It’s pretty straightforward: Herbivores prefer to eat plants rich in nitrogen as opposed to carbon, so the more they consume tasty nitrogen-heavy plants, the more carbon-heavy plants remain.

According to Tardiff and Stanford, animals burrowing in the soil counteracts this loss of nitrogen-heavy plants. By impacting “soil nutrients…soil moisture and temperature, microbial mineralization rates, and plant nitrogen uptake,” burrowing leads to more nitrogen in the soil, and thus more nitrogen-heavy plants for herbivores to enjoy! Bison and antelope demonstrate this process, preferring to graze in areas with prairie dogs, whose burrowing leads to more nitrogen-rich plants. (By the way, while researching for this article I found out that the scientific name of bison is Bison bison. Creative.)

Tardiff and Stanford used this knowledge to hypothesize that grizzly bear digs may mimic the impacts of burrowing. Their research found that grizzlies did indeed have major, long-term impacts on plant life in dig areas. Immediately after a dig plant life is low, with everything ripped out and overturned, but this provides the perfect patch for new plant growth—glacier lilies in particular, which, according to the study, had higher levels of nitrogen in their tissues and twice as many seeds when growing in former bear digs.

The impact on glacier lilies is particularly interesting since they are an important food source for bears. These lilies often grow in avalanche chutes where grizzlies can be found grazing the meadows and digging for the plants’ bulbs. (We can eat them too! They’re not bad, but they also don’t taste like much.)

Tardiff and Stanford posit that without the impact of bears and burrowers, glacier lilies may fade out altogether since nitrogen-heavy sites seem so important to their growth, although they acknowledge that further research would be needed to confirm this.

Experimental digs were also done to mimic a bear dig, and were shown to produce more nitrogen than those without digs, demonstrating that this wasn’t just a matter of bears picking already nitrogen-heavy sites to dig in.

These interactions demonstrate that we can look at grizzlies as even more than habitat generalists or an umbrella species. They not only use all parts of an ecosystem, they create parts of it! I think that means we can award them an official invitation into the elite “ecosystem engineer” club, joining the esteemed beaver, mighty earthworm, and our own species.

Vital Ground harnesses humans’ unprecedented position as ecosystem engineers to create a positive impact for grizzlies and all the species surrounding them. Protecting grizzly bear habitat not only protects that space for other wildlife and plant species, it also allows grizzlies to continue in their important ecosystem-shaping behavior.

The natural world around us is incredibly complex. Each piece of it that we conserve has wide-reaching impacts on countless other species, allowing biodiversity to continue thriving.