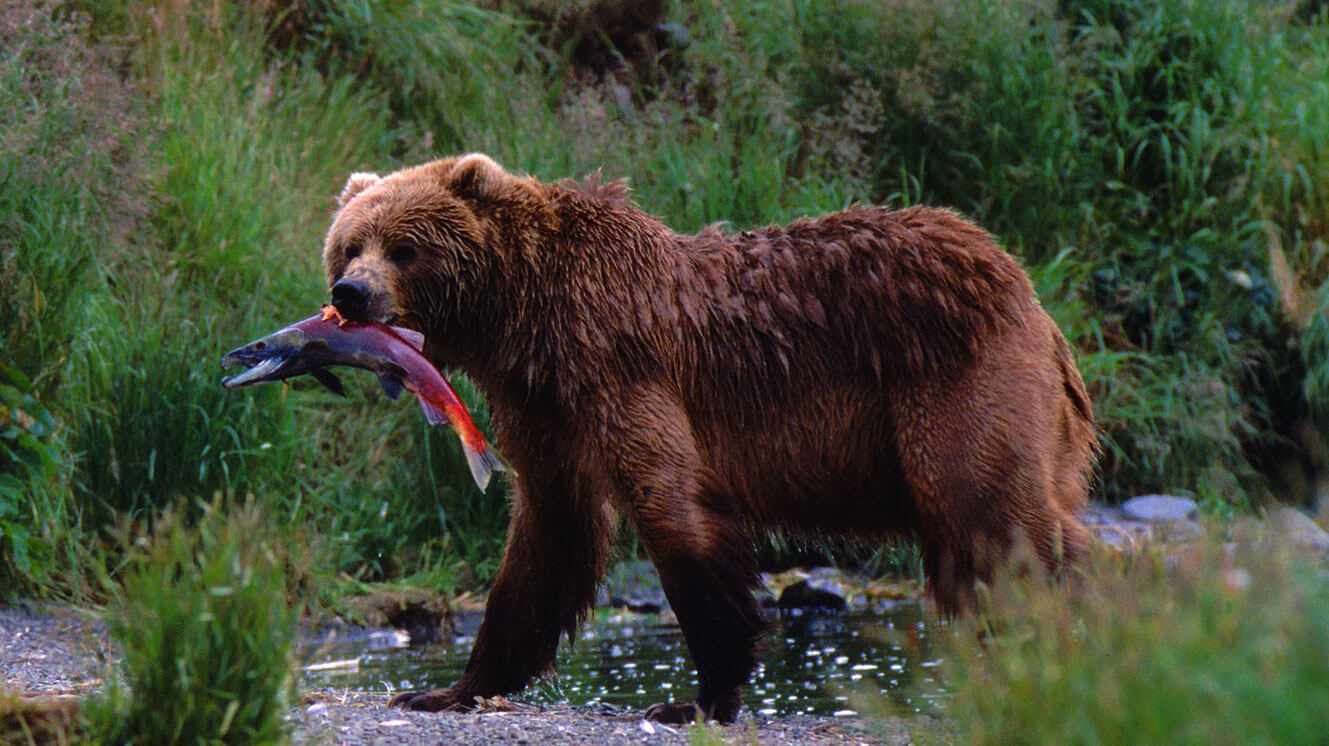 When a bear catches a salmon then takes it into the forest to eat, a cascade of impacts begins. Forest health, water quality and wildlife species all depend on the process.

Grizzly bears live within incredible systems of interaction. For our last post of the grizzly ecology series, I want to delve into one that ties together countless parts of a grizzly’s environment. This web of interdependence starts with an important migratory species, the Pacific salmon.

Pacific salmon are born as tiny fry in freshwater streams, eventually making a long journey to the ocean. After maturing, they’re able to find their way back to the very same stream where they were born to spawn. They travel amazing distances, and upon returning their ecological importance is magnified with the help of bears.

When salmon runs are good, bears can find themselves a fresh dinner without much effort. During these high times, bears eat only the most nutritious parts of the fish, going after fat-rich brains, skin, and eggs. The rest of the carcass is tossed aside, either for an enterprising bird or river otter to enjoy or to decompose.

Decomposition is where things get interesting. Salmon carcasses become a crucial source of forest nutrients in riparian areas (the land immediately around a stream or lake). Amazingly, because bears often carry fish away from the stream banks and a little ways into the woods, decomposing salmon provide up to 24 percent of the soil’s nitrogen in riparian zones. Those following this blog series will remember from the bears and dirt post that nitrogen is a key element for plant growth, making plants larger, stronger, and more nutritious for species that consume them, such as moose, deer, and snowshoe hare.

Researchers describe this process as a marine-to-land nutrient transfer. It can have major impacts on a forest. One study showed that Sitka spruce trees grew three times faster adjacent to streams where this salmon transfer was taking place. With Sitka spruce being the largest species of spruce and one of the largest conifers in the world, that’s a whole lot of tree.

Why Do Bears Move Fish?

So why are bears moving these salmon around in the first place? It seems a lot simpler to enjoy a snack in or beside the stream and then move on to the next fish.

Researchers found that salmon spawn in very specific areas, so while the number of fish increases during peak runs, those salmon stay concentrated in one area. Just like us, bears might prefer to have their own secret fishing hole, but to access high densities of salmon they’re forced to congregate. Grizzlies are typically solitary animals, so fishing together can lead to dominance struggles, with the strongest males trying to take females’ and younger bears’ catches. To avoid this, bears lower in the hierarchy will take their meal into the woods to be consumed at a safe distance.

By catching salmon, grizzlies provide food for scavenging species and crucial nutrients for riparian plants. These interactions are fascinating on their own, but what I find most incredible is that these carcasses ultimately help future generations of salmon as well.

A stable and complex riparian area is essential to a healthy, salmon-supporting stream. Large, numerous trees help prevent erosion by capturing sediments with their root systems and keep streams at cool, comfortable temperatures for salmon by providing shade.

Additionally, large woody debris from trees provide crucial complexity to streams and rivers. An area in a stream with a large root ball or branch allows fry to stay safe from predators and avoid being swept downstream. It also provides spawning locations for salmon to lay their eggs.

Moreover, without bears and scavengers moving carcasses away from streams, too many dead salmon can lead to fungal outbreaks that negatively impact fry. All this means that salmon help each other much more than just as parents and mates. Their carcasses lead to healthier ecosystems and greater survival for their very own species.

Salmon help countless species, first by providing food for predators such as bears, river otters, mink, marten, bald eagles, and others. When those predators take their meal into the forest, carcass decomposition provides nutrients for riparian plants that go on to provide food for browsing species. Salmon even help their own species, and other fish, by creating a healthier stream ecosystem.

None of this can happen without the enormous volume of salmon bears move from streams into the surrounding forests. While other species might move fish as well, their consumption doesn’t come close to what a group of hungry bears can do. This makes both bears and salmon keystone species, a species that an ecosystem relies on to function.

With recent reports of increasingly low salmon runs in British Columbia, it’s more important now than ever to work toward protecting habitat and ecosystem health—not only for the sake of salmon and bears, but also for the many species they impact. And while these impacts are most pronounced on streams near the coast, salmon migrate as far as the high mountain streams of Idaho, where Vital Ground protects crucial inland grizzly habitat. Across Vital Ground’s working area, threatened bull trout also share space with grizzlies and play their own valuable ecological role.

The Importance of Ecology

To conclude this three part series, I’d like to highlight how awe-inspiring these ecological interactions are, and how important it is to protect them. From grizzlies’ impacts on insects and dirt to salmon and riparian ecosystems, I’m struck by how much one species can do to affect the survival of others.

Each piece of a natural system evolves together, creating an enormous array of coexisting life in all corners of an environment. Taking out a piece can lead to a cascade of impacts, throwing off the balance of a system perfectly tuned by gradual change. Amid climate change and the dawning of a fifth mass extinction, it’s crucial to protect whatever parts of these systems we can. By protecting habitat and keystone species, we take steps to prevent extinction and the death of this beautiful tangle of living creatures.

Learn more about Vital Ground and the grizzly’s ecological role…