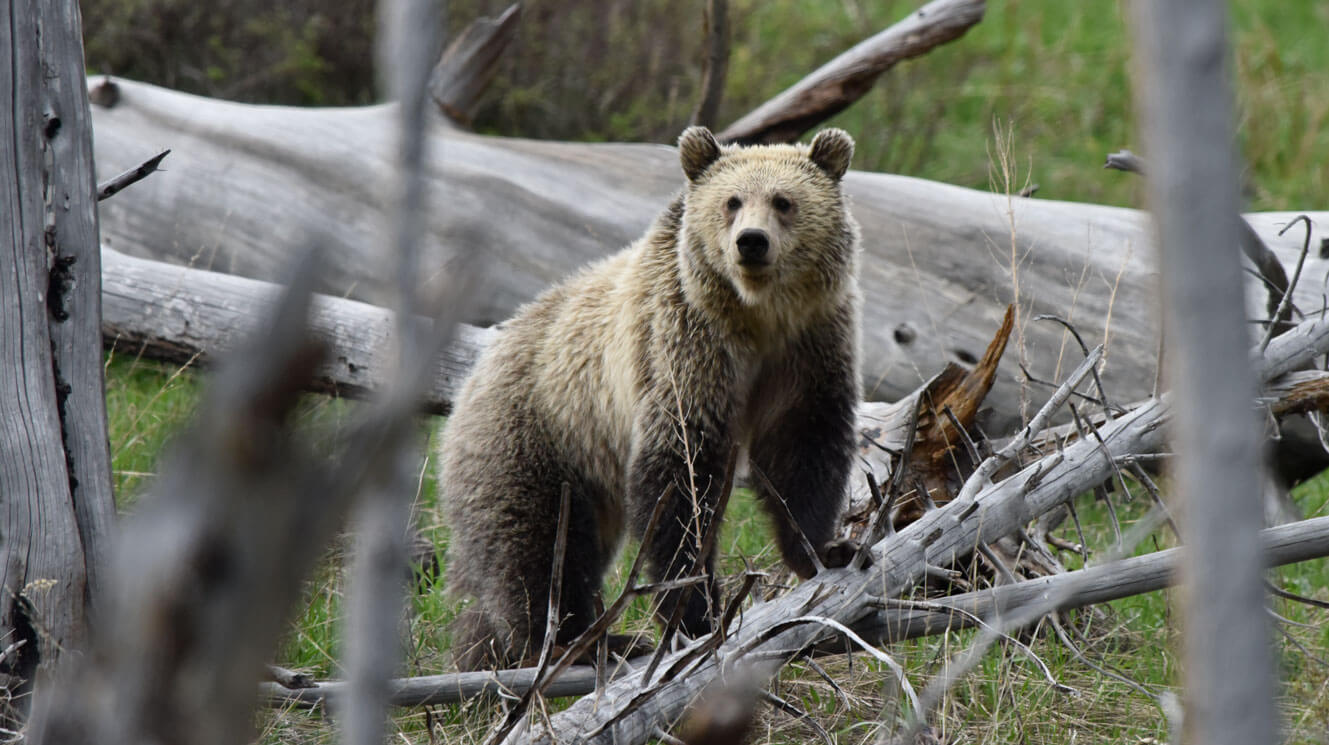 Photo: Paul Lueders
Grizzly bears like this one in Yellowstone National Park regularly forage for protein-rich insects in rotting logs and underneath rocks.

The Macro and the Micro: How Grizzly Bears and Insects Interact

We often describe grizzly bears an umbrella species, since their generalist behaviors lead them to use different types of habitat conducive to a broad range of species. In this bear ecology blog series we’ll examine a few of the ways grizzlies truly act as generalists and impact many different kinds of species in an environment.

To kick us off we’ll look at one of my personal favorites—the intersection of the macro and the micro, how bears and insects interact in surprising ways and have major impacts on each other in the forests, grasslands, and alpine environments they call home.

Grizzlies and Bugs: A Tasty Snack

We often think of bears going after beehives for the sweet, sticky treat of honey. The real reason a bear would seek this source of nourishment, however, is the protein-packed bees and larvae inside. In fact, bears eat all kinds of insects, including ants, termites, bees, and wasps. My first thought when I learned this: how could a food source so tiny be worth getting swarmed by bees? Given their relative size, insects may seem like a surprising choice, but they contain about 80-90 percent protein, while chicken contains about 25 percent. Additionally, thanks to their heavy fur and thick skin, bears have a natural immunity to stings.

Bears will also dig through rotting wood to find the grubs hidden inside. Next time you’re out for a walk in bear country, look closely at any torn up logs—a claw mark or stray hair may reveal the presence of a grizzly or black bear.

For a bear seeking a heavy load of calories after a long winter hibernation, bees become a decent meal, but perhaps not the best. Research has found that insects may not always be a bear’s preferred food, since consumption must be higher in harsh conditions.

For those plugged into the Western Montana conservation scene, you’ll know that the Confederated Salish Kootenai Tribes (CSKT) are some of the most forward-thinking conservationists around. One of their many wildlife protection efforts is the closing of the Mission Mountains Tribal Wilderness from August to early October to allow bears to feed on the cutworm moths that live there.

As the winged bugs migrate from meadows to alpine areas in search of wildflowers, bears bulldoze the talus rock-covered hillsides looking for moths. Without human interruptions, bears are free to spend precious energy on their search for food in the critical months leading up to hibernation. During this period, known as hyperphagia, bears pack on the fat that will provide their only source of nutrition for many months of rest. Brown bears in Alaska can eat a staggering 100,000 calories a day during hyperphagia, equivalent to 1,282 eggs! (Paul Newman has some serious competition.)

I spoke with Dale Becker, a wildlife manager for CSKT, who explained that the closure is an essential part of protecting bears on the Flathead Reservation. He said he’s always known users of the tribal wilderness to appreciate the closure’s value toward protecting grizzlies. In recent years they’ve seen somewhat of a decrease in bears in the talus fields during their observational flights. He explained that this could be due to bad luck on the days they fly or because bears can hear the helicopter from far off. However, he has concerns that due to high grizzly bear mortality, the habit of using that area as a feeding ground isn’t being passed down to younger bears. Vital Ground supports many conflict mitigation efforts, including an electric fencing collaboration with the CSKT, in the hopes of decreasing these mortality concerns and giving bears the best chance we can.

Bears and the Food Web

Recent research conducted in Colorado has uncovered how black bears’ consumption of ants leads to better plant growth, particularly for the pollinator-friendly rabbitbrush. The reduction of ants creates a reduction in herbivorous treehoppers that have a mutualistic relationship with ants, meaning that each species provides a benefit to the other. With fewer treehoppers scientists observed an increase in rabbitbrush in the study area.

This challenges the traditional view of “trophic cascades”—an ecological model with a large predator on top and intermediate levels all the way down to plant life. In this case, instead of a food chain, we can look to the impacts of bears’ insect consumption as evidence of a food web, with complex interactions between many levels. As stated in the study, “[d]isturbances to predators can destabilize food webs and alter ecosystem functioning…”

Vital Ground and the Habitat Umbrella

The deep connection between bears and insects goes to show how crucial Vital Ground’s habitat protection work is for not only grizzlies, but also the many species—both large and small—that share the Great Bear’s range. Protecting and connecting key habitat benefits all walks of life, and it comes back to impact our own lives, too. The evolution of the landscapes we enjoy and thrive off of today does not occur in a vacuum—each piece interacts with each other in countless ways. To remove any species is to alter that balance and have impacts we may have yet to discover.