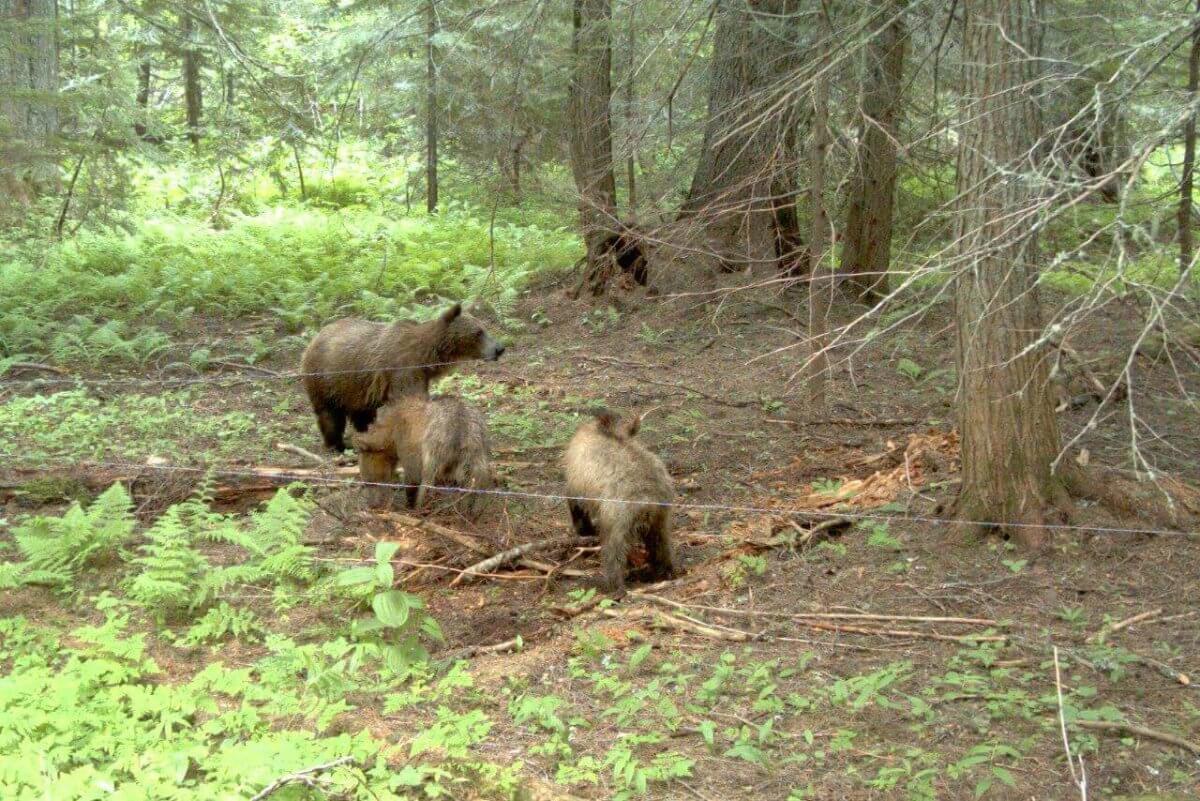 Photo: Wayne Kasworm/U.S. Fish & Wildlife Service
In the Selkirk Ecosystem's neighbor to the east, a trail camera in the Cabinet-Yaak Ecosystem shows a sow grizzly and two cubs at a hair corral site used to collect DNA samples.

Moving grizzly bears is no easy task. It’s far better to let them move themselves.

That’s the takeaway from a new study published in The Wildlife Society’s Journal of Wildlife Management. The investigation analyzes 40 years of grizzly translocation events performed in Alberta, Canada. It determines that out of 110 attempts, just 33 translocations—or 30 percent—succeeded.

That conclusion supports some long-established foundations for our work here at Vital Ground. Wildlife managers use translocation both to remove problem bears from an area and to bolster recovering grizzly populations. In either case, the new research demonstrates that relocating bears is far from a cure-all.

On multiple fronts, Vital Ground mitigates the need for translocation attempts. We work to stop bear-human conflicts before they happen, helping reduce the number of problem bears that require relocation. Meanwhile, moving bears across ecosystems to help struggling populations recover is expensive and risky. Instead, grizzlies need enough connected and protected habitat to allow natural movements and gene flow between subpopulations.

In other words, they need the kind of corridors that Vital Ground and our partners are working to conserve.

Wildlife managers have long known that translocations are not guaranteed to succeed. “Did the bear stay?”, “Did it stay out of trouble?” and “Did it reproduce?” are the usual questions for evaluating a move, and the new study keeps that baseline, deeming a translocation successful if the bear did not require “further management action” and survived at least a year without attempting to return home.

But lead author Sarah Milligan and her team also dig deeper, using tracking data to compare the range size, habitat selection, and denning behavior of moved bears to their counterparts. They find that while bears new to an area denned similarly to longtime residents, transplants are far more mobile than established bears, creating an average home range 3.25 times larger than grizzlies native to the area.

This finding is troublesome, as a transplanted bear ranging farther than its counterparts is more likely to stumble upon developed areas and human conflict. That’s especially fraught when bears are relocated to bolster a struggling population in a fragmented, conflict-prone landscape, like the Cabinet-Yaak Ecosystem of northwest Montana. With smaller habitat cores than other recovery zones, a wandering grizzly new to the Cabinet-Yaak could easily stumble upon human development, putting in jeopardy the costly effort to move the bear.

That’s where Vital Ground comes in. Our Conservation Partners Grant Program helps stop conflicts before they happen, supporting community-led projects like electric fencing, bear-proof waste containment, range rider programs and more. These efforts lower the need for relocating problem bears and, when grizzlies are moved to aid another population’s recovery, they help the adjusting transplant stay out of trouble.

Despite the low success rate, translocation will remain an option in the toolbox of wildlife managers. In Washington’s North Cascades Ecosystem, for example, moving bears from other populations would be a necessary step if managers approve a grizzly reintroduction plan for the area. (See more on this topic in the video below.)

The new study could help such translocations work. It finds that the farther the move, the more likely it is to succeed, and that translocations are more successful when performed earlier in the year, giving the bear more time to learn the area before fall calorie-loading and winter denning.

But with less than a third of all translocations successful, the larger message is clear: grizzlies have a much better shot at strengthening their populations and reclaiming historic range when they move at their own will, and when communities chip in to help them stay out of trouble.

You can help make that happen.