While the vast Selway-Bitterroot region awaits the return of a resident grizzly population, we’re building the corridors from other ecosystems that will help bears get there naturally.

Vital Ground has not completed any projects within the Bitterroot, but our work on the edges of the Cabinet-Yaak, Northern Continental Divide and Greater Yellowstone ecosystems improves grizzlies’ chances of moving safely into the region. 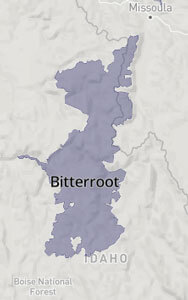 Vital Ground protects and restores habitat for grizzly bears and other wildlife, connecting the wild strongholds of the Northern Rockies. We group our projects based on the grizzly’s six federally-designated recovery zones, working to link these core areas into one resilient landscape.