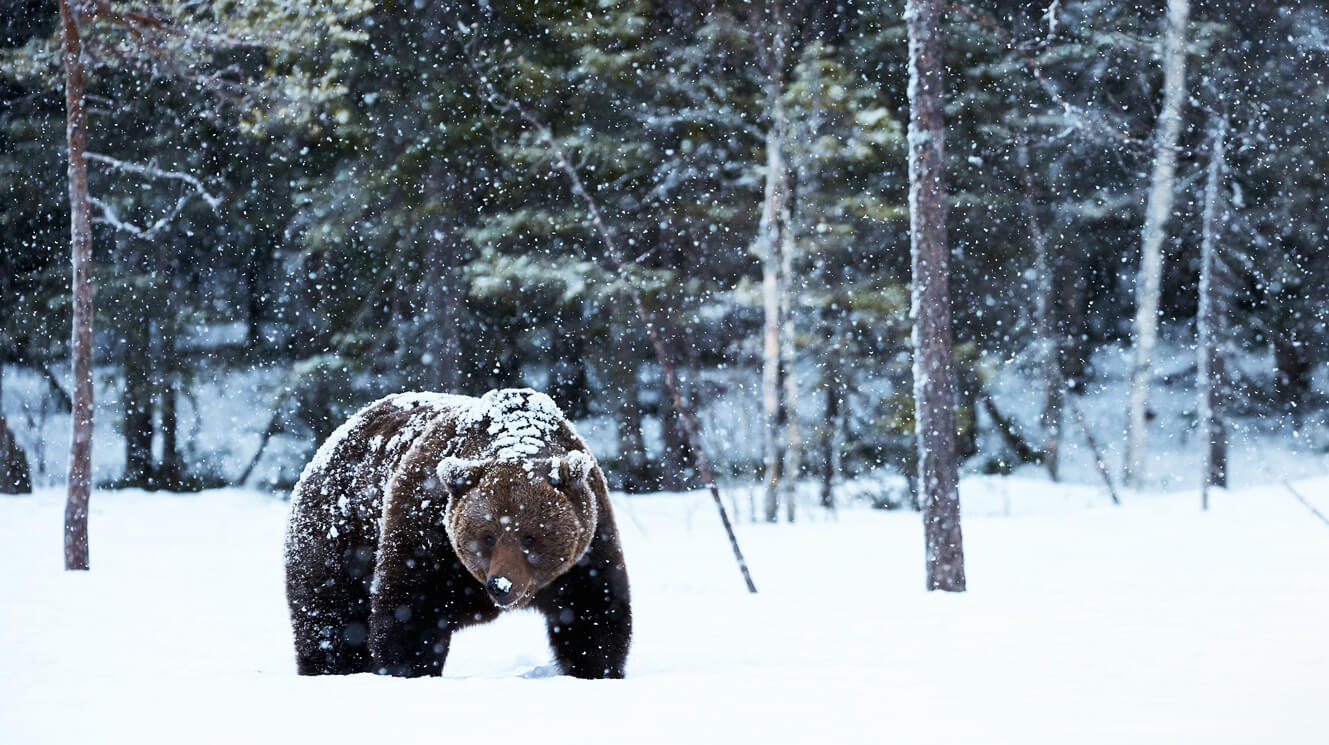 When the snow starts piling and temperatures drop, grizzly bears begin preparing their dens for winter hibernation, or "torpor," if we're being precise.

Making your bed can be a pain, and nobody knows that better than the grizzly bear. Each fall a grizzly moves an incredible one ton of material to make its den. By January, bears in the Northern Rockies are taking full advantage of their cozy winter homes, settled into a long slumber until spring. This is commonly referred to as hibernation—but is that really the right description for their winter retreat?

Experts say that hibernation isn’t quite the accurate term for a bear’s long winter rest. True hibernators include squirrels, mice, and bats, who experience long periods of deep sleep, heart rate decreases, and a drop in body temperature. That last component is where bears miss the hibernation benchmark, with body temperatures dropping only slightly from their summer averages. The technical term for their winter sleep is instead “torpor” which refers to a long period of rest without a completely dormant state. (We’ll stick to hibernation here, since it’s commonly used and a pretty close description.)

Despite not truly hibernating, grizzlies undergo some pretty incredible changes during their winter rest. Their heart rate drops from a typical 40-50 beat per minute to 8-19 bpm. For comparison, a human’s sleeping heart rate ranges from 40-100 bpm. Grizzlies are well adapted to hibernation, losing 15-30 percent of body weight but experiencing little muscle and bone loss despite remaining inactive for many months. Research to understand their incredible anatomy is ongoing, with many scientists hoping to apply the findings to medicine.

Grizzlies experience three distinct phases in a year. Normal activity in the spring and summer; autumn hyperphagia, when bears pack on the pounds to prepare for winter; and hibernation. Hibernation can last anywhere from 4-7 months, triggered by seasonal food shortages, cold temperatures and snow cover. When the going gets tough, the tough get…sleepy.

Time spent hibernating depends on environmental conditions and the sex and reproductive status of a bear. Males spend the least amount of time hibernating, while females with newborn cubs spend the most. It’s thought that this longer hibernation helps the cubs grow larger and stronger before leaving the den. Environmental conditions play another major role in hibernation length. Black bears in Mexico may only hibernate for a few weeks compared to six months or more for grizzlies in northern Alaska. Researchers have found that for grizzlies in western Canada, autumn food supply and spring temperatures are most closely correlated to den entrance and exit times.

Incredibly, hibernation is also when grizzlies give birth. Mating takes place from May to July but embryonic implantation is delayed until December. A mother grizzly then gives birth in late January or early February. It’s a good thing the cubs are safe in the den since grizzlies are basically born as sentient jelly beans: blind, hairless, and less than one pound. They then grow rapidly and exit the den at three months, weighing 4-8 pounds.

Grizzly bears dig a new den almost every year, only rarely returning to a previous den. It’s no simple task. Bears spend 3-7 days digging, moving up to a ton of material. They then bring in bedding material, such a tree boughs. Much like a sleeping pad, this isn’t just to make the ground softer. Bedding helps trap body heat and keep the bear warm all winter.

In Yellowstone National Park, dens have been found almost exclusively on north-facing slopes. With less exposure to the sun, snow accumulates on these slopes and helps insulate dens from temperatures as low as -60°F. Brrrrr. Temperatures that cold require some serious design and planning. Inside the den, there’s a tunnel that leads to a main chamber. These spaces are just large enough for the grizzly to squeeze through to trap heat. Many bears even dig the tunnel upward to a higher chamber, which helps retain heat. Others go for a less thermodynamic design with a lower chamber and downward sloping tunnel.

Like so many things in nature, a bear’s hibernation is finely tuned to seasonal variation and long-standing natural patterns. Unfortunately, human-driven climate change affects grizzly hibernation for the worse. Rising spring temperatures throw off a bear’s signal to exit the den. Researchers have observed grizzlies exiting about ten days earlier due to the changes in temperature. For vulnerable newborn cubs, this is a serious problem: they need all the time they can get to grow strong before facing the big bad world. Further, humans are the largest cause of grizzly bear mortality. The more time they spend safely out of reach in their dens, the better off grizzlies might be.

At Vital Ground, we’re committed to giving grizzlies safe, connected habitat in which to thrive. At our Bismark Meadows Project in northern Idaho, for example, biologists have documented at least eight different bears frequenting the area during spring green-up, including several mothers with newborn cubs. Because Bismark Meadows is a rare, low-lying wetland free from development, it sees some of the region’s earliest plant growth each year, making it a safe haven where bears can begin the year’s foraging.

By protecting land and working toward bear-related conflict prevention, we help give grizzlies their best shot at growth and survival. Your support makes this possible, and you can also help grizzlies by staying bear aware while outdoors—even in the winter! Since grizzlies don’t enter a full hibernation it’s possible for them to wake up, especially if disturbed. Carrying bear spray and watching out for tracks and signs of bear activity is always recommended.

If you want to nerd out even more about the science behind hibernation, check out Yellowstone National Park’s page on the subject. Here’s to a long happy sleep for our bear friends. We’ll catch them again in the spring!

Learn more about grizzlies and the threats they face…