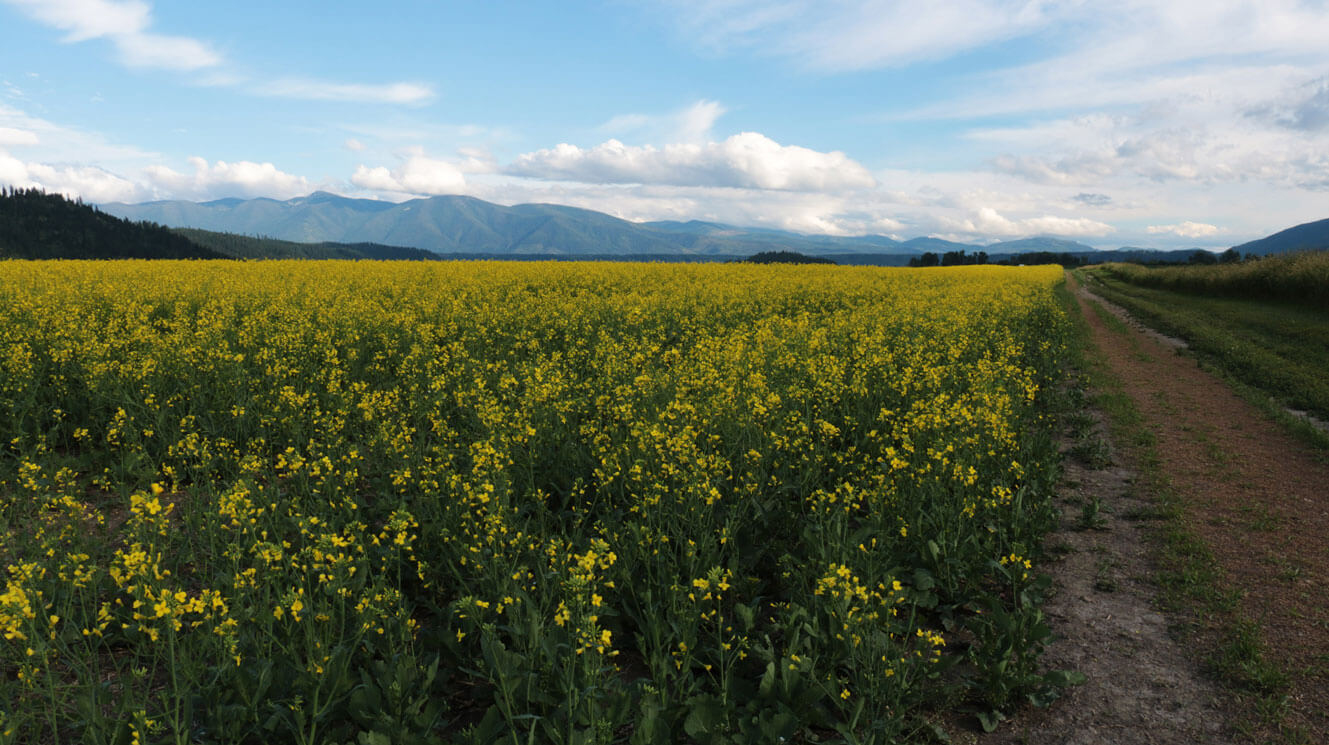 Canola grows beneath the Selkirk and Purcell mountains on the Hubbard Family's farm in northern Idaho's Kootenai Valley. Part of a crucial wildlife corridor connecting mountain ranges, the 1,040-acre farm will remain in agriculture and open space through a conservation easement with Vital Ground completed last week.

BONNER’S FERRY, Idaho – At the top of the Idaho Panhandle, 1,040 acres of rich farmland and wildlife habitat will remain in agricultural production for generations to come after the Hubbard family and The Vital Ground Foundation completed a voluntary conservation agreement last week for the family’s farm along the Kootenai River.

With major support from the U.S. Department of Agriculture via the Agricultural Land Easements program of the Natural Resources Conservation Service (NRCS), the pact maintains the Hubbard farm’s working landscape that also serves as a habitat link for wildlife traversing the Kootenai Valley between the Selkirk and Purcell mountains. During a period of intense real estate growth and development in Idaho, the project ensures the farm will remain contiguous open space, protecting the valley’s rural and scenic character. Those community benefits led to the M.J. Murdock Charitable Trust joining NRCS as a lead supporter of the effort.

“This is what I want my legacy to be and what I know my dad would want, for this to stay the way it is now,” says Wes Hubbard, whose family has lived and farmed on the property since his early childhood. “We’ll always know that it will be farmed.”

As the subdivision and development of farms and other open spaces continues in many parts of the Mountain West, agricultural lands carry a double role, maintaining both rural farm-based communities and habitat for wildlife. In valleys like the Kootenai that connect mountain ranges and public forestlands, movement channels across working lands are especially vital to wildlife species ranging from bears and wolves to deer and elk, with the Hubbard farm identified in Idaho’s State Wildlife Action Plan as particularly valuable winter range for elk.

The combination of open space values made the Kootenai Valley Linkage Project a priority for both Vital Ground and the NRCS, which provided half the project cost. Those funds came from the 2018 Farm Bill, which allocates $450 million annually toward conservation easements. NRCS easement programs support landowners who want to steward their land to benefit both agriculture and the environment.

“NRCS Idaho is pleased to have been able to partner with the Hubbard family and The Vital Ground Foundation to protect this working farm and keep it in agriculture production indefinitely,” says Erin Brooks, Acting Easements Coordinator for the NRCS in Idaho. “We are happy to be able to conserve agricultural ground while keeping farms and ranches controlled by the farmers themselves.”

Resilience for Bears and Biodiversity

As climate change destabilizes habitat features like snowpack and plant food availability, biologists predict an increased need for many wildlife species to travel farther to meet their needs. That makes conserving valley corridors like the Kootenai a natural source of climate resilience. Moreover, the valley’s particular low-elevation setting and lush plant life make it a source of climate refugia—biologists’ term for habitat zones projected to change less under different planetary warming scenarios.

These elements allowed the Kootenai Valley Linkage Project to receive additional support from the Pacific Northwest Resilient Landscapes Initiative, a partnership of the Doris Duke Charitable Foundation, Land Trust Alliance, Oregon Community Foundation, Idaho Community Foundation, and Seattle Foundation. Additionally, Vital Ground and the Hubbards plan to partner with the U.S. Fish and Wildlife Service and Idaho Department of Fish and Game to convert several areas of less-productive ground on the farm into vegetated stop-over habitat.

The farm runs up against the Kootenai River on its west side, spanning much of the valley bottom and abutting other conserved lands that combine to form a viable intermountain corridor for wildlife. That connectivity is especially vital for grizzly bears, with biologists estimating just 50-60 grizzlies enduring in the Selkirks, 25-30 in the American portion of the Purcells, and a similar number in the neighboring Cabinet Mountains. These three fragmented groups form the species’ smallest and most vulnerable populations in the lower 48 states.

The Hubbard farm’s importance as part of a crucial wildlife corridor for grizzlies and many more species make it a key project in Vital Ground’s One Landscape Initiative. In  connectivity areas like the Kootenai Valley, the organization is pursuing strategic conservation on privately-owned lands that connect the wild strongholds of the Northern Rockies, from northern Idaho and western Montana south to the Greater Yellowstone area.

“Vital Ground recognizes that farms and ranches across the region provide the habitat wildlife need,” says Vital Ground’s conservation director, Mitch Doherty. “It’s a win-win-win situation for landowners, the agricultural community and wildlife when we can put Farm Bill dollars to work on the ground in places like the Kootenai Valley.”