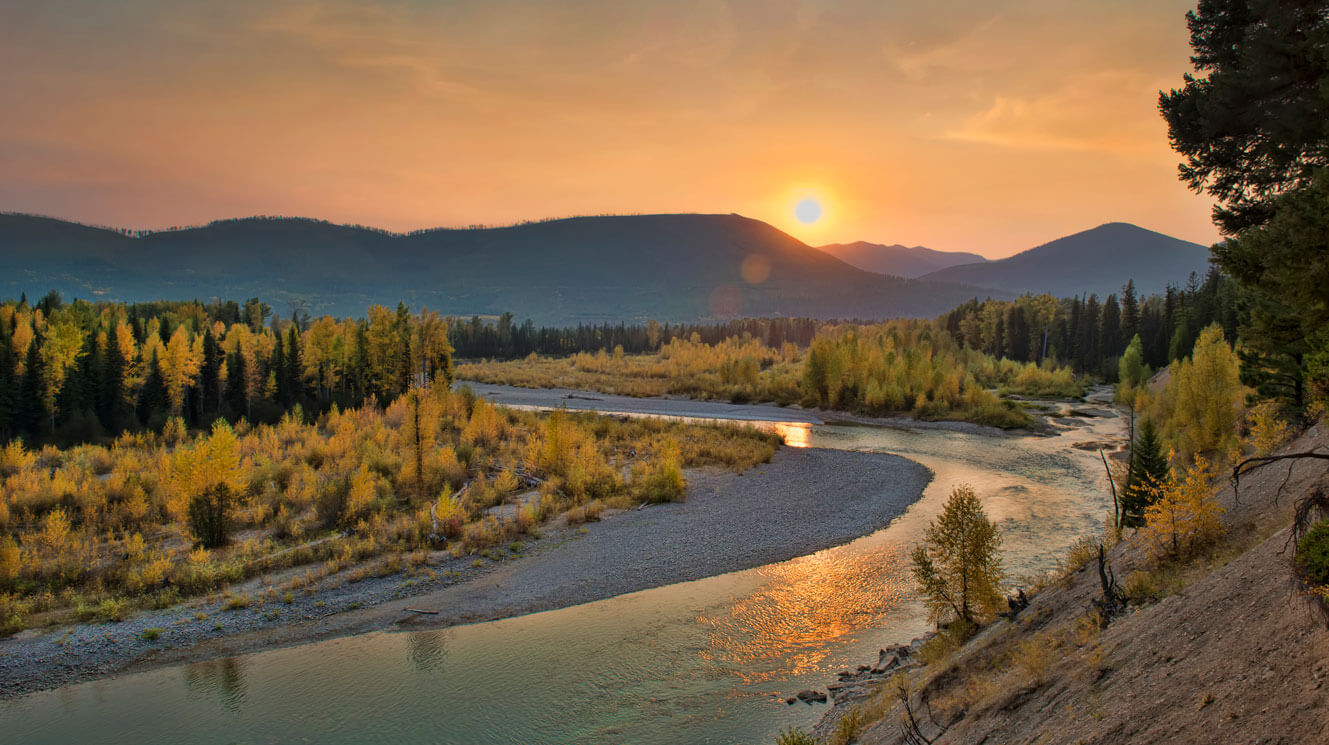 Sunset over Montana's North Fork of the Flathead River, which forms the western boundary of Glacier National Park. Vital Ground teamed up with Flathead National Forest to conserve a key 10-acre parcel near the river that maintains public access and wildlife connectivity between Glacier and the Whitefish Mountains to the west.

A grizzly bear doesn’t know the difference between public and private land. Ranging down the western slopes of Glacier National Park toward the North Fork of the Flathead River, a bear—or a wolverine or moose—will eventually cross out of the park’s boundaries. If the animal continues all the way to the bottom of the North Fork Valley, and perhaps up into the Whitefish Mountains on the river’s far side, it will cross a checkerboard of privately-owned property.

The North Fork Valley remains part of a thriving, intact wildlife community, but subdivision and dense development threaten the ability of animals to move freely while staying out of trouble with people. That’s why Vital Ground was eager to support Flathead Land Trust and landowners Del and Linda Coolidge on a new conservation agreement protecting 30 acres of open space in a key habitat area near the village of Polebridge.

Adjoining other conserved lands, the Coolidge property sees regular traffic from bears, wolves, elk and other species. Its protection maintains a stable wildlife corridor around the popular Polebridge area, helping link the valley bottom with Glacier Park to the east and Flathead National Forest lands on either side of the river. Another part of this conservation tapestry is Polebridge Palace, an historic 142-acre forest that Vital Ground protected in 2018.

Having teamed up with Flathead Land Trust on several other conservation wins in the area, Vital Ground’s partner grant toward the Coolidge easement helped cover various project expenses. The grant was one of 13 Vital Ground partnerships fueled by supporters like you in 2019. Montana Fish, Wildlife & Parks also contributed to the North Fork effort, continuing a strong legacy of collaboration between public agencies and the Montana land trust community.

“Hopefully, our modest contribution will inspire other landowners to protect part or all of their land with a conservation easement that benefits future generations by preserving a unique ecosystem,” the Coolidges said, as reported by the Daily Inter Lake.