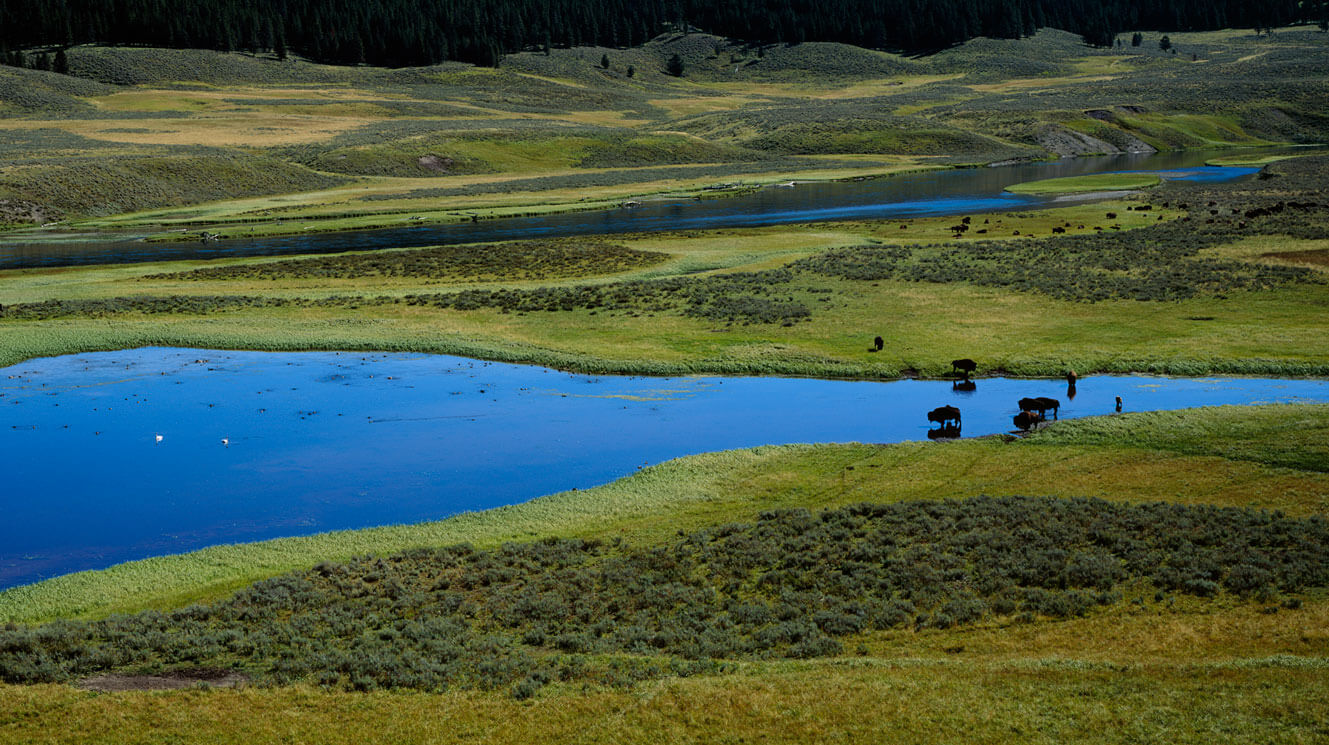 Photo: Thomas D. Mangelsen
From Yellowstone National Park (pictured) and its surrounding ecosystem across Montana's diverse natural and human communities, the Cinnabar Foundation has a wide and enduring conservation impact, including crucial support for numerous Vital Ground projects dating back to our earliest habitat protection efforts.

Longtime Conservation Fund a Crucial Teammate in One Landscape Vision

Just as it takes a diverse range of species to make a healthy ecosystem, conserving those landscapes requires broad collaboration by diverse partners. From boots-on-the-ground coexistence work by nonprofit, state, tribal and federal partners to collaborating with landowners, artists and charitable foundations, Vital Ground’s conservation work for grizzly bears and other wildlife is truly a team effort. And since our earliest days, one of Vital Ground’s steadiest teammates has been The Cinnabar Foundation.

“When you protect grizzly bears that also protects so many other species and natural processes,” says Caroline Byrd, Cinnabar’s executive director. “Vital Ground is so effective and far-seeing because it provides a unique niche in being one of the preeminent grizzly bear conservation organizations but also being a land trust with a crucial strategy of protecting private lands.”

Breadth and Depth in Conservation

Before Vital Ground began conserving land for wildlife, the Cinnabar Foundation emerged as an early conservation leader in Montana. Named for the Cinnabar Basin outside Yellowstone National Park, Len and Sandy Sargent created the foundation in 1983 to support the constitutional right of Montanans to a clean and healthful environment. Since then, it has grown a reputation as “Montana’s Conservation Fund,” awarding nearly 2,200 grants totaling over $9.6 million to 330 conservation partners. Cinnabar’s impact can be felt across Big Sky Country, from forests and working lands conserved by land trust partners to environmental education classrooms to communities planning for a more sustainable, climate-smart future.

“If you pull on one species or one issue, you realize it’s connected to everything else,” says Byrd. “What I love is the connectivity that Cinnabar provides, from sustainable agriculture to private lands, public lands, water quality and fisheries, environmental advocacy. We have tentacles among the whole conservation community, and that breadth and depth provide an incredible foundation.”

Vital Ground and Cinnabar discovered each other as like-minded foundations shortly after Vital Ground’s founding in 1990. Early support from Cinnabar helped us invest in our first partner projects to conserve grizzly habitat in the Northern Rockies. In 2005, when Vital Ground moved its headquarters from Utah to Montana and adopted the land trust model we carry today, Cinnabar became an even more crucial collaborator. Nearly every year since the move, Cinnabar’s support has advanced Vital Ground habitat protection projects, with more than a dozen key landscapes now conserved thanks to the partnership.

“The Cinnabar Foundation has an inspiring and long-standing commitment to habitat protection,” says Kim Davitt, Development Director for Vital Ground. “Their funding of land trust work in Montana has permanently protected thousands of acres of wildlife habitat and been integral to Vital Ground’s conservation goals.”

Most recently, Cinnabar’s partnership has advanced projects crucial to Vital Ground’s One Landscape Initiative, a strategic push to conserve 188,000 key acres on private lands that connect the Northern Rockies’ wild strongholds. Several Cinnabar grants backed phases of the Wild River Project in Montana’s Kootenai Valley and in 2021, Cinnabar’s support was integral to conserving 80 key acres in a habitat corridor near the confluence of the Clark Fork and Bull River.

“Cinnabar’s vision for Montana and Greater Yellowstone correlates nearly perfectly to Vital Ground’s One landscape Initiative,” says Ryan Lutey, Executive Director of Vital Ground. “Both entities are working to keep that landscape intact and connected for wildlife and people, and both know that protecting the environment and the region’s myriad natural resources are key to attaining their goals.”

One Landscape requires broad collaboration, but it promises a more resilient and connected future for people and wildlife alike. Those goals align with Cinnabar’s view of the work ahead. Pushing back against ongoing narratives of cultural division, the foundation sees its scope only broadening.

“When we reach out to all our communities and build bridges—not just in Missoula and Bozeman and Helena, but in our tribal and rural communities—that’s how we build enduring success,” says Byrd. “What we’re facing in climate change and habitat loss is not just scientific but also political. We win when it’s nonpartisan, when we relate to the conservation values we all share.”

Cinnabar began building its legacy on those values during an earlier chapter of the conservation movement. At the time, grizzly bear recovery in the Lower 48 remained an infant endeavor. Less than 1,000 bears persisted in the region, their populations fragmented between the sanctuaries of Glacier and Yellowstone national parks. While Cinnabar’s impact extends far beyond grizzlies to entire human and wildlife communities, its conservation efforts have coincided with the return of the Great Bear to more of its historic range and the healthier ecosystems that accompany grizzlies’ presence.

In a year still to come, when the first Yellowstone and Glacier-area bears meet in the middle and reunify a durable regional population, many sets of hands will have played a role. One of the sturdiest will belong to Montana’s original Conservation Fund.