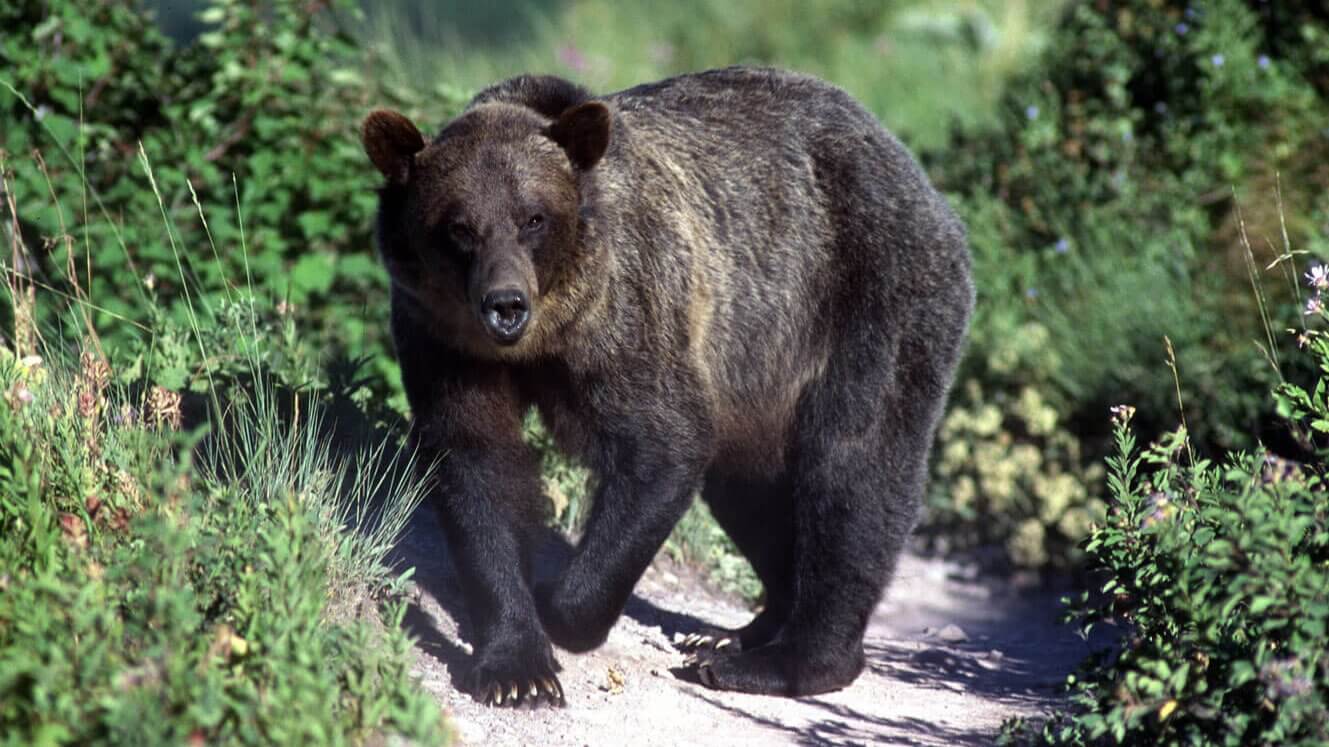 Photo: Jim Cole
As grizzly bears expand from core recovery areas onto more of their historic range in the Northern Rockies, they are crossing paths with people more often. Many conservation partners are working hard across the region to prevent conflicts and spread coexistence practices so bears and people can share the landscape safely.

How a Young Grizzly’s Relocation Could Help a Whole Ecosystem

There’s a new griz in the Cabinet-Yaak Ecosystem. His job? Get comfortable, stay out of trouble, and find a mate—perhaps with a little help from his friends.

The bear’s arrival occurred on April 28, 2018, when Montana Fish, Wildlife & Parks (FWP) officials relocated a young male grizzly from the Lake McGregor area west of Kalispell, Mont., to a remote drainage in the Yaak Valley region of the state’s northwest corner. According to a report from the Daily Inter Lake, homeowners had repeatedly seen the 3-year old bruin near Lake McGregor residences and the bear had eaten bird seed and garbage, prompting the FWP relocation.

Transplanting a problem bear is customary practice for FWP and bear managers everywhere. What’s less common is the arrival of new grizzly genes in the Yaak, and that’s why this relocation effort has the chance to accomplish much more than keeping a bear out of the trash.

The subadult male grizzly was born in the Northern Continental Divide Ecosystem, a vast complex of wild country around Glacier National Park and the Bob Marshall Wilderness. According to the U.S. Fish and Wildlife Service, about 1,000 of the big, silver-tipped bears currently live in the ecosystem, making it the largest subgroup of grizzlies in the Lower 48 states.

It’s a different story in the Yaak. With no national parks or wilderness areas, this rugged corner of the state is home to only about 25 bears, according to recent Fish and Wildlife Service estimates. Across the Kootenai River Valley, where roads and houses impede wildlife travel, the Cabinet Mountains are home to another two dozen or so grizzlies. The two groups rarely comingle, but biologists combine them into one subpopulation for management purposes. That group, the grizzlies of the Cabinet-Yaak Ecosystem, represents the iconic species’ most threatened population in North America, with genetic studies in recent years showing the isolated bears at high risk of inbreeding and eventual extinction.

A young male from the Northern Continental Divide Ecosystem could help change that. But he may need outside support.

Moving a grizzly bear from one ecosystem to another—what biologists call translocation—is a risky endeavor. A recent study from Alberta, Canada, concluded that only one out of three translocations typically succeeds, with the moved bears frequently turning tail from their new climes and wandering back to their original home range, sometimes covering great distances to do so. If they do stick it out in their new location, the newcomer may still struggle in competing for a mate and new territory and may wind up stumbling upon human developments as a result, becoming a problem bear once again.

Our recent blog post describes the study’s findings in greater detail, but suffice it to say that after a translocation of about 50 miles, the new Yaak bear could use some help if he’s to remain in his new home and diversify its gene pool.

As it turns out, Vital Ground and our partners are in position to provide that help.

Rider to the Rescue

Under our expanded Conservation Partners Grant Program, one of our new collaborative projects for 2018 is a Range Rider program in and around Trego, Mont. Located due east of the Yaak in between the Northern Continental Divide and Cabinet-Yaak ecosystems, the Trego area has seen more grizzlies of late, as bears from the growing Glacier-area population are expanding their range. That has led to increased conflicts with ranchers and homeowners, prompting a collaborative group of citizens, wildlife managers and nonprofits to propose and fundraise for a professional Range Rider. The new manager will help prevent bear-related conflicts by monitoring grizzly travel, helping quickly collect and remove dead livestock, and improving community education and communication, among other duties.

While the Trego Range Rider’s work is unlikely to extend as far west as the Yaak, the relocated bear could move toward Trego if he attempts a return to the Northern Continental Divide Ecosystem. And if his taste for bird seed and garbage remains, he could become one of the problem bears to which the Range Rider responds.

In other words, if his first attempt at life in the Yaak fails, the Range Rider initiative—and its allies at Vital Ground—may help offer the young bear a second chance.

And with the stakes as high as they are for the grizzlies of the Cabinet-Yaak Ecosystem, a second chance could make all the difference.