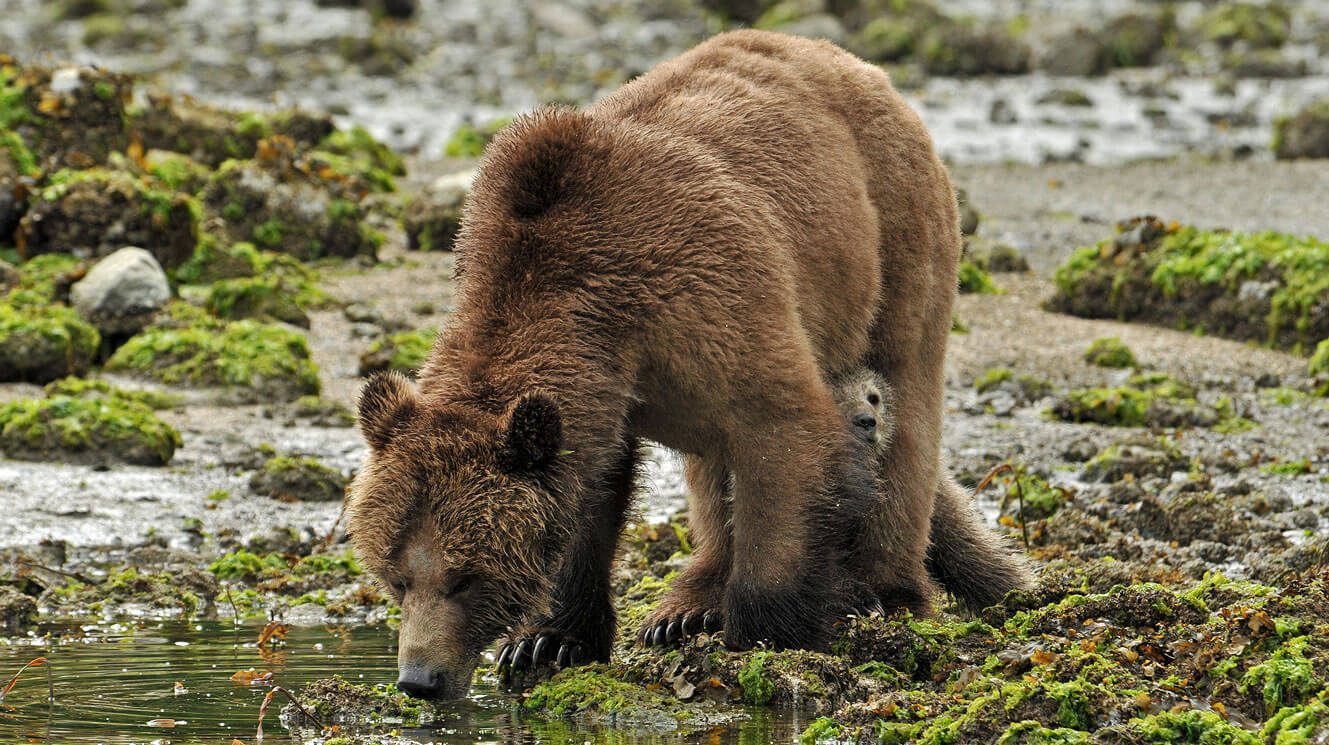 Photo: Robert Scriba
Along the coast of western Canada, brown bear mothers and their cubs face a struggle to survive in 2019, with low salmon runs creating stiff competition for food.

In early October, Alaska’s Katmai National Park held its annual “Fat Bear Week,” a delightful celebration of the park’s healthy brown bears. For these coastal grizzlies, the summer and early fall effort to pack on the pounds usually pays off. The bears can gain up to 400 pounds from salmon, berries, insects, and other foods!

With fat stores like that, a bear can comfortably doze through winter hibernation and come out healthy in the spring. It’s fun to celebrate the vigor Katmai’s bears, but right now it’s a different story for those farther down the Pacific Coast. In Western Canada, climate impacts and other factors have caused precipitously low salmon runs, leaving some grizzlies emaciated. With winter fast approaching, they’re in a scary situation.

Wildlife guide and photographer Rolf Hicker recently captured and published images of almost unrecognizably thin grizzly bears, bringing the issue to the forefront of the conservation world. The Mamalilikulla First Nation monitors grizzlies across its traditional coastal territory in central British Columbia, and has noticed the recent change as well. Chief councilor Richard Sumner told the Canadian Broadcasting Corporation (CBC) that bears have been traveling between islands far more often, likely in an attempt to find food. This movement can be energetically costly, and leading up to hibernation grizzlies need to conserve energy however they can.

Jake Smith, guardian watchman manager for the Mamalilikulla, echoed Sumner, telling CNN, “The bears are in trouble.” Scientists and those familiar with the area’s grizzlies agree that the trouble stems from unprecedented decreases in salmon populations.

The CBC reports that 2019 has seen some of the worst salmon runs in recorded history. The Fraser River entered summer with five million sockeye expected and instead saw just over 600,000. For the animals, plants, and people that depend on these salmon, this decrease may foreshadow a hard future.

Pacific salmon are a keystone species—impacting and supporting countless other animals and plants. Salmon provide nutrients for all parts of the forest, acting as fertilizer for riparian plants and a nutritious food source for many animals. One study found that up to 40 percent of streamside nitrogen, a key chemical element for plant growth, can be traced back to salmon. They’re absolutely crucial to the environmental health of Canada’s coastline, and further decreases in numbers could be devastating.

So what caused this population drop in the first place? A recent Canada Fisheries and Oceans report highlights marine heatwaves, warming ocean temperatures, increased river sediment loads from landslides and flooding, and forest fires as impacting the populations. They point out that the more time salmon spend in freshwater the harder they’re hit. This means coho, chinook, and sockeye salmon have had the largest drops, while some ocean species are more stable. Climate catalyzes many of these issues, with the report noting, “Canada’s climate warming has been double the global average, and warming at northern latitudes has been even greater.”

Biologist Alexandra Morton has spent decades studying the effects of open-net fish farming on wild Pacific salmon. She sees it as a crucial factor in the recent declines. Open-net farming means keeping salmon in pens in the open ocean rather than a dedicated facility on land, and there are concerns about wild salmon passing near these captive populations. A paper Morton coauthored in 2007 predicted the extinction of pink salmon in eight years due to sea lice transmitted from farmed fish. She explains that pressure from activists and First Nations led fish farms to use drugs that have delayed this extinction, but the impacts are now resurfacing.

Salmon are the lifeblood of Pacific Northwest, crucial not just to grizzly bears but to orcas, eagles, cedars and Doug firs—and of course humans. On her blog, Morton writes, “We are losing a part of this earth, an ecosystem that generously made clean air, clean water and clean food. We are losing a fish that feeds the trees that make the oxygen we breathe.”

Beyond those living in the Northwest, these concerns may hit home for Vital Ground supporters who have traveled one of our Wild Bear Tours to Knight Inlet Lodge in British Columbia. Bryan Collen, general manager of Knight Inlet, explained over the phone that while he’s concerned about this year’s low salmon run, he’s also seen plenty of healthy bears this fall.

“Females with cubs of the year are going to be more impacted, even in good salmon years,” Collen said, but he’s especially worried about large males dominating food resources this season. Collen hopes that increased federal funding and restoration projects in the area will help the salmon rebound and prevent the scarcity that occurred this year, but it remains a dicey situation.

Beyond the coast, the salmon crisis and its impacts on grizzlies offer a chilling example of how wildlife will struggle to adapt to environmental changes present and future. Within Vital Ground’s focus area of the northern Rocky Mountains, utilizing private-land conservation measures to connect dedicated habitat areas is crucial to providing grizzlies and other wildlife the room they’ll need to move and adjust to shifting food availability and other climate impacts.

Our conservation projects create homes and corridors for countless species of plants and animals—and they have impacts on the global climate as well. By preventing development in key habitat zones, we lower the carbon footprint, prevent erosion that harms stream ecosystems, and ultimately make space for wild creatures to be wild. And by restoring native plant species to these areas, we help store carbon that would otherwise contribute to warming. So while we may not be in a position to directly aid Canada’s coastal bears this fall, your support of habitat protection in the Northern Rockies makes both a tangible impact on the ground and a broader contribution to a resilient future for people and wildlife alike.

Learn How You Can Help Protect Grizzlies Today!