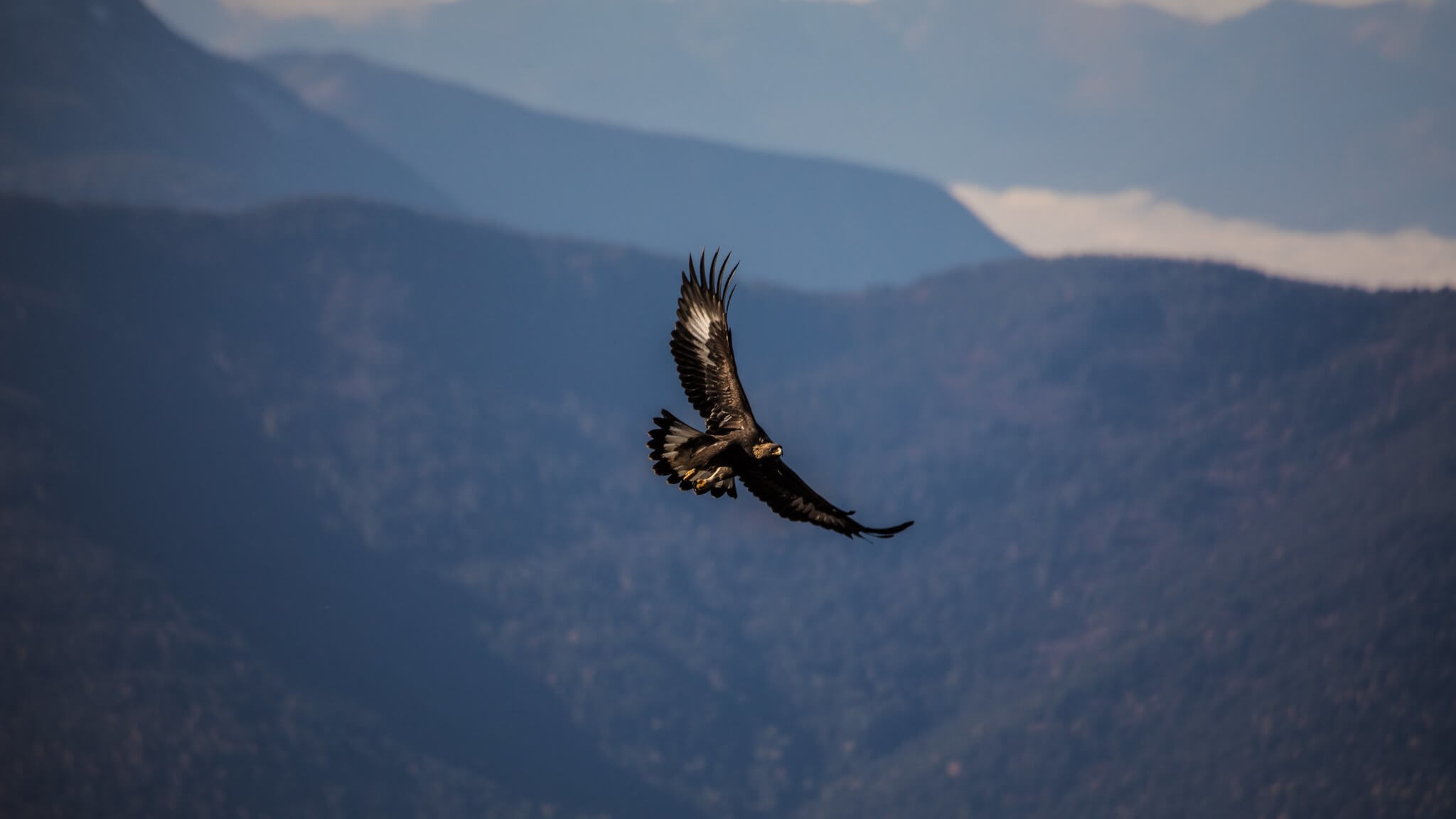 The sun rises over the Beaverhead Sage-steppe in southwestern Montana. Golden light shines down into a clearing, illuminating an enchanting scene that is becoming increasingly rare. It is dawn and the male Greater sage-grouse (Centrocercus urophasianus) is beginning his iconic courtship display. He gulps up to a gallon of air and holds it in a specialized pouch within his esophagus. Forcing it out, he inflates bulbous yellow sacs in his neck to make an unusual series of swishes, coos, pops and whistles that will attract mates. Over the course of a few hours each morning during the breeding season, he performs this display — up to 10 times per minute.

The Beaverhead area is also home to over 3 percent of the state’s Greater sage-grouse population and 29 breeding sites, known as leks. These birds need space: the Cornell Lab of Ornithology estimates that 75,000 acres of unfragmented sagebrush habitat is needed just to sustain the population of sage-grouses using a single lek. Due to their sizeable gatherings during breeding season and short-distance seasonal migrations, the species is incredibly sensitive to habitat fragmentation. The North American Breeding Bird Survey reports that their numbers have declined 83 percent since 1966 and they are listed as a Level I Priority Species of Concern by the Montana Audubon Society.

The Yellowstone to Yukon (Y2Y) region, stretching 2,100 miles along the Rocky Mountains, is a major migratory pathway that includes sections of the Central and Pacific flyways. The diverse mountain terrain that makes the region a vital stronghold for grizzlies also provides habitat for an estimated 275 breeding species, including many endangered and threatened birds like the Greater sage-grouse. Avian conservation studies of the Y2Y region have found that connectivity between habitat patches is associated with greater viability and dispersal of bird populations within protected areas. Vital Ground’s ongoing One Landscape Initiative aims to improve connectivity in the region by conserving private lands that bridge wild strongholds, including in the areas around Yellowstone National Park where remaining sage-grouse populations live.

From Glacial Peaks to Cold Waters

Head north through the vast blue skies of Montana and you will spot raptors like Golden eagles (Aquila chrysaetos) and Peregrine falcons (Falco peregrinus) soaring and diving between the jagged peaks of Glacier National Park. Both these birds of prey are also on the Montana Audubon Society’s list of Species of Concern due to habitat loss and environmental pollution. Glacier is located on a main migratory path of Golden eagles, with up to 2,000 individuals passing through the park annually in the late 1990s.

Along Glacier’s icy waterways, another species experiencing population declines is the Harlequin duck (Histrionicus histrionicus). Bearing plumage that evokes a modern art piece with its geometric markings of slate-blue, chestnut and white, this beautiful bird is increasingly threatened due to spring runoff changes related to rising average temperatures. Aquatic habitat loss outside the park also limits its range.

Montana is one of a few states where this stunning species can still be seen in the wild. Glacier National Park, near some of our conservation easements, is considered an Important Bird Area (IBA) by the Montana Audubon Society with 25 percent of Montana’s Harlequin duck chicks produced within the park’s boundaries. That means 75 percent are born outside the park, however, demonstrating that conserving habitat on the edges of protected public lands supports the continued genetic and local vitality of threatened species.

Moving away from the high mountains, along Montana’s prairies and intermountain valleys you may be surprised to find one of the state’s most impressive shorebirds. In fact, the largest shorebird in all of North America, the Long-billed curlew (Numenius americanus) occupies much of the state during its summer breeding season. Its Latin name Numenius means “of the new moon” and describes the slender curve of the birds’ astonishingly long and thin bill, which is used to probe the ground for aquatic invertebrates and grasshoppers.

Much of the curlew’s grassland habitat has been converted to other uses. In Canada, 75 percent of native grasslands have been destroyed and 90 percent of the curlew’s wintering habitat in coastal California has been lost, according to The Cornell Lab of Ornithology. Their local populations in Montana are relatively stable and represent a stronghold for this species that has been almost entirely extirpated from the eastern Great Plains. The Montana Audubon Society has an ongoing initiative that employs volunteer citizen-scientists to monitor these birds. They have identified the Mission Valley (just north of Vital Ground’s headquarters in Missoula) as a key area for curlew habitat conservation and encourage partnerships with local farmers to implement bird-friendly agricultural practices.

Vital Ground for Bears and Birds

Here at Vital Ground, our focus on the charismatic grizzly is influenced by its role as an umbrella species. Similar to many migrating bird species, grizzlies need both cores of protected habitat and corridors that connect them. Bears play a key role in dispersing seeds and tiling the soil, allowing plants like huckleberries (a native to Montana and food source for both mammals and birds) to spread. This is one reason why stable grizzly populations are good indicators of the overall health of an ecosystem.

A recent GIS analysis by Vital Ground student intern Jasmin Lopez indicates a significant overlap in the location of the Audubon Society’s Important Bird Areas and grizzly habitat areas prioritized by our One Landscape Initiative. Using input from over 60 biologists and wildlife managers, we identified Habitat and Conflict Inventory and Prioritization (HCIP) areas for grizzlies and planned our One Landscape strategy around them. In just the western portion of Montana, there were at least 34 overlap sites considered both HCIP areas and IBAs, including sites in the Yellowstone and Bitterroot ecosystems and near Glacier National Park.

Thanks to the support of conservation contributors like you, Vital Ground’s One Landscape Initiative serves both the state’s threatened grizzly and avian populations. From Harlequin ducks in glacial streams to Greater sage-grouse on the high steppe, your passion for protecting and connecting crucial habitat benefits all biodiversity. We thank you!

Learn more about the grizzly as an umbrella species…