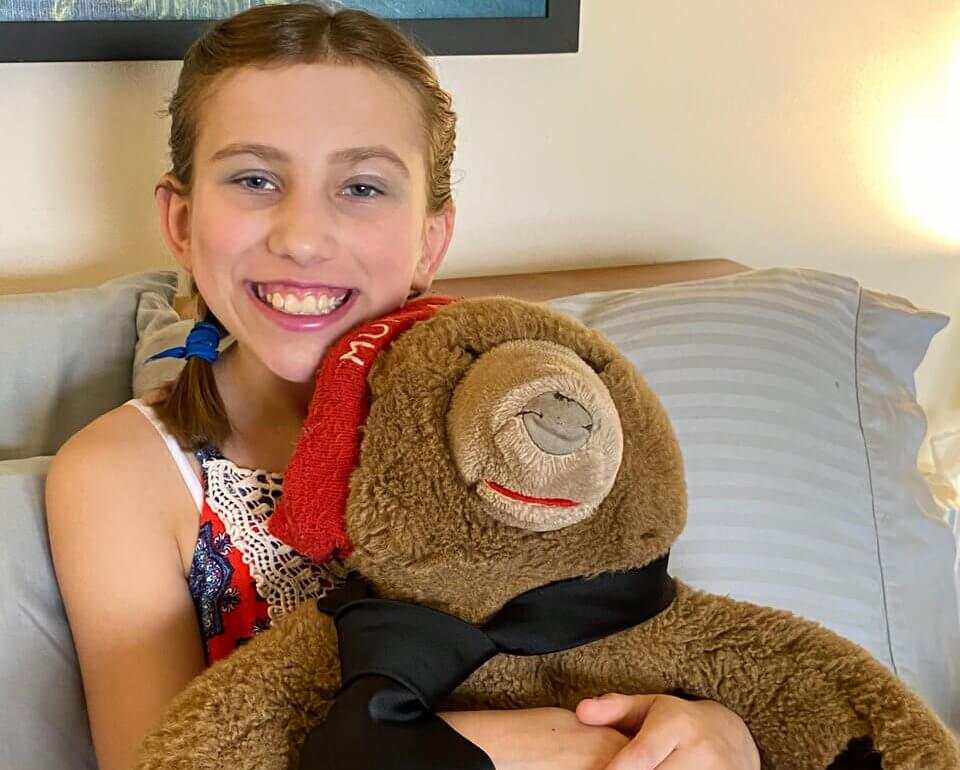 Kloe, a young Vital Ground supporter, and Murray, the stuffed bear who inspired Kloe to turn her 10th birthday into a fundraiser for habitat conservation.

A little while back, Vital Ground got to solve a nonprofit’s favorite kind of mystery. We had started noticing donations pouring in on behalf of someone named Kloe. We were intrigued and a little follow-up uncovered a great story.

The donations, it turns out, were the result of a young Vital Ground supporter’s request that her family and friends support grizzly bear conservation for her 10th birthday! I caught up with Kloe and her stepmom Anna through video chat to learn more about Kloe’s fundraiser and her interest in helping grizzly bears.

Kloe told me that her interest in grizzly bears began with Murray, a big, fluffy, well-loved teddy bear that her dad gave her a few years ago. Since then she’s added another grizzly to her collection and they’ve become her favorite animal.

“I really like Murray so I wanted to help the grizzly bears,” Kloe said. She also said that Murray loves to play fight with her grandpa’s black bear stuffy who’s named Teddy.

After a classmate started a fundraiser to help Australian wildlife impacted by last year’s bushfires, Kloe realized she might be able to help wildlife as well. Kloe learned about grizzly bears’ need for protected and connected habitat as they face the challenges of ongoing habitat encroachment and climate change. When her 10th birthday came around she decided she wanted to help grizzlies in particular.

For her birthday, Kloe had a sleepover with some friends and asked them for donations to Vital Ground in lieu of gifts. Anna and Kloe also sent info and a link to donate to guests’ family members. Thanks to Kloe’s generosity, we received many donations that will help protect vital land for grizzly bears and other wildlife.

Kloe says she’s concerned by climate change and would like to learn more about it. She’s an avid reader and budding scientist. “I like to read books,” Kloe said, “and now because of homeschool Anna reads me an element of the day and I’m really interested in the elements.”

Anna added that homeschooling during the coronavirus quarantine period is allowing them to spend a little more time learning about science. “She’s learning a lot more about the environment,” Anna said. “We can go outside and plant a vegetable garden or look at science books.”

When she’s not helping grizzly bears or following her scientific curiosity, Kloe loves to ride bikes, swim, play Minecraft, and play with Murray. She said she’d love to be a writer when she grows up.

We’re so inspired by Kloe and grateful for her fundraiser and support of grizzly bears. However large or small, every donation and fundraiser goes a long way toward helping preserve wildlife habitat and healthy grizzly populations for years to come!