YAAK, Mont. – Nestled amid the Purcell Mountains of far northwestern Montana, the Yaak Valley’s diverse wildlife and limited development make it one of the wildest places in the lower 48 states that does not fall within a national park or federal wilderness area. The Yaak’s biodiversity and wild character gained new durability this week as The Vital Ground Foundation and conservation-minded landowners completed the addition of 160 key acres to Vital Ground’s Fowler Creek habitat protection project.

“We couldn’t be happier that Vital Ground will be taking on our property and managing it in perpetuity as habitat,” say the former landowners, who wish to remain anonymous. “In ecological terms the pieces are all there, including an extensive beaver marsh, a number of upland wetlands, and at least a dozen species of conifers. We find ample evidence of bears in the form of debarked trees, and wolf scat is common.” 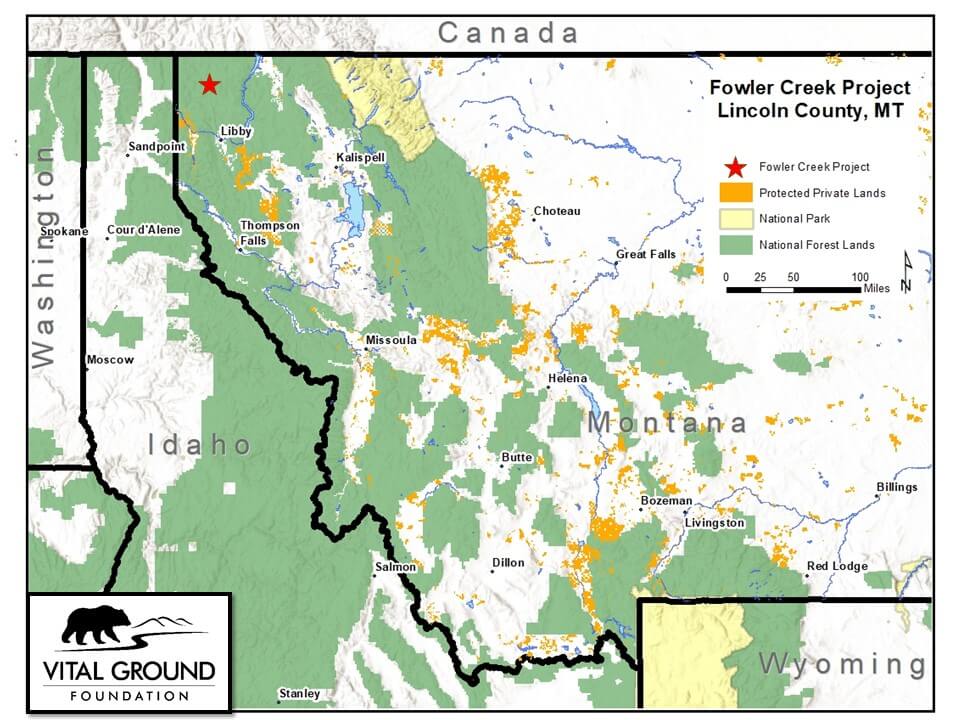 Located directly north of the 315-acre Fowler Creek area that Vital Ground acquired earlier this year in partnership with the Humane Society Wildlife Land Trust, the additional acres will remain undeveloped as open space and wildlife habitat. Under Vital Ground ownership, the area’s stewardship can now be streamlined to best maintain connectivity for wildlife crossing the valley bottom.

By protecting wetlands and preventing subdivision, the project also maintains the Yaak’s water quality and its enduring rural character. With other parts of northwestern Montana experiencing unprecedented spikes in their real estate markets, ensuring a conservation outcome for the Fowler Creek marshlands will benefit wildlife and people for generations to come.

“It’s been amazing to watch the real estate market in places like the Yaak over the last 18 months,” says Mitch Doherty, conservation director for Vital Ground. “If we want to continue to have rugged, off-the-grid places like Yaak, places that still have character, we need to work harder than ever to keep them that way. It’s the passion, commitment and generosity of landowners like these ones on Fowler Creek that make a difference for people and wildlife in the Yaak Valley.”

For the Yaak’s grizzly bears—a subpopulation that biologists estimate at just 20-25 animals—maintaining an open, connected landscape is a matter of survival. The population’s long-term future depends on increasing its genetic diversity through breeding with bears from elsewhere. With a recent uptick in grizzly movement between the Yaak and the neighboring Selkirk and Cabinet mountains, conservation of habitat linkages like Fowler Creek allows bears to move safely across the larger regional landscape and slowly reconnect their fragmented range.

“We have a native species on the landscape that we have reduced to exceedingly low population levels,” says Wayne Kasworm, a U.S. Fish and Wildlife Service biologist who has led grizzly recovery in the Cabinet-Yaak and neighboring Selkirk Ecosystem since 1983. “The Selkirk and Cabinet-Yaak areas are largely multiple-use environments. We don’t have either of these areas anchored by a large national park or large expanses of wilderness, but bears need secure habitat that provides opportunities to move across the landscape without bumping into too many people along the way.”

Beyond grizzlies, Fowler Creek provides range to bull trout and Canada lynx, species listed as threatened by the U.S. Fish and Wildlife Service, as well as numerous other native fish and the region’s full suite of fauna, from wolves and wolverine to badgers, foxes, moose, black bears and mountain lions.

Linking the Northern Rockies’ biodiversity strongholds while protecting open space and rural character from the Canadian border through northern Idaho and western Montana to the Greater Yellowstone area is the goal of Vital Ground’s One Landscape conservation strategy. Additional support for the Fowler Creek addition came from private contributors and the Teton Ridge Foundation.