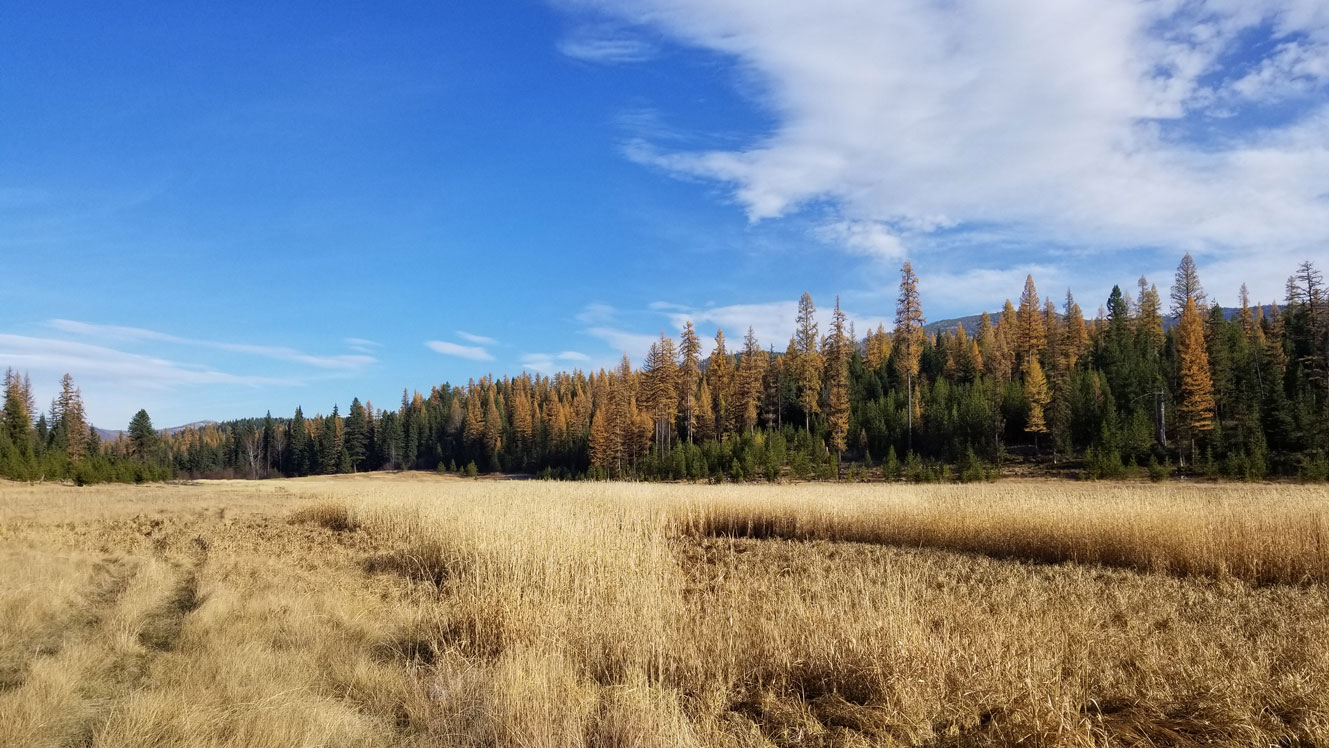 Photo: Mitch Doherty
Deep in the Yaak Valley of Montana’s northwestern corner, Vital Ground and the Humane Society Wildlife Land Trust conserved 315 acres of rich, diverse habitat along Fowler Creek. An important movement area for grizzlies, elk, native fish and much more, the land will be protected from increased development pressures in the region.

MISSOULA, Mont. – One of the most remote places in the Lower 48 states will sustain its rural character and important wildlife habitat thanks to the Vital Ground Foundation’s 315-acre land purchase in northwestern Montana’s Yaak Valley this week. With major support from the Humane Society Wildlife Land Trust (HSWLT), the project conserves diverse habitat along Fowler Creek, a tributary of the Yaak River and well-traveled pathway for elk, moose, grizzly bears, native fish and many other species.

“Protecting crucial habitat and connectivity for grizzlies and other far-ranging wildlife is increasingly urgent,” says Jim Reed, Executive Director of HSWLT. “The Humane Society Wildlife Land Trust is proud to help Vital Ground secure another substantial expanse of key habitat in Montana’s Yaak Valley as a safe haven where grizzlies and wildlife will forever benefit from humane stewardship. “

Along with the Cabinet Mountains to the south, the Yaak Valley and surrounding Purcell Mountains make up the smallest of the U.S. Fish and Wildlife Service’s six designated grizzly bear recovery zones. The Cabinet-Yaak Ecosystem includes an estimated 25-30 grizzlies in the Yaak and a similar number in the Cabinets. There is little documented movement between the two groups and federal recovery goals call for roughly doubling the population size of each before they can be considered safe from extinction.

If the Cabinet and Yaak grizzly populations lose core habitat there’s little chance at improving connectivity between them. Fowler Creek is just that kind of habitat—within documented grizzly range, but both scenic and accessible enough to carry a high risk of development. Had these 315 acres been subdivided and developed for residential or other uses, the increased human presence would have posed a significant roadblock and conflict risk to grizzlies and other wide-ranging animals while simultaneously damaging water quality and fish habitat in the Yaak watershed.

For a grizzly population as small as the Yaak’s, where only a handful of females are of reproductive age at the same time, any new risk of conflict with people means a risk to the entire population. Lying along a stream corridor that helps connect the ecosystem’s rugged mountains, the Fowler Creek project provides a crucial piece in the Yaak’s conservation tapestry.

“We have a native species on the landscape that we have reduced to exceedingly low population levels,” says Wayne Kasworm, a U.S. Fish and Wildlife Service biologist who has led grizzly recovery in the Cabinet-Yaak and neighboring Selkirk Ecosystem since 1983. “The Selkirk and Cabinet-Yaak areas are largely multiple-use environments. We don’t have either of these areas anchored by a large national park or large expanses of wilderness, but bears need secure habitat that provides opportunities to move across the landscape without bumping into too many people along the way.”

The Path to One Connected Landscape

From the Yaak to central Montana’s Rocky Mountain Front Range, places like Fowler Creek represent the crux of Vital Ground’s One Landscape Initiative, an effort to connect a single, regional landscape in the Northern Rockies and Inland Northwest. With clean water, lush vegetation and easy travel beneath big mountains, these special areas attract both bears and humans for good reason.

But with Montana’s housing market currently ranked second nationally for growth, it’s vital for wildlife that the region’s remaining rural valleys find a balance between open space and new development pressures. One Landscape is Vital Ground’s urgent push to conserve habitat connections across 188,000 identified acres in these threatened areas, protecting their rural character and a resilient future for wildlife.

“Real estate markets throughout the Northern Rockies have never been under the kind of pressure they’re experiencing right now,” says Ryan Lutey, Vital Ground’s executive director. “You can bet that every acre of developable private land that is not already permanently protected for agriculture, open space or wildlife habitat is currently subject to some analysis of its highest and best use. That makes it extremely hard to compete against the speculative development pricing we’re seeing, but simultaneously increases the importance of every acre protected. With partners like the Humane Society Wildlife Land Trust and projects like Fowler Creek, we continue to do our best to match pace with these challenges.”