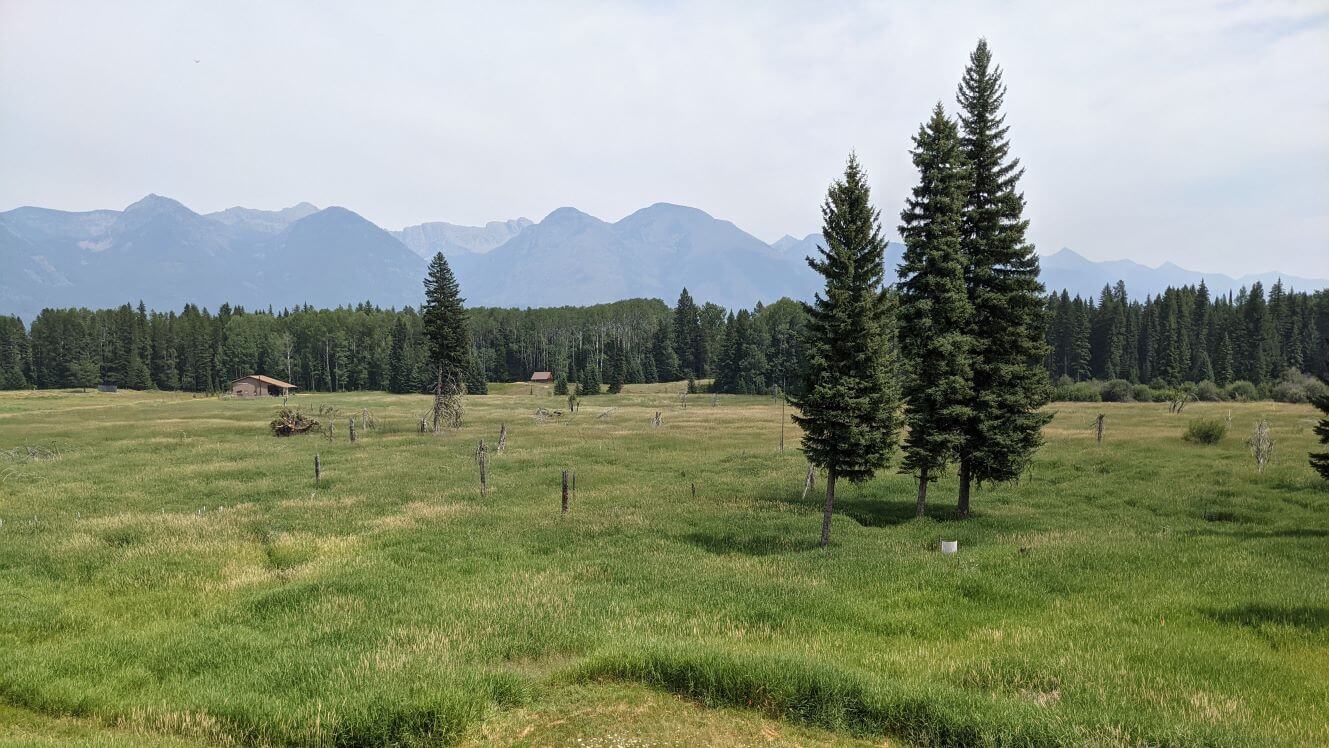 The Swan Mountains rise to the east of newly-conserved land in the Salmon Prairie area of Montana's Swan Valley where Vital Ground and landowners completed a voluntary conservation easement recently, protecting key forested wetlands in a habitat corridor for grizzly bears and many other wildlife species.

MISSOULA, Mont. — A sizeable wetland within a key wildlife corridor will remain open and protected for grizzly bears and many other wildlife species in Montana’s Swan Valley after the Vital Ground Foundation completed a conservation agreement in the Salmon Prairie area near Condon this week.

Working with conservation-minded landowners, Vital Ground collaborated with Montana Freshwater Partners in support of the 30-acre conservation easement. The land will remain in private ownership with a new habitat restoration plan for portions of the wetland previously converted for agriculture. With the property bordering public lands and other protected private lands, the project ensures that rich forested wetland habitat will remain undeveloped within the wildlife movement area connecting the Mission and Swan mountains.

“We are thrilled to partner with Vital Ground and the landowners to protect this unique property,” said Leah Swartz, project manager for Montana Freshwater Partners. “Forested wetlands can take hundreds of years to develop on the landscape, so protecting those that remain intact is a priority.”

Located roughly five miles from another Vital Ground conservation easement along Condon Creek, the Salmon Prairie project adds to the Swan Valley’s impressive network of protected private lands that link wildland strongholds on either side of the valley. What makes the Salmon Prairie property unique are the rich wetlands that cover the majority of the acreage.

Grizzly bears rely on the Swan Valley’s moist bottomlands for seasonal range, with spring plant foods present earlier than at higher elevations. The lush habitat also draws moose, elk and deer and lies within the documented range of rarer species including wolverine and Canada lynx. As part of the Swan River watershed, the Salmon Prairie wetlands maintain water quantity and quality in a key habitat area for native bull trout, a federally-designated threatened species, and Westslope cutthroat trout, a designated sensitive species in Montana.

“The landowners’ game cameras have captured just about every species you could imagine using their property, from great gray owls to mountain lions and grizzly bears,” said Swartz.

Under the new easement, the acreage will be protected in perpetuity from development outside of a small corner where the landowners live. Working with Montana Freshwater Partners, the landowners will undertake habitat restoration efforts to improve species diversity, natural water storage and wildlife habitat in parts of the property once converted for agriculture.

Located within the Northern Continental Divide Ecosystem—home to the Lower 48’s largest grizzly bear population at roughly 1,100 animals—the Swan Valley has a long tradition of protecting and stewarding private lands that link the region’s wild expanses. As development pressures build across Montana, voluntary conservation partnerships with landowners are crucial to balancing the needs of wildlife and people.

“The Swan Valley is a conservation success story,” said Mitch Doherty, conservation director for Vital Ground. “Projects like this show how landowners are voluntarily protecting biodiversity for generations to come. The culmination of their conservation efforts, large and small, are how we protect this jewel in the southwestern portion of the Crown of the Continent region.”

With more than a dozen projects completed in the Swan over the last 20 years, Vital Ground continues to play a major role in the valley’s conservation future while also working in areas farther from the grizzly’s core range to reconnect the species’ historic range. Building off the Swan Valley’s model for private land conservation, Vital Ground’s One Landscape Initiative envisions a safer shared landscape for wildlife and people across the Northern Rockies.