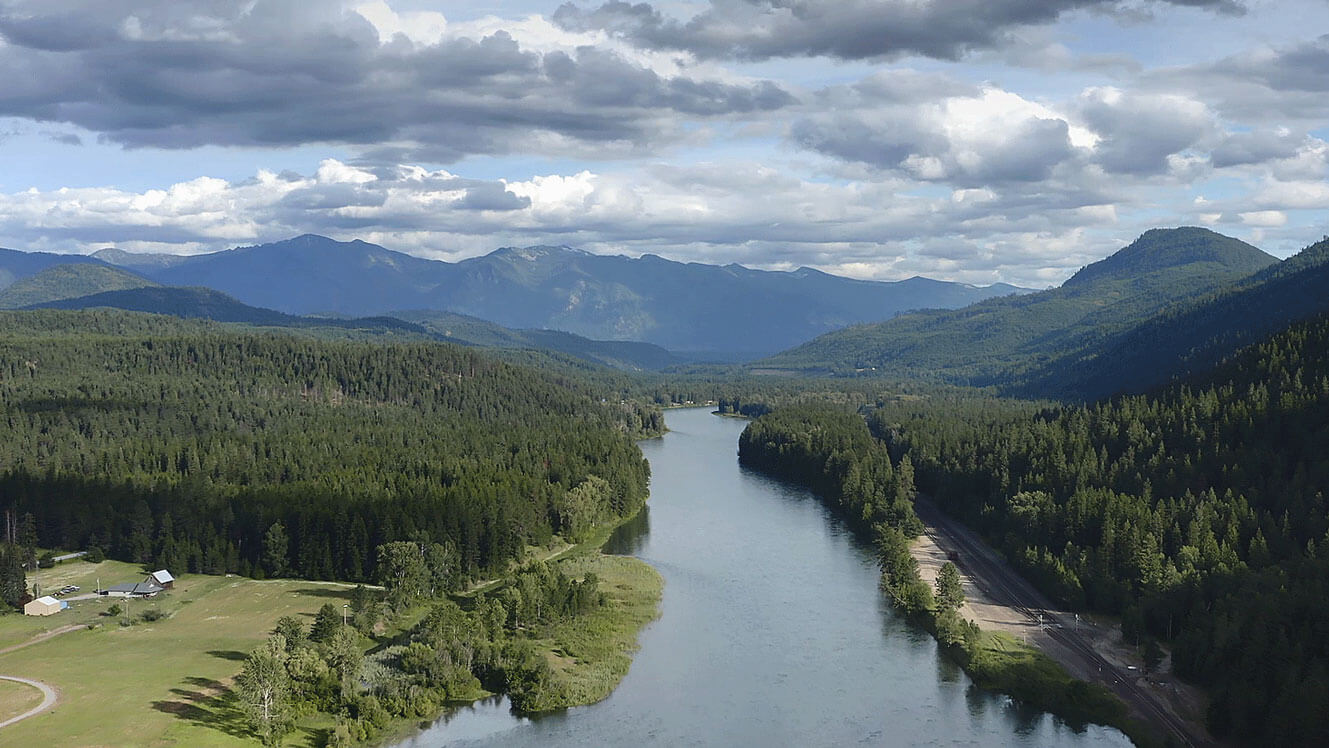 Photo: Eric Ian
With this week's land purchase, Vital Ground and the Yellowstone to Yukon Conservation Initiative have now conserved more than 125 acres in the Wild River corridor along Montana's Kootenai River. Once slated for dense subdivision development, the project site (bottom left) provides a habitat link between the Cabinet and Purcell mountains.

MISSOULA, Mont. – The Vital Ground Foundation and Yellowstone to Yukon Conservation Initiative (Y2Y) purchased new land Friday in a northwestern Montana subdivision where the groups have been working with willing landowners to conserve a crucial wildlife corridor for several years.

The organizations’ collaborative Wild River Project now covers more than 125 contiguous acres along the Kootenai River near the town of Troy. Located near the confluence of the Yaak and Kootenai rivers, the site represents a natural bottleneck for wildlife moving across the valley. The Kootenai River splits the Cabinet and Purcell mountain ranges, each of which is home to a small population of grizzly bears as well as Canada lynx, wolverine and other sensitive species.

“This is a big deal because it helps bolster the recovery of grizzly bears in Northwest Montana,” says Jessie Grossman, program coordinator for Y2Y. “It provides a stepping stone for them to reconnect with neighboring populations, which is critical for their long-term survival. Biologists believe this project helps reconnect fragmented grizzly populations between the Yellowstone area and the Canadian border, so this matters for grizzly bear health on an international scale.”

This week’s land acquisition covers an additional lot adjacent to other subdivided parcels purchased by the groups between 2017 and 2019. The acreage will fold into ongoing habitat restoration work to remove remaining residential wildlife attractants from the area and return the land to native plant cover.

Wildlife biologists from multiple jurisdictions have long pinpointed the Wild River area as a crucial habitat connection. The Kootenai Valley bisects the U.S. Fish and Wildlife Service’s designated Cabinet-Yaak Grizzly Bear Recovery Zone, splitting the ecosystem’s bears into two largely-isolated subgroups estimated at just 25-30 grizzlies each. By protecting habitat along the valley floor, the Wild River Project advances the long-term goal of reconnecting these grizzlies, which are threatened by continued habitat fragmentation and ongoing encroachment into the remaining wild landscapes they inhabit.

“It gives the opportunity for a linkage from the Yaak to the Cabinets,” says Wayne Kasworm, a USFWS biologist who has been working on grizzly recovery in the Cabinet-Yaak since 1983. “Not only did we identify that this was an area where we’d expect grizzlies to cross because of the habitat, but we have actually identified one grizzly bear that crossed on the perimeter of this property getting from the Cabinets to the Yaak.”

Numerous other species will benefit from the conservation efforts, from moose and elk to the Kootenai River’s native fish. The project area includes river frontage along a stretch of the Kootenai designated as critical habitat for the federally endangered white sturgeon and threatened bull trout. Vital Ground is partnering with Montana Fish, Wildlife & Parks to improve spawning habitat for sturgeon in and along the river. In total, biologists have documented more than 30 national species of concern within a few miles of the Wild River area.

“Locals know this spot as important wintering grounds for elk,” says Grossman. “It’s not only a benefit to endangered species, but also to a variety of wildlife valued by Montanans for activities like hunting that sustain our rural way of life.”

By linking state and federal forestlands on either side of the river, the Wild River Project carries a conservation impact far greater than the sum of its acreage. The effort advances Vital Ground and Y2Y’s broader efforts to connect wildlife habitat by working with landowners to conserve private lands in key movement areas.

Y2Y has protected habitat throughout the transboundary Cabinet-Purcell region, an essential puzzle piece in its vision of a connected landscape stretching from Canada’s Yukon to the Greater Yellowstone area. Meanwhile, Wild River represents an important cog in Vital Ground’s One Landscape Initiative that aims to protect nearly 200,000 acres on crucial private lands linking wild strongholds from Wyoming to the Canadian border.

“We’re humbled by the continued support we have to improve this area for wildlife and people,” says Mitch Doherty, conservation manager for Vital Ground. “The most recent acquisition at Wild River not only protects additional land within the wildlife corridor, it also pairs well with the restoration efforts already underway. We’re excited to continue our collaborative work in this wildlife connectivity area.”