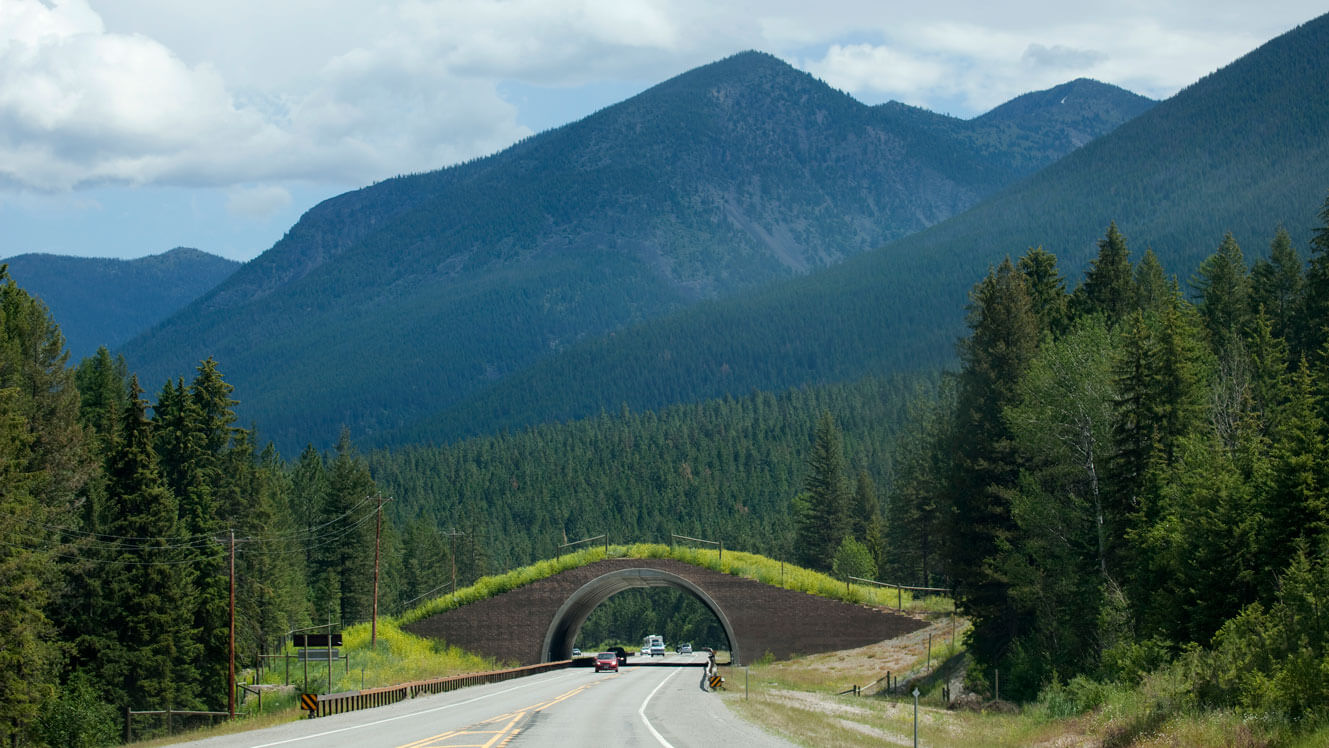 The Animals' Trail wildlife overpass is a 197-foot crossing structure on the Flathead Reservation managed by the Confederated Salish and Kootenai Tribes. A new federal funding program could spur additional crossing structure projects that increase wildlife connectivity in Montana and beyond.

A grizzly bear dubbed “Lingenpolter” by local biologists caught the attention of many in Montana and elsewhere last year. Using a GPS tracker, biologists watched as the young male bear repeatedly attempted and failed to cross Interstate 90. They followed Lingenpolter’s movements in an area between Missoula and Butte, watching as he traveled for miles alongside the interstate and tried to cross it an estimated 46 times from fall of 2020 to spring of 2021.

Lingenpolter’s story illustrates an issue facing many animals in Montana and beyond: highways, interstates and other major roadways fragment habitats, causing isolation as well as vehicle collisions that are often fatal.

Last November, the federal government passed The Infrastructure Investment and Jobs Act which included The Wildlife Crossings Pilot Program. This initiative will devote $350 million dollars in grants over five years to help make major roadways easier to cross for wildlife. For the people working to create these connections in Montana—and the wildlife that would benefit—this money could make a big difference in the coming years.

Wildlife collisions are a problem across the entire country, but that doesn’t mean that addressing the issue is futile. In Montana, the People’s Way Partnership offers evidence of successful interventions.

In 2000, the Confederated Salish and Kootenai Tribes met with the Montana Department of Transportation and the Federal Highway Administration to establish a tri-governmental approach to addressing wildlife collisions along U.S. Highway 93.

“From that process came a radical idea: Instead of focusing on how the road will impact the land, focus on how the land should shape the road,” reads the People’s Way Partnership website. “The team called this approach a ‘Spirit of Place.’”

Highway 93 runs north-south through western Montana and the Flathead Reservation, where the CSKT manages wildlife. And since the advent of the Partnership, the highway has seen the addition of numerous wildlife accommodations. If you’ve driven along Highway 93 north of Missoula, you’ve definitely seen the 197-foot “Animals’ Trail” outside of Arlee. This vegetated overpass allows wildlife to cross the highway without issue. But not every wildlife crossing intervention is a large overpass, with underpasses and culverts also effective. Along Highway 93 you’ll find 41 total fish and wildlife crossings, 60 jump-outs (installations that help trapped animals escape fenced roadways) and 18 miles of wildlife fencing, with more projects underway.

The new federal funding could help even more.

“These funds may be helpful in paying for the cost of installing adequate and effective crossing structures that would facilitate grizzly bear and other wildlife movement across the landscape,” said Kari Eneas, Tribal Wildlife Program Manager for the CSKT.

And they work. Intensive monitoring has determined that these crossings, without a doubt, save the lives of animals and increase habitat connectivity.

“These small steps to reconnect the natural environment give me hope of coexistence with wildlife,” Eneas said.

The Cost of Connectivity

If we know that these interventions work, why don’t we build them everywhere? A big part of the answer is cost. To secure financial backing to build an overpass, for example, it has to be clear that the project will make a long-term difference in that particular area. In other words, the two habitats that the crossing connects have to be designated wildlife areas, or at least not spaces that could be developed in the coming years.

“That’s really where Vital Ground comes into play, and other land trusts as well,” said Vital Ground Conservation Director Mitch Doherty. “The work we do on the conservation side lays the groundwork for some of these larger transportation projects down the road, knowing that the habitat is secure on both sides.”

Doherty is part of the Missoula Regional Connectivity Working Group, which aims to help identify potential wildlife accommodations for some of the major roads in western Montana.

Because cost is such an issue, Doherty says the working group is currently focused on the “low-hanging fruit”—in other words, identifying wildlife accommodations that can make a difference without being a huge financial undertaking, like signs or fencing.

While Montana’s next major overpass may still be a ways off, the federal money could quickly spur along some of these smaller-scale projects, says Doherty. The Missoula Regional Connectivity Working Group hopes that identifying feasible projects will help some of this funding go to use in Montana.

“Our goal is to help the state be prepared and ready to grab some of that money and put it to work on the ground,” Doherty said.

Across the state in Paradise Valley, Yellowstone Safe Passages is also working to address this issue by focusing on a 55-mile stretch of U.S. Highway 89, from Livingston to Gardiner.

Daniel Anderson—whose family has ranched in the Tom Miner Basin outside Yellowstone National Park for decades—is a Liaison for the group. He aims to facilitate conversations within the local community. His priority has been, before constructing wildlife crossings, to “build bridges within the community first.”

The new federal funding could add momentum to the conversation and get the ball rolling on new projects. But to successfully intervene on behalf of wildlife, cohesion within the human community is important, says Anderson.

Many community members that Anderson talks to share concerns regarding the effectiveness of wildlife infrastructure and where funding will come from. To avoid potential divisiveness or conflict, Anderson works to engage the community on all levels, so that everyone knows they have a seat at the table.

“If we can place more time at the beginning to ask questions, listen and learn … it shows that we’re not focused on pushing an agenda,” Anderson said. “We’re focused on building conversations that are healthy and mature.”

With the safety of people and the wellbeing of wildlife impossible to separate, Vital Ground knows that collaboration within and between communities is essential to increasing habitat connectivity across roadways and ecosystems. By supporting our mission, you help to protect wildlife as they travel through the landscape—across Montana and beyond.