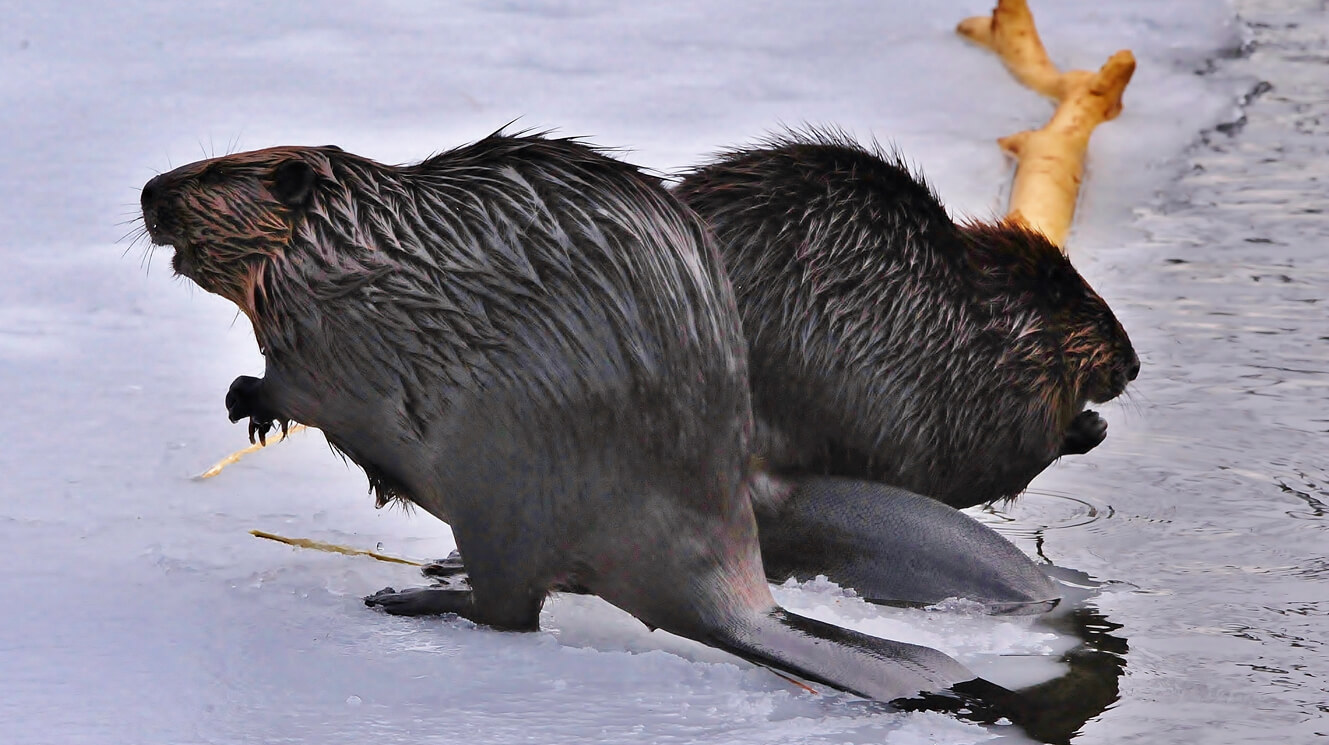 Photo: Paul Lueders
When winter arrives and ponds freeze over, beavers retreat to their lodges and rely on cached wood for food.

Beavers can chop down massive trees and build incredible structures, with the world’s largest beaver dam measuring 850 meters long. They aid water storage during droughts, prevent erosion, and create higher water quality in areas where they’re present. As journalist Ben Goldfarb explores in his new book Eager, they have shaped an entire continent’s ecosystems around their existence.

Beavers have also been found to positively impact bird and insect diversity as well as trout and salmon populations. They’re now frequently introduced to degraded streams as a natural and cost-effective restoration method. And in case you need more evidence that beavers totally rock, in sixth grade I wrote an animal report on a beaver species that lived during the Ice Age and grew to the size of black bears. I also had my first kiss in front of a beaver lodge. Okay, so I might be a little biased, but beavers also might just be the coolest animals ever.

I could go on for days, but in the spirit of this winter wildlife blog series, I’ll focus on their fascinating adaptions to the cold temperatures and freezing conditions winter brings. Check out the first post of the series, on insects’ adaptions to the winter, here.

Winter in a Beaver Lodge

Much like grizzly bears, beavers make a cozy retreat for the winter months. But unlike bears, beavers stay active and awake in their lodges throughout the entire season. Sturdily built of logs, rocks, grass, and mud, beaver lodges can stay standing and in use for many years.

Depending on their location and relative seasonal temperatures, the impending freeze of a beaver’s aquatic habitat triggers retreat to the lodge until the weather warms up in spring.

“I always like to emphasize how extreme it is to be awake and alert but in total darkness, with no option to escape when the water freezes over,” says Rob Rich, the Conservation & Education Associate with our partners at Swan Valley Connections, and the founding coordinator of the Whatcom Beaver Partners in Washington state.

Rob also highlights the lodge’s incredible construction, sealed with insulating mud and chinked with small holes left for air to come in and out. Additionally, the lodge is practically impervious to predators like wolves and mountain lions because of the hardened mud and water surrounding all entrances.

Biding their time in the darkness of the lodge, beavers do a crazy thing: they decouple their internal clock from the 24-hour day. Researchers have found that female beavers operate on a 26-28 hour day, believed to be closer tied to their estrous cycle.

Beavers aren’t always the only ones that make use of their lodge. Muskrats have been observed to spend the winter in beaver lodges. Researchers expect that they’re tolerated due to the extra body heat they provide.

Staying Nourished in the Cold

Staying awake all winter means that beavers need to eat. In the summer, beavers eat a lot more aquatic grasses and forbs than we often notice, and they also gnaw wood for its cambium, the sugary layer of living cells just below the bark. When their herbaceous food withers away, stored wood becomes the staple.

During the fall, beavers build up a cache or raft of wood underwater to provide nutrition when they’re stuck under the ice. This is one of many benefits building a dam provides. The dam creates a pond that’s well suited to beavers’ semi-aquatic lifestyle. It provides an area free from terrestrial predators, opening up new feeding areas without requiring its residents to spend time on land. When it comes to winter activity, it allows for a deep, calm spot for beavers to store their winter provisions.

Interestingly enough, beavers can be picky eaters and seem to prefer certain kinds of trees for their cache as they begin to construct it. As winter approaches they get less picky, adding whatever is readily available. Researchers hypothesize that certain kinds of wood may have compounds that help it stay preserved in water and influence beavers’ choice to cache it or leave it behind.

A beaver’s tail is also an important part of surviving the winter. Throughout the summer and fall it bulks up with fat that’s depleted during the winter. Adults can also drop their metabolic level to conserve energy. Their kits, on the other hand, are still growing and aren’t able to do this. They still need lots of food that the adults help provide. Sadly, winters are tough on young beavers, and lead to a high mortality rate during this period for kits and newly dispersing sub-adults.

On our Bismark Meadows property in Idaho’s northwestern corner, we’re hoping to restore beavers to a wetland area where they once flourished. Beavers are a hugely important animal in North America, acting as a keystone species by creating crucial wetland habitat. Unfortunately, it isn’t as simple as dropping beavers back onto a landscape in need of restoration. They need an area with some basic wetlands and nutritious plants available before taking over. To promote that we’ve installed beaver dam analogues on the property as a first step to reintroduction, as land steward Kali Becher explained recently in a blog post.

For grizzlies to thrive their ecosystem needs to thrive, and beavers are a crucial part of restoring many North American ecosystems. Connected, healthy habitat benefits all wildlife, and Vital Ground is dedicated to protecting it.