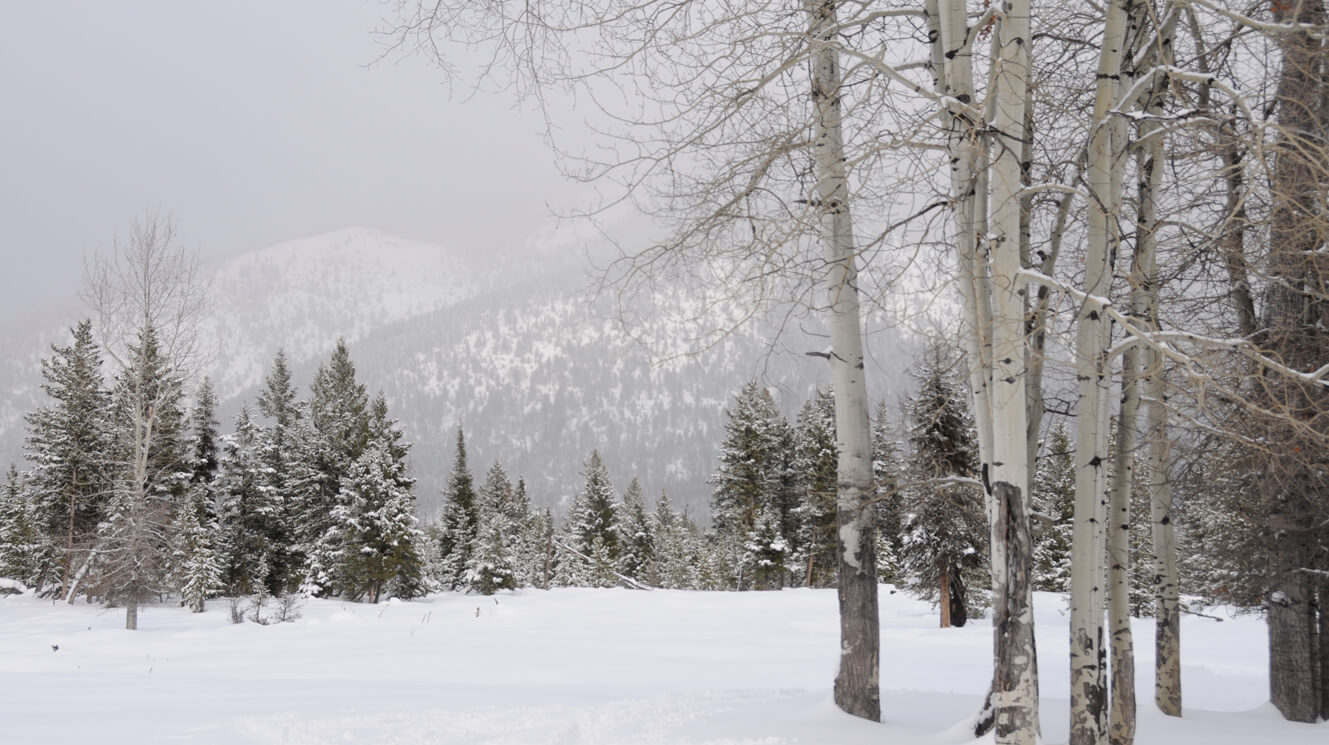 Photo: Lance Schelvan
When winter sets in and grizzly bears enter their dens, other wildlife remain active on the landscape, including many species of hardy, cold-adapted insects.

While Grizzly Bears Slumber, What’s Everyone Else Up To?

Hiking up a snowed-out road recently, I was accompanied by soaring Doug firs and red cedars, the peaks of the Cascade Mountains in the distance. Closer by was my family, including our two dogs. Rosy, our energetic golden retriever, was eagerly covering double our distance running back and forth. Bending down for a branch to throw for her, I noticed a tiny black dot moving across the snow.

Upon closer inspection, I noticed a round dark body, eight long legs, and two distinct pincers. It was a spider, steadily making its way across a few feet of snow. I was shocked to see it, and it made me curious about the winter goings-on of an often overlooked category of wildlife: insects and arthropods.

While grizzly bears are hibernating, there’s a whole world of life out there that thrives in amazing ways despite the harsh conditions that bears would rather sleep through. In this blog series, I’ll be exploring what’s going on in grizzly country while the bears are tucked away in their dens for the winter.

Adapting to the Cold

Unlike mammals or birds, insects are cold-blooded, meaning they can’t generate their own heat. Our bodies like to stay at a steady 98.6°F, but insects and other cold-blooded animals have their body temperature change more dramatically with their environment. Because of this, it might seem impossible for insects to tough it out for a whole winter—yet they can be found in the mountains all year long.

In response to winter challenges, insects have developed incredible methods of staying alive despite freezing cold temperatures. Many produce their own internal “anti-freeze” such as sugars, glycerol, or alcohol that prevent their body fluids from freezing. This has evolved at least six separate times in insects!

This doesn’t necessarily mean that they’re up for their normal level of activity. Stoneflies, for example, are too cold for their wings to work and have to stay on the ground. A flightless fly would typically make for an easy target for predators, however they too are much less active in the winter so the flies are in less danger. (Maybe in the winter we should call them “stonecrawls” instead?)

Another method to avoid freezing is for insects to expel as much water as possible before temperatures drop too far. To avoid dehydration, insects can retain water in their cells to stay alive, while expelling any other freezable fluid to prevent themselves from turning into a tiny popsicle.

While most insects have specific adaptions for the winter, some never leave the cold. Grylloblattids are a critically endangered group of insects. In North America, we have 10 species that live high in the mountains and on glaciers. These little guys are incredibly adapted to the cold and prefer temperatures around freezing. If held in the human hand only briefly they can overheat and die. They’re rarely seen since they’re nocturnal and stealthy, finding their food by hunting other insects.

While some insects adapt to meet the challenges of winter and continue with relatively normal activity, others find ways to escape the cold. Monarch butterflies and many other species make long migrations to fairer weather. Incredibly, with short life spans and long distances to travel, these migrations can take place over many generations, and scientists are still working to understand how this seemingly-genetic transfer of location information is possible.

Other species die off before the winter, leaving their eggs and larvae behind to mature and emerge in the spring. The praying mantis, for example, covers its eggs in a foam-like case to keep it warm, while most adults die before spring. Others, such as the ladybug, have longer lifespans and will spend a few winters as an adult. Many of these species enter a state of dormancy, much like the grizzly bear, and sleep away the winter. Ladybugs can be found in large groups that preserve some warmth. Up to a thousand can be huddled together all winter long!

Just like grizzly bears, insects evolve to seasonal change over long periods, and their responses to winter are finely tuned to predictable cycles. Climate change is starting to impact winter in the mountains, bringing milder average temperatures and faster-melting snowpack as a result. On a warm day in the middle of winter, temperatures might get high enough to signal spring before dropping again. The natural “antifreeze” substances insects produce don’t just switch on and off. They build and decrease naturally. When spring signals come too early, their bodies might prematurely start to decrease their production of freeze-prevention substances.

Honey bees have also faced challenges due to climate change. In some species, only queen bees emerge immediately after spring to start a new hive. With spring temperatures coming earlier, these queens are starting their hives too soon. A new queen may be born before summer is over, and will try to start her own hive in the fall. By wintertime that nest will die off, further decreasing a struggling species’ population.

To see how climate impacts on insects affect the whole ecosystem we can turn to the mountain pine beetle. These beetles have wreaked havoc on trees in forests across the Northern Rockies and Northwest. These are native species and part of the evolved forest, but milder winters have allowed them to produce massive outbreaks, with the spells of deep cold that kill the insects now occurring less regularly. This puts more trees at risk, with impacts across the ecosystem. In Yellowstone National Park, grizzly bears once relied on the rich seeds of whitebark pine as a primary source of protein. With beetle outbreaks killing countless pines in the area, however, bears have been forced to shift their diets, typically to a more meat-heavy one.

Grizzlies are a habitat generalist. This means they cover huge parts of the landscape and aren’t particular to certain areas. But forced dietary shifts like the loss of pine seeds means bears may have to move farther to meet their needs, and outside of national parks like Yellowstone, that may often mean crossing privately-owned lands. Vital Ground conserves these critical pathways and supports bear-aware communities so grizzlies—and every species that follows in their paw prints—have room to roam and adapt. We do it because we know that by protecting grizzly habitat we protect habitat for all animals—even the bugs.

Learn more about the grizzly’s role as an umbrella species…