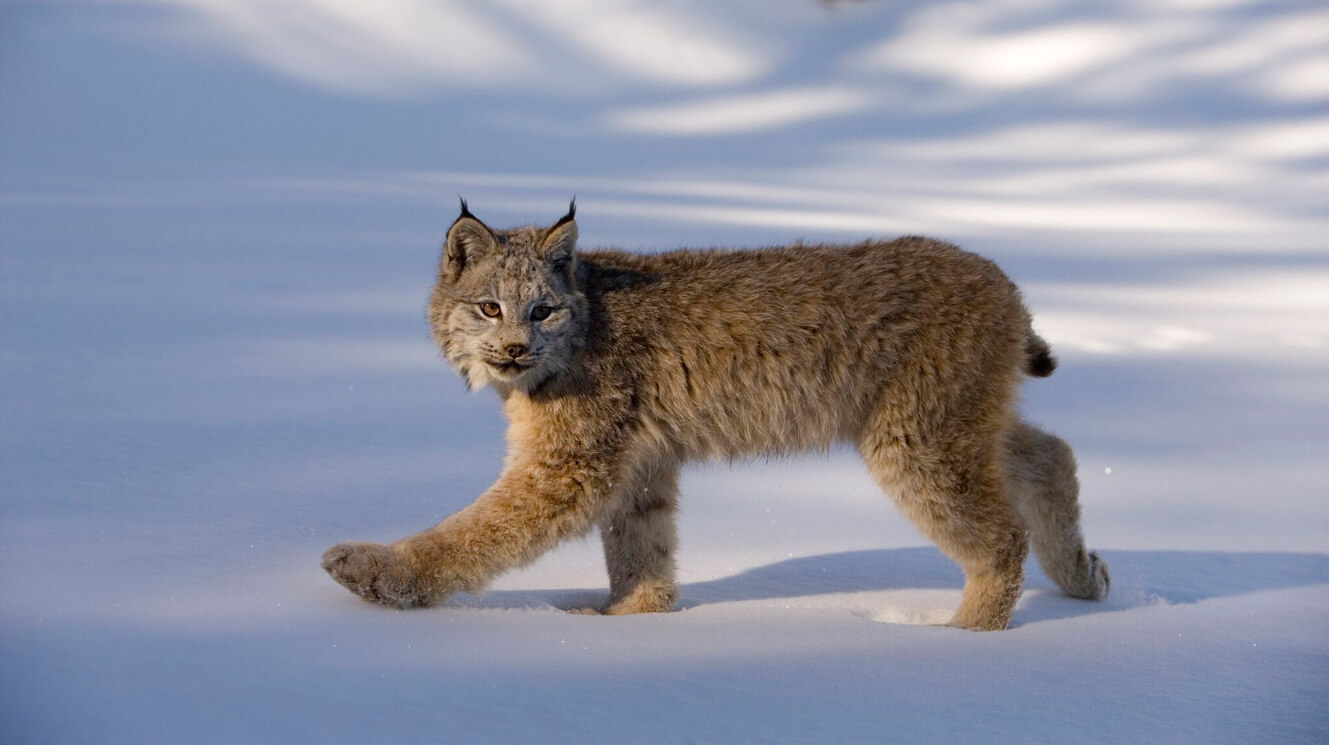 With long legs, and huge, snowshoe-like paws, Canada lynx have evolved to hunt in the deep snows of a mountain winter. But climate change is disrupting that advantage.

Canada lynx are among the rarest wildlife species to spot. Perhaps you’ve gotten lucky and seen their tracks, or even spotted one of these stealthy, elusive cats. They’re highly adapted to winter conditions, making them expert hunters in deep, persistent snow. As bears start to emerge from their dens, it’s time for our last post on winter wildlife. Long into spring, winter conditions remain present at higher elevations in the Northern Rockies. Let’s look at some creatures perfectly suited to those conditions—lynx and snowshoe hare—and the fascinating ecological interactions between them.

Lynx: Born for the Snow

In the Lower 48 lynx are found in northern mountainous pockets that suit their specific habitat needs. They look similar to their cousin, the bobcat, which is found in every state except Hawaii. The primary difference between these two species? The lynx’s unique adaptations to winter. With longer legs and giant paws, lynx are able to traverse snow with ease and hunt all winter long in cold climates, but they are out-matched by bobcats in areas with milder winters.

Unlike grizzly bears, Canada lynx require highly specific habitat. They seek slopes with thick vegetation cover to build their dens and shelter their kittens. They also hunt in these areas with horizontal cover—meaning lots of plants, rocks and fallen trees close to the ground—since that’s where their prey will hide. Additionally, these areas must retain the snowy winter conditions lynx require to gain a competitive advantage while hunting. These specific habitat needs are a large reason why Canada lynx are listed as a threatened species by the U.S. Fish and Wildlife Service.

Lynx rely on snowshoe hare as their main source of prey, with the single species comprising up to 96 percent of their diet. When hare populations are high, lynx can eat up to one hare per day. That’s a lot of rabbit!

Because of this relationship, the two critters have evolved together, with hare developing winter adaptions to avoid lynx, and lynx in turn developing winter adaptions to catch them. Snowshoe hare change their coat color to match the season—a fluffy white for camouflage in winter snow, and a mixed brown and grey to match the spring-through-autumn ground. Unlike other lagomorphs (the taxonomic order of hares and rabbits), snowshoe hare don’t dig tunnels, instead relying on speed and camouflage to escape predators.

Climate change has led to warmer winters across Canada lynx and snowshoe hare habitat. This often means less snow, which both species rely on, as well as faster and more frequent melting of snow. With less consistent snow cover, lynx lose their competitive winter advantage and face greater competition from coyotes and bobcats.

Recent research and observations also show that snowshoe hare change their coat color based on the photoperiod, or length of day, and not the presence of snow. Hares can now be spotted more frequently with a white coat before snow has come down in the fall, or when the snow has already melted in the spring, making them easy targets for predators. Any crash in the snowshoe hare population has devastating effects on the specialized lynx, and earlier snowmelt now makes this an unfortunate annual possibility.

How Can We Help?

What Canada lynx and snowshoe hare need now more than ever is connected habitat. In response to the challenges from the changing climate both species may explore new areas, seeking habitat at higher elevations, on colder sheltered slopes, or farther north. Open, wild corridors make that movement possible. By connecting and protecting the grizzly bear’s habitat strongholds, Vital Ground and our conservation partners increase climate resilience for lynx and snowshoe hare as well.

We’ve always been guided by the knowledge that where the grizzly walks, countless species can follow in its paw prints. Under the new reality of climate change, the grizzly’s role as an umbrella species for conservation has never been more important, and that means your support of grizzly conservation is more vital than ever, too. Moreover, by helping protect natural ecosystems, you don’t just give sensitive species and ecological interactions room to adapt; you also help mitigate planetary warming by reducing new, resource-draining development and protecting carbon-storing forests.

We hope you’ve enjoyed this peek into the lives of wildlife that stay more active while bears are asleep. We’re eager to welcome grizzlies back to the landscape, but it’s also important to remember that our ecosystems are incredible tapestries of life, with each species valuable to the natural community’s continued success and supported through protected habitat.

Learn more about the grizzly’s role as an umbrella species…