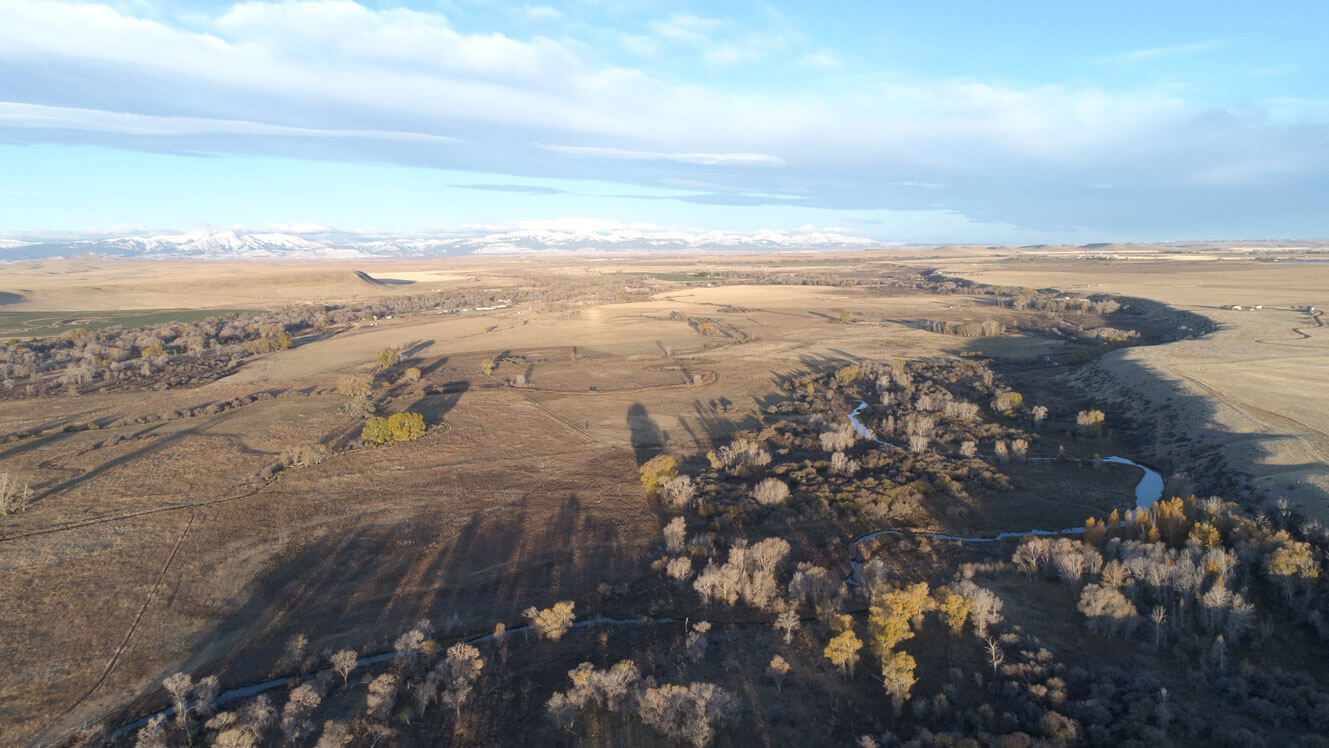 CHOTEAU, Mont. – When Mary Sexton had the chance to buy her grandfather’s ranch, she knew the decision was about far more than herself.

“It’s a small ranch that was my grandfather’s that I’ve been fortunate enough to get back into the family,” Sexton says of Glen Willow, a 650-acre spread just north of Choteau, Mont.

With a long gravel drive winding east from U.S. Highway 89, the ranch is diverse and picturesque. A cottonwood-lined stream cuts through a corner of the property and a high bench of land rises behind the barn and ranch house, extending east onto a sea of plains. Twenty miles to the west, the Rocky Mountain Front Range articulates a jagged horizon, home to Glacier National Park and the Bob Marshall Wilderness.

Now, the open space and natural resources of Glen Willow will be maintained in perpetuity. In collaboration with the U.S. Department of Agriculture Natural Resources Conservation Service (NRCS) and the Missoula-based Vital Ground Foundation, Sexton completed a conservation easement on Glen Willow earlier this week.

“It’s really a gem that my grandfather kept very healthy,” Sexton says. “I hope to continue that  through my generation and my daughter’s generation.”

Spend time on the land and it doesn’t take long to recognize the diverse values of Glen Willow. Spring Creek, a short tributary of the Teton River, offers habitat to wildlife ranging from deer and elk to waterfowl and the occasional grizzly bear. Elsewhere on the property, the ranch continues a rich agricultural history, producing grain and hay crops while grazing livestock.

“We graze cattle and run some horses and do some farming,” says Sexton, who has owned the land since 2014. The ranch was originally consolidated by her grandfather in the 1930s. He had moved to the area from Iowa and was a doctor in Choteau.  Over the years, he ran sheep, cattle and horses on the property in addition to raising turkeys as well as grain and hay crops.

Because of its combined agricultural and habitat values, Glen Willow marked a strong opportunity for partnership between Vital Ground, a land trust focused on protecting wildlife habitat, and the NRCS Agricultural Land Easement (ALE) program. The national ALE fund assists farmers and ranchers who wish to keep their land in agriculture. With Vital Ground holding the ranch’s easement, it will never be subdivided and converted to dispersed residential or commercial development.

A Model for Wildlife Practices

Glen Willow’s riparian corridor accounts for about 100 acres of stream and wetland habitat, providing range for a multitude of native species. But the easement may prove especially beneficial to grizzly bears. The ranch continues to see grizzly traffic, especially during spring green-up, but Sexton and her family avoid encounters by minimizing attractants like loose livestock feed or garbage and making noise while carrying bear spray on parts of the ranch where bears may be present.

With grizzlies continuing to reclaim historic habitat along central Montana’s plains and waterways, Vital Ground is committed to the safety of both people and wildlife in the area. In 2018, the organization supported Montana Fish, Wildlife & Parks in equipping operators and residents along the Rocky Mountain Front with electric fencing, airhorns and other tools to prevent bear-related conflicts on agricultural lands. At Glen Willow, the opportunity to protect key habitat while partnering with a diligent landowner drew Vital Ground to its first easement east of the Continental Divide.

“Vital Ground has a long history of protecting working forest lands, but Mary’s conservation easement provided an excellent initiation into the attention and patience it takes to maintain more diverse ag operations in grizzly bear country,” says Ryan Lutey, executive director of Vital Ground. “Over the past few years, we have been striving to complement habitat conservation with support of community-based programs to prevent conflicts between bears and people. This project provided a great model where both of those prongs come together on the land.”

With the easement now in place, Vital Ground will hold development rights for Glen Willow in perpetuity. Through both land protection and conflict prevention, the organization will continue pursuing projects in the area that safeguard habitat and maintain tolerance for wildlife on agricultural lands.

That dual commitment was key in bringing Vital Ground and Sexton together as conservation partners.

“Vital Ground understands that to have a vital grizzly bear population, we have to have private landowners that are also interested in maintaining the quality of their land,” Sexton explains. “I think to find a partner like Vital Ground, who understand that working lands are also good habitat—it’s very important to have that partnership.”

In addition to NRCS funding and generous contributions by Sexton and other individuals, the project was supported by the Cross Charitable Foundation, M.J. Murdock Charitable Trust, William P. Wharton Trust, and the Pleaides Foundation.

Beyond its iconic scenery and importance for wildlife, a conservation outcome at Glen Willow secures a multi-generational family legacy of care for the land.

“I think a conservation easement is the very best protection you can give a piece of property in the long run,” says Sexton. “Because we’re all temporary.”