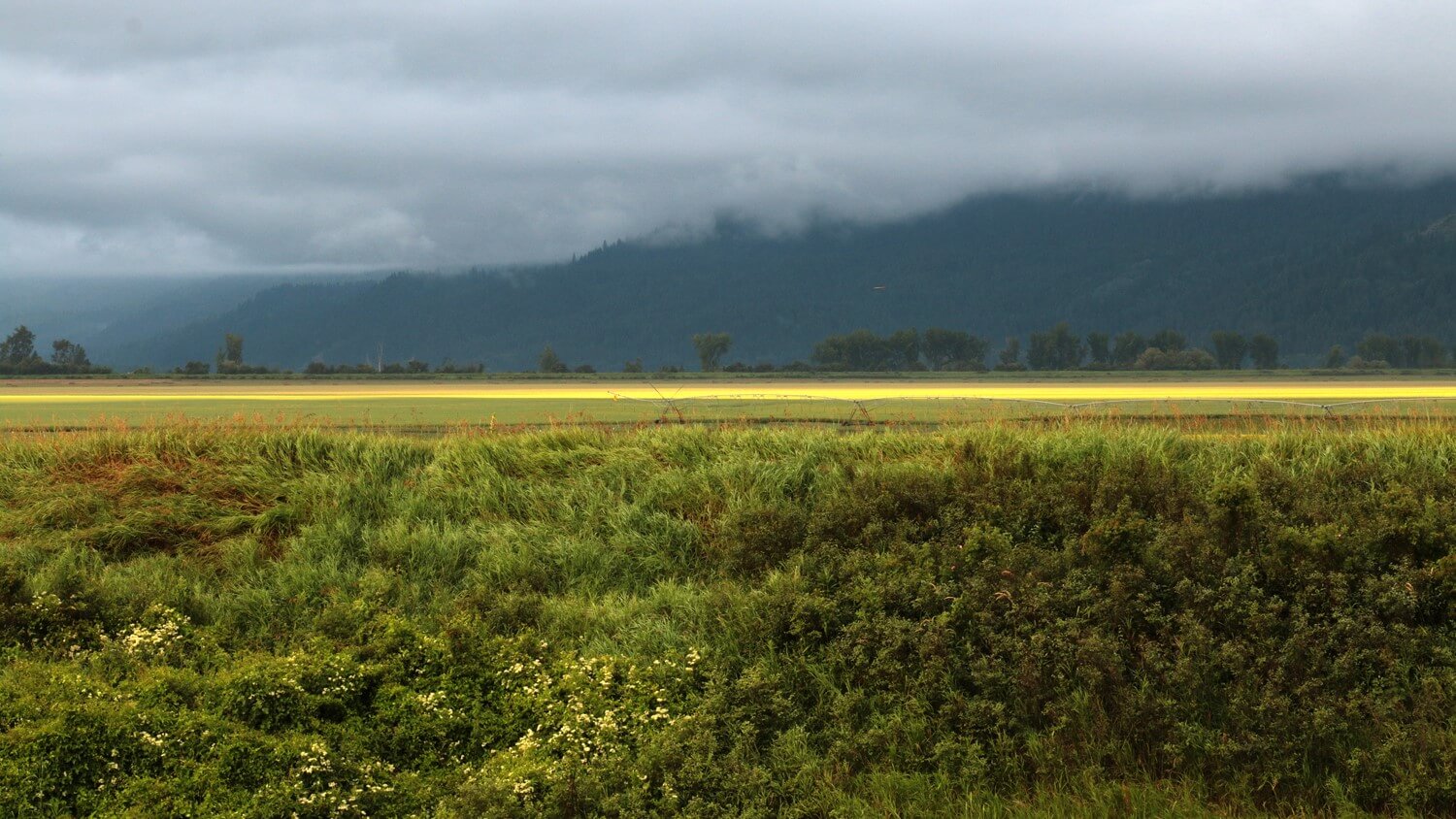 Photo: Kevin Rhoades
The Hubbard Farm in northern Idaho's Kootenai Valley provides fertile agricultural soils and vital habitat in a key wildlife corridor. Vital Ground is working to protect the land through a conservation easement supported by the U.S. Department of Agriculture and the new Pacific Northwest Resilient Landscapes Initiative.

At the top of Idaho’s Panhandle, the Kootenai River runs north toward Canada like someone intent on leaving the country. Before it crosses the border, however, it carves a wide and fertile valley that splits two rugged mountain ranges, the Selkirks and Purcells.

The valley is rural and agricultural, an important food provider for the Inland Northwest. It’s also an increasingly vital wildlife corridor. Biologists have documented grizzly bears, wolves, moose, elk herds and even the elusive wolverine crossing the valley bottom to move between the mountains.

Vital Ground is working to conserve 1,040 acres of farmland and wildlife habitat through a conservation easement on the Hubbard family’s farm in the valley. The acreage borders the Kootenai River to the west and other protected land to the east, helping solidify an open corridor between the Selkirks and Purcells.

“Our family has been farming this ground for generations,” says landowner and farmer Wes Hubbard. “This conservation easement ensures that this land will continue to be farmed and available for wildlife for many more generations to come.”

The 2018 Farm Bill allocates $450 million annually toward conservation easements while in 2019 the NRCS designated the Kootenai Valley as prime farmland and a conservation priority due to its exceptional soil quality. The Hubbard farm’s selection for the ALE program means NRCS will contribute 50 percent of the project’s cost while the Hubbards continue to own and manage their farm, having carefully planned the specifics of the easement with Vital Ground.

“The ALE program was intended to focus on places where you still have an active farming community and an economy that is dependent on having land available for farming into the future,” says Mitch Doherty, Vital Ground’s conservation manager. “Because of the high-quality agricultural soils, landowners in the Kootenai Valley are positioned exceptionally well in terms of accessing those dollars.”

Biologists and climate scientists project an increasing need for wildlife to move between ecosystems as planetary warming alters habitat features like snowpack and plant food availability. When habitat areas become less reliable, animals must relocate to meet their needs, highlighting the need for protected travel corridors between wild strongholds. At the same time, human communities also need adaptability—during a time of international economic uncertainty, family farms like the Hubbards’ form the backbone of local markets and food security.

This combination of ecological and community benefits made Vital Ground’s project an ideal fit for the new Pacific Northwest Resilient Landscapes Initiative, a partnership of the Land Trust Alliance, Oregon Community Foundation, Seattle Foundation and Idaho Community Foundation. The Kootenai Valley Linkage Project is one of the initiative’s first 15 projects from around the region, with fundraising to support the efforts ongoing.

To further benefit wildlife, Vital Ground hopes to partner with the Hubbard family, NRCS, U.S. Fish and Wildlife Service and the Kootenai Tribe of Idaho to restore streambank habitat along the Kootenai for the endangered white sturgeon and other fish. Additional habitat restoration on the property could include adding pockets of vegetation cover to the agricultural landscape.

Where the Grizzly Can Walk

The project will maximize the chances of wildlife safely crossing the valley bottom. That connectivity is especially vital for grizzly bears, with biologists estimating just 50-60 grizzlies enduring in the Selkirks, 25-30 in the American portion of the Purcells, and a similar number in the neighboring Cabinet Mountains. These three fragmented groups form the species’ smallest and most vulnerable populations in the Lower 48. With increased movement between them, the populations can avoid inbreeding and adjust to a changing environment.

The Hubbard farm’s importance as part of a crucial wildlife corridor for grizzlies and many more species made it a priority for Vital Ground’s One Landscape Initiative. In critical connectivity areas like the Kootenai Valley, the organization is pursuing strategic conservation on privately-owned lands that connect the wild strongholds of the Northern Rockies, from the Greater Yellowstone area north into Canada.

“Vital Ground recognizes that farms and ranches across the region provide the habitat wildlife need,” says Doherty. “It’s a win-win-win situation for landowners, the agricultural community and wildlife when we can put Farm Bill dollars to work on the ground in places like the Kootenai Valley.”