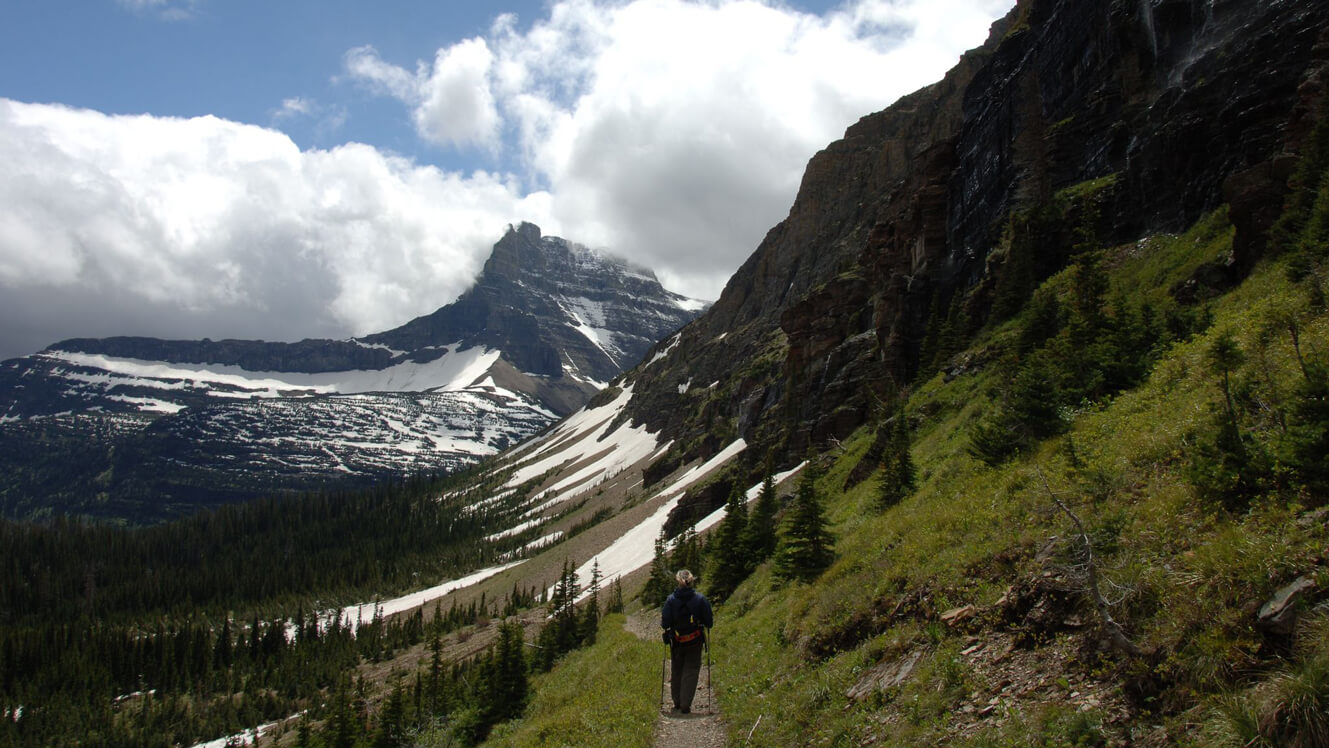 Photo: Lance Schelvan
Whether hiking in Glacier National Park (pictured) or fishing along a river, it's vital to follow bear safety guidelines while recreating in grizzly country.

We’re well into spring in the Northern Rockies, and with trails emerging as the snow melts many of us are getting back outdoors in grizzly country. Knowing bear safety measures can keep you and wildlife safe. Here are the three most important things to do while recreating around bears.

An encounter with a bear is very unlikely to turn aggressive. Most bears are just as afraid of us as we are of them, and will avoid confrontation. Did you know that most bears’ greatest fear is a Nalgene bottle covered in stickers and the smell of a backpacker after three nights in the wilderness? But in all seriousness, most bears are skilled at avoiding people. They very rarely attack a human unless they feel seriously threatened or fear for their cubs.

You can avoid surprising a bear by traveling in groups, staying on trails and roads, and making noise by talking, singing, or carrying bells. Bears don’t like to be startled, so making noise is especially important in areas with low visibility or with background sounds, such as a stream. While hiking, look out for signs of bears like tracks, scat, and markings on trees. Be extra alert where you see these signs, and don’t camp in those areas.

If you see a bear, lucky you! Seeing a bear in the wild is a rare and special moment, and one of the many reasons we value protecting them. That being said, it’s important to act wisely to protect yourself and the bear.

Always stay calm and stay in your group. Speak softly, avoid sudden movements, and avoid eye contact. If the bear notices you, slowly back away and never run. Running can lead a bear to view you as prey and not as a scary human. If you stay calm and retreat without turning your back, you and the bear should be on your merry way, but if not, it’s important to know how to react when charged by a bear.

2. Carry Bear Spray and Know How to Use It

Bear spray is the best line of defense for any outdoorsperson. Research has shown it to “reduce the number of grizzly bears killed in self-defense, reduce human injuries caused by bears, and help promote the recovery and survival of the grizzly bear.” In fact, bear spray is considered more effective than a bullet since firing a gun often escalates the severity of bear attacks while bear spray diffuses them by disorienting the bear without injuring it.

Bear spray should only be used in an aggressive encounter. Until a bear charges there’s no reason to deploy bear spray. However, if a bear does charge, bear spray will quickly become your best friend. In that situation here’s how to make the best use of your bear spray:

Okay, I know what you’re thinking: “I have an angry bear with three-inch teeth and paws the size of my face charging straight for me and I need to adjust for wind?!” Facing a charge from a bear is an incredibly adrenaline-filled situation, and your fight or flight instinct will control your response. The good news is that we can train ourselves to respond most effectively by learning and practicing.

Practicing with your bear spray will help you prepare for an aggressive encounter. Practice accessing your canister and removing the safety until it’s in your muscle memory. This will give you one less thing to think about in the event of a charge.

Try out your spray by giving one short blast to get a feel for the discharge and to see how far it travels. Always be careful not to get it near anyone. Bear spray can deter a charging grizzly bear, but we can’t guarantee that it will prevent an attack from your hiking buddy if you get it in their eyes!

Make sure that your bear spray is always with you in bear country. If you put down your pack make sure to take your spray with you. Keep it with you at a campsite, especially while cooking, and put it in a safe spot in your tent at night.

In the extremely unlikely situation that a bear does attack you, the time of day and species will be crucial to your response. Identifying a bear as soon as you encounter it is crucial—if adjusting for the wind as a bear charges at you is a tall order, trying to spot its shoulder hump or dished face profile certainly is.

Despite the name black bear, black bears can come in many different colors from dark black to the white spirit bears of British Columbia, so fur is not a reliable way to tell the two species apart. This quiz can help you test out your identification skills!

When a black bear attacks, always fight back. Use bear spray first, and other means if necessary. Black bears are a less dominant species on the landscape than grizzlies, and showing one that you’re a serious threat should cause it to leave you alone. As for grizzly attacks, much depends on the individual bear’s personality and the circumstances of the incident. Playing dead rarely proves effective in stopping an attack. As an alternative, you may be able to fight back or scramble up a tree, although neither is a failsafe option. What isn’t up for debate is the effectiveness of bear spray in preventing attacks when properly used, so it’s a far better use of time to practice your spray technique than worry what you might do if you can’t reach it in time.

When we go outdoors into the homes of bears it’s crucial to know how to keep ourselves and bears safe. Coming upon a grizzly or black bear on any given hike is pretty unlikely, but if you get lucky you might get to see one of these majestic creatures. Knowing you’re prepared can allow you to explore nature at ease, with the tools to stay safe.

I encountered my first wild bear while thru-hiking the Enchantments in Washington State. My hiking partner and I came upon a black bear about 30 feet up a side trail from where we stood. We stayed calm, knowing we had bear spray if we needed it, spoke softly, and backed away while the bear carried on. It’s among my favorite experiences outdoors, and I hope these tips help you get the chance to encounter wildlife safely as well.

In addition to protecting crucial habitat for bears and other wildlife, Vital Ground works to prevent bear conflicts from Wyoming to Washington by partnering with groups that keep people and wildlife safe. From bear spray education to electric fencing for landowners in grizzly country, these efforts go a long way to helping bears and people share the landscape.

As we move into the summer, check back on the blog for news about this year’s conservation partners, tips on keeping your home bear-proof, and learning how to spot signs of a grizzly or black bear in the woods. And if you’re heading out into the backcountry, stay safe and happy trails!