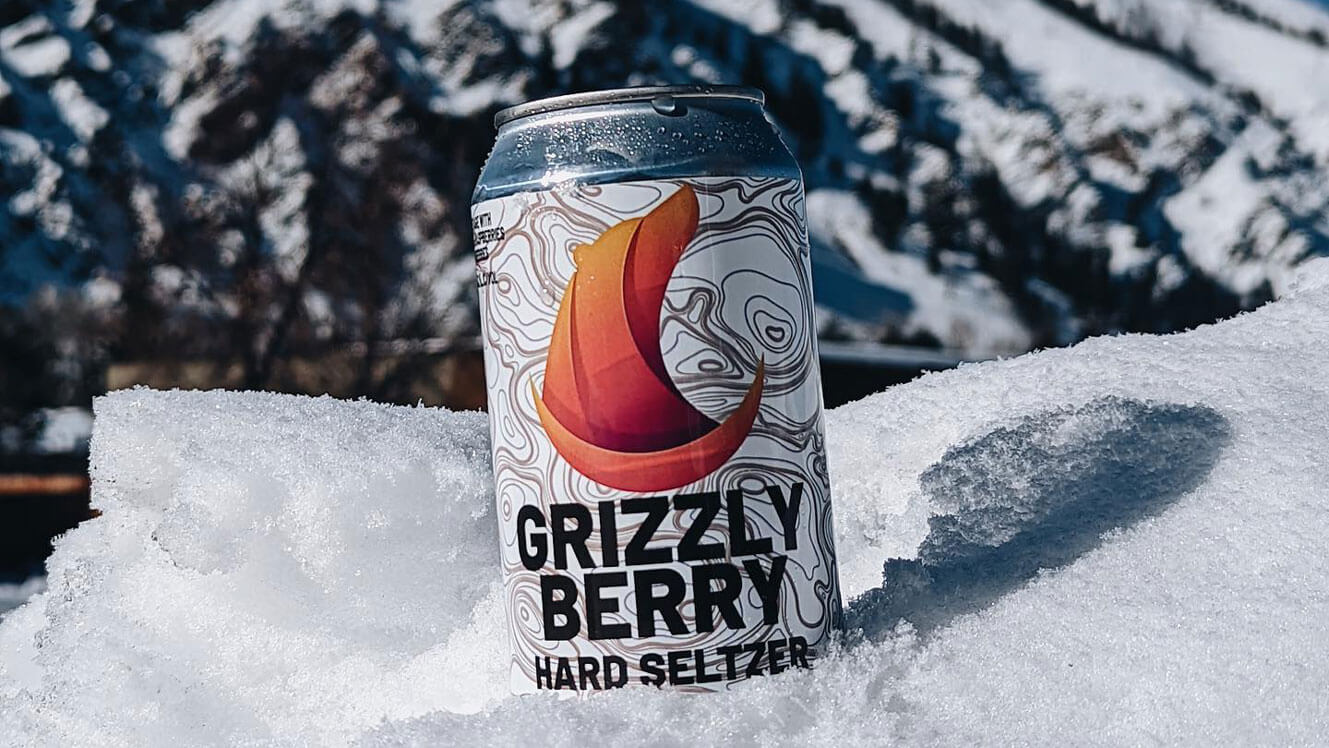 Photo: courtesy of Sawtooth Brewery
The new Grizzly Berry Hard Seltzer is a collaboration between Sawtooth Brewery and Vital Ground, with five percent of all proceeds benefitting habitat conservation.

Being a grizzly bear is hot work sometimes. Over the long days of summer, as temperatures peak and bears forage far and wide to pack on fat before winter, grizzlies often have to take a break to beat the heat.

For humans who support grizzly conservation and also need to cool off sometimes, there’s a great new way to do both. Vital Ground is pleased to announce the launch of Grizzly Berry Hard Seltzer, a new conservation collaboration with Sawtooth Brewery.

Brewed by Sawtooth’s Creekside Hard Seltzer, the refreshing beverage is not your average hard seltzer, made with raspberry, blackberry and strawberry fruit puree with no added sugar or flavors. It is now available for distribution in cans across grizzly country and immediate purchase online or at Sawtooth’s headquarters in Hailey, Idaho. Five percent of all proceeds will support Vital Ground’s efforts to connect and conserve habitat and prevent conflicts for grizzly bears and all biodiversity in the Northern Rockies.

“Sawtooth Brewery and Creekside Seltzer were built on donating and helping any cause that’s good for our community,” said John Anderson, Operations Manager at Sawtooth Brewery. “As we launch into larger new markets, we only want to continue the trend of supporting causes that are beneficial for our community and the habitats we live and play in. With this partnership with Vital Ground, we are supporting them to protect and restore North America’s grizzly bear populations for future generations.”

Sawtooth and Vital Ground staff celebrated the joint effort in person last week with a release party and tap takeover at the Dram Shop in Missoula, Mont. Grizzly fans who hurry may find a limited number of cans of the new seltzer still available for purchase at the Dram Shop’s downtown Missoula location.

As winter turns to spring and the weather warms, Anderson encourages conservation supporters to request Grizzly Berry Hard Seltzer at their local watering holes across Montana and Idaho, with Sawtooth and Creekside ready to ramp up production and distribute the refreshing cans and their conservation benefits across the region.

While Vital Ground is no stranger to the beverage world, having enjoyed long and productive partnerships with Montana Coffee Traders and Ten Spoon Vineyard and Winery, teaming with Sawtooth and Creekside represents the land trust’s first dip in the waters of craft beer and seltzer. The new collaborators join a growing network of stalwart business partners helping advance the cause of grizzly and biodiversity conservation while gaining exposure to Vital Ground’s large and enthusiastic base of supporters and followers around the country and world.

“Business partners like Sawtooth Brewery and Creekside Seltzer are key in our efforts to conserve spaces for grizzly bears, moose, bull trout, Canada lynx and many other sensitive species,” says Kevin Rhoades, Vital Ground’s director of communications, marketing and membership. “Partners benefit by identifying with the iconic grizzly bear and the goodwill that flows from protecting and connecting wildlife habitat for animals and people alike.”

Whether you’re floating a river or beating the heat on a backyard patio, now there’s a tasty new way to keep the goodwill flowing toward habitat conservation this summer. Just be sure not to leave any cans behind for the bears!