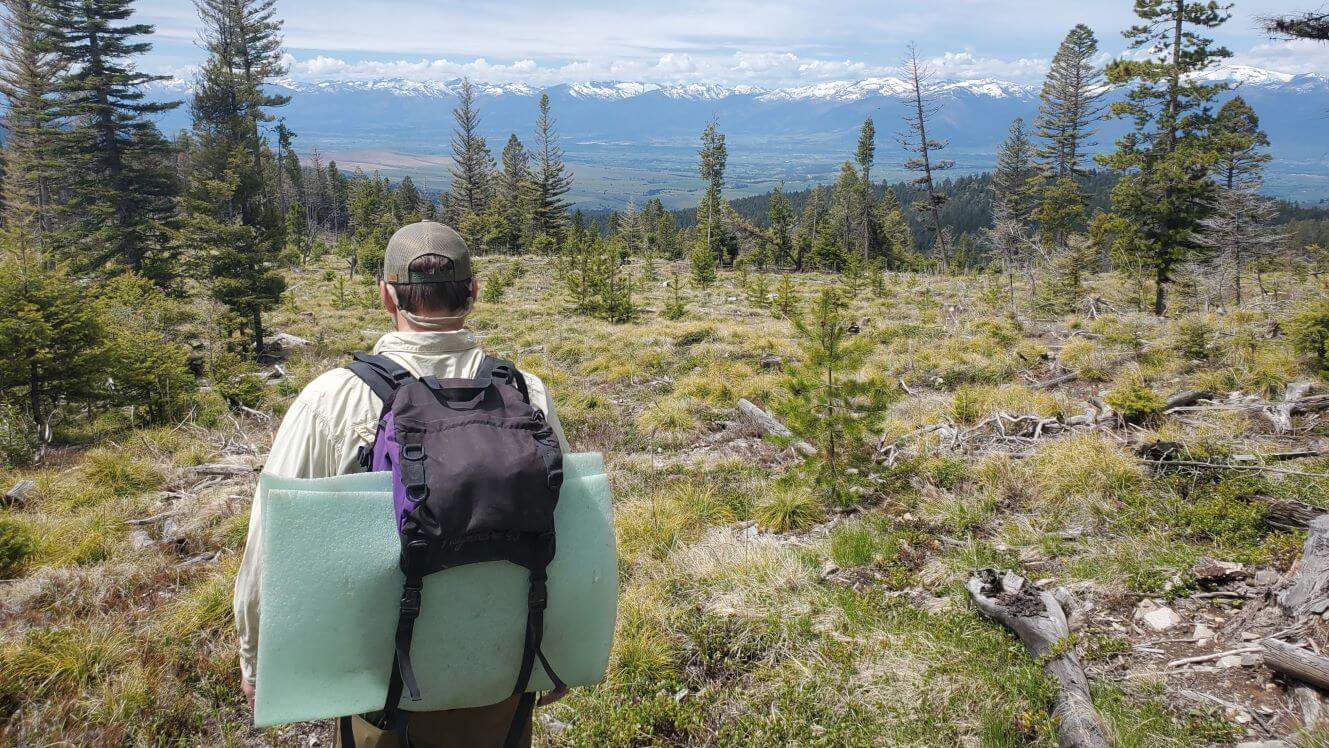 Russell Talmo, a program associate for Defenders of Wildlife, hikes toward a monitoring site in the Sapphire Mountains as part of the Southwest Montana Grizzly Bear DNA Project, a collaborative research effort supported by Vital Ground. Across the Bitterroot Valley from the Sapphires, the Bitterroot Mountains extend into Idaho.

The one-track roads leading from Stevensville, Mont., into the Sapphire Mountains are lined with wildflowers like beargrass and lupines by early July. As the truck climbed continuously up the hillside, the view of the Bitterroot Valley got better and better, as it was a clear, sunny day with temperatures in the 80s.

Earlier this month, I was lucky enough to tag along into the field with Russell Talmo, a program associate for Defenders of Wildlife, and Gypsy, Talmo’s seven-year-old German shepherd. Talmo goes into the Sapphire Mountains monthly to check on six designated field sites. The goal? Talmo is looking for grizzlies.

More specifically, he’s looking for evidence of grizzly bears in this mountain range as part of the Southwest Montana Grizzly Bear DNA Project. Defenders is a partner on this initiative spearheaded by the U.S. Fish & Wildlife Service. Other partners include Montana Fish, Wildlife & Parks, the U.S. Forest Service and Vital Ground.

“Over the past decade, there have been numerous grizzly bears documented in the Bitterroot Valley,” Talmo said. “This study is designed to determine where bears are coming from and how they’re traveling into the Bitterroot and accessing the Bitterroot Ecosystem.”

Why look for bears entering the Bitterroot? Besides a basic thirst for knowledge, the study could shed light on the future of grizzly conservation. Boasting large roadless areas and a vast expanse of historic grizzly habitat, the return of a resident grizzly bear population to the Selway-Bitterroot Ecosystem could eventually provide a genetic link between the isolated Greater Yellowstone population and those farther north. For that reason, any evidence of grizzly traffic into the Bitterroot is hopeful news for conservationists — and any insights into how they’re getting there could help identify key corridors for protection. The project got off to a promising start last summer, with the Fish & Wildlife Service reporting evidence of grizzlies high up the East Fork of the Bitterroot River, near the southern end of the Bitterroot Valley.

How to Look for Grizzlies (Without Bothering Them)

We reached the first site around 11 a.m., before the sun was truly hot in the sky. We parked on top of a ridge and climbed down the hillside just a little bit — Talmo told me that a high vantage point makes it easier for the wind to pick up the smells of the site and carry them to the bears, drawing them in.

Each monitoring station that we visited employed the same mechanisms for luring and documenting bears. These mechanisms involve a simple set-up of double-barbed wire looped at shin-height around four trees, creating a diamond shape called a “hair-snare corral.” A fifth tree outside of the diamond was mounted with a motion-sensor camera. Within the diamond was a pile of sticks and debris. The pile is a critical piece of the puzzle — this is what lures the bear in. To attract bears to the site, you pour half a Nalgene bottle’s worth of scent lure onto the pile, which holds the smell until the next time a technician can visit the site.

The scent lure is a mix of animal blood and other goodies — to me it smelled absolutely foul, but to a bear it would be attractive enough to entice them to come check out the scene. The important thing about scent lure is that it provides no food reward once bears arrive at the site, so it isn’t training them to linger in the area.

“So they come and check it out, hopefully leave hair behind, hopefully get their photo taken, and go about their day,” Talmo said.

Once they get there, the camera and the barbed wire document their presence. These are both effective yet non-invasive monitoring techniques. When anything crosses into the diamond, the camera starts snapping. The first thing we did at every site was to pull the camera off the tree, and check the footage from the past month. At the first site we visited, there were no bears on camera, but a lot of deer and elk activity. One of them even got pretty nosy with the camera, redirecting the angle of the shot for the last few days.

At the second site, there were lots of bears! Unfortunately, Talmo, who is an expert at identifying the difference between a grizzly and a black bear, didn’t think the camera caught evidence of any grizzly bears. Still, the scent lure definitely worked — one black bear even belly-flopped into the stick pile to roll around in the smelly stuff.

The second thing Talmo did at each site was to walk around the diamond and check each barb for animal fur. The barbs, he told me, do a good job catching the hair and holding onto it until it can be collected — even when it rains, it doesn’t fall off. Every sample is collected and cataloged, but only silver-tipped hair that could belong to a grizzly gets sent to the lab for genetic analysis.

As we moved through all six sites, we didn’t see anything that Talmo definitively thought was a sign of a grizzly. We did, however, see evidence of a lot of other critters, a reminder that grizzly country is good habitat for countless species. The camera caught pictures of ungulates like deer and moose, plenty of black bears, and one male wolverine that Talmo thought he recognized from a past study — dubbed “Powder Paws” by the field technicians for his distinctly white legs. At site 4, the camera got a great photo of a turkey vulture diving in to analyze our pile.

The last thing we did at every site was to pour out the scent lure. After watching Talmo do it a few times, I tried it twice. After you pour the pungent stuff, you don’t want to stick around too long. We packed up our bags and went back to the truck, hoping that between now and next month, the scent lure would draw some grizzlies through the sites, providing new evidence of the species gradually re-connecting its historic range in the Northern Rockies.

Talmo, Gypsy and I made it down from the mountains by 7 p.m., which was good because we were in the truck just in time to avoid a Montana summer thunderstorm, which was accompanied in Stevensville by giant hail pellets. It was an exciting end to a very fun day.

Work like this is made easier by community members who are invested in the health of grizzly bears in western Montana and beyond. By supporting Vital Ground, you can help inform grizzly management for years to come. We thank you!