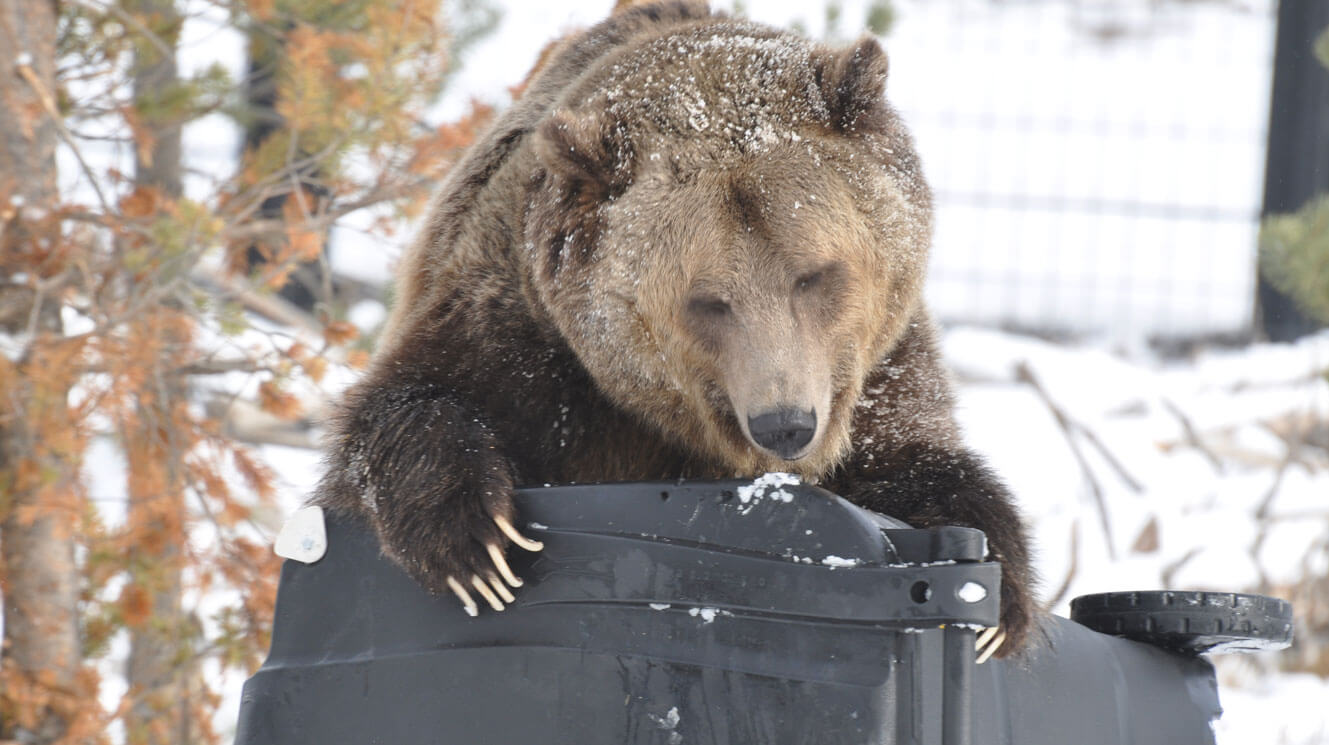 Photo: Patti Sowka
Loaning or subsidizing bear-proof garbage containers for landowners was one of several strategies that likely helped reduce human-caused grizzly mortality in two areas within the northwestern U.S. and southwestern Canada, according to a new study.

Studying grizzly bears demands patience. For one, the bears, like humans, are slow reproducers—a female’s typical gestation period lasts 6-8 months, her average litter size is two, and she will usually raise those cubs for two years before mating again. Add to that male bears’ penchant for solitary living and a large home range and you can start to see why it takes a long time for biologists to gather meaningful data on the species.

That makes a recently-published study analyzing bear-human conflict prevention especially significant. Led by Canadian grizzly biologist and Vital Ground advisor Michael Proctor, the project collected more than a decade’s worth of data from parts of the northwestern United States and southwestern Canada.

Their findings? In areas with active programs to prevent bear-related incidents—programs like subsidized electric fencing and bear-proof sanitation—the number of human-caused grizzly deaths decreased, while mortality rose where no active mitigation was present. Conflict reduction also linked to bears moving more freely on the landscape, with increased travel and genetic exchange occurring between subpopulations after mitigation programs were in place.

In other words, conflict prevention works.

In both places, rates of human-caused bear mortality had been rising before the programs began. In both places, they have decreased since. That’s despite both grizzly populations experiencing an increase in overall numbers during the study period. The drop in bear deaths was especially significant in the Cabinet-Yaak, where human-caused mortalities dropped roughly by half from 2009-2018.

Critically, the authors compared these trends to Canada’s nearby South Rocky grizzly population, where education and outreach was not accompanied by active mitigation efforts like fencing and sanitation. In this area, human-caused grizzly mortality has continued to increase significantly over the past decade.

Beyond their impact on bear deaths, the study also analyzed how conflict reduction related to grizzly movement across the region. Using data from radio collars and genetic sampling, researchers tracked grizzly travel across three different “fracture zones” where highways and other development have historically separated subpopulations: the Kootenai Valley, which splits the Selkirk and Purcell mountains around the Idaho-B.C. border; B.C. Highway 3, which divides the South Purcell and Yaak areas; and U.S. Highway 2, which separates the Cabinet and Yaak grizzlies of Montana.

In all three cases, more grizzlies traveled across the fracture zone from 2006-2017 than in 20 years of prior data. Genetic samples also revealed an all-important finding: while not yet present in the Highway 3 or Highway 2 areas, improved gene flow has accompanied conflict-prevention programs around the Selkirk-Purcell divide. DNA analysis since 2006 revealed 11 cases of a male bear successfully breeding after traveling across the fracture zone, while only one instance was documented in the 20 years prior.

While the authors acknowledge it is “difficult to conclusively prove” that conflict-prevention programs led to these landscape connections, there’s no denying that fewer dead bears means more potential for gene flow. That’s significant, as breeding events between ecosystems are critical to the grizzly’s long-term stability throughout the region, saving subpopulations from the downward spiral of inbreeding.

At Vital Ground, preventing bear-human conflicts has become a critical component of our mission, joining habitat protection as parallel prongs in our work for durable grizzly recovery. Thanks to a generous commitment by The ALSAM Foundation, we expanded our Conservation Partners Grant Program significantly in 2018, providing a dozen grants to conflict-prevention initiatives like the ones analyzed by the Proctor team.

These projects range from apple pickups near Missoula to dead livestock removal west of Glacier National Park to bear-proof sanitation for vacation rentals outside Yellowstone. Now, thanks to the Proctor team’s research, there’s data showing the strong connection between this vital work and measurable declines in bear mortality, as well as an uptick in grizzly movement between ecosystems.

That’s valuable scientific grounding for the crucial effort ahead. South of the new paper’s study area, grizzlies are ranging into areas that haven’t seen them in a century. From the valleys linking Yellowstone and central Idaho to the plains of central Montana, these roaming bears are crossing paths with people and livestock—on agricultural lands, on the edges of towns, even high in the backcountry.

But as the new research shows, a larger grizzly presence on the land doesn’t have to mean a spike in conflicts and untimely death for bears. If we invest in preventing conflicts across grizzly country, we will pave the way for a connected landscape where bears and people can better share space.