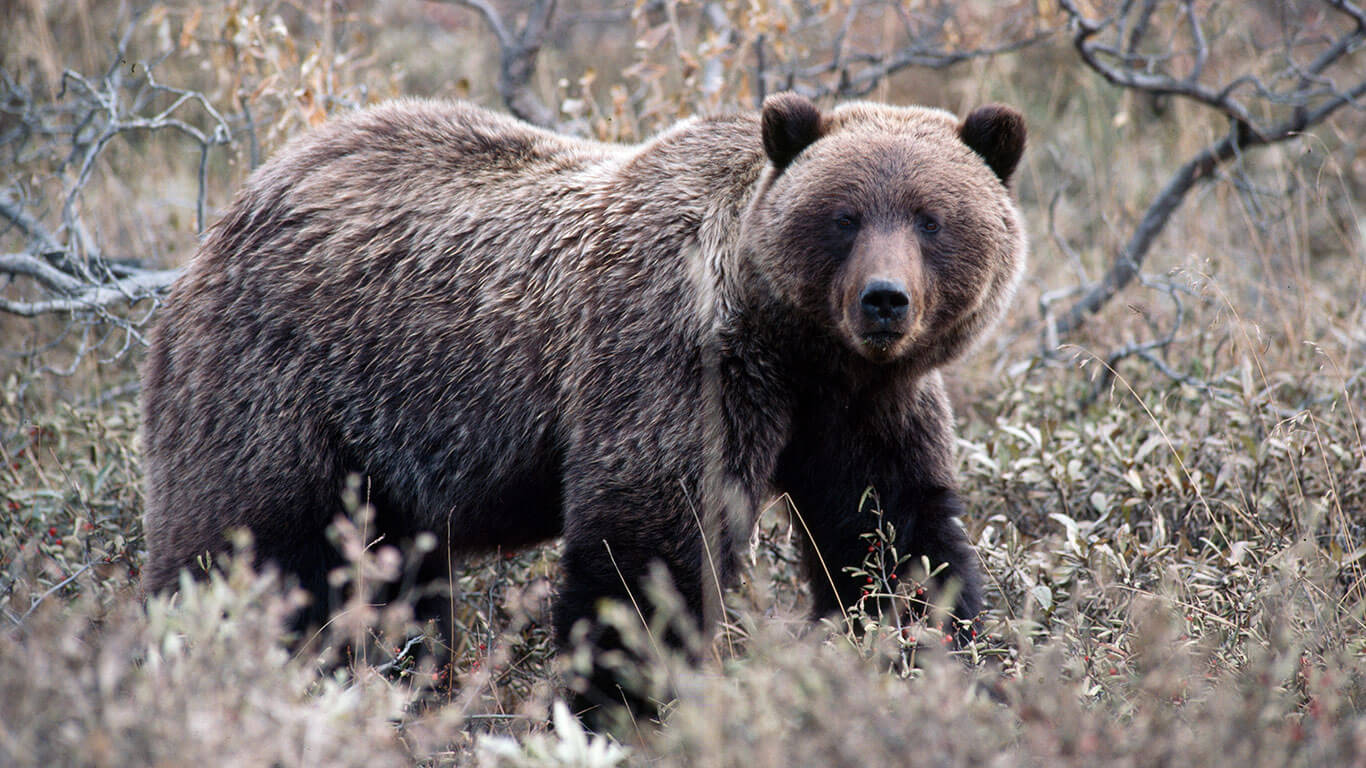 Photo: Thomas D. Mangelsen
During 2018, the future of grizzly bear management hinged on the legal battle over Yellowstone grizzlies' removal from protection under the federal Endangered Species Act.

During the fall of 2018, grizzly bears in the Greater Yellowstone area were busy fattening up before winter, hoping to pass the annual fitness test of hibernation, when bears will lose up to one-third of their body weight. As grizzlies dug for roots and grubs or sparred with wolves over deer, however, the terms of the species’ relationship with human beings became the center of public attention.

In 2017, the U.S. Fish and Wildlife Service had removed Yellowstone grizzlies from the federal list of threatened species, turning management authority over to the state wildlife agencies of Wyoming, Montana and Idaho. But a coalition of nonprofits and Native tribes challenged the decision in court, leading to a public hearing in a packed Missoula courtroom on August 30, 2018, just days before grizzly hunting seasons were set to begin in parts of Wyoming and Idaho near Yellowstone National Park.

After twice delaying his ruling and the hunts that hinged on it, federal judge Dana Christensen made his decision on September 24: Citing the importance of Yellowstone grizzlies to the species’ larger national recovery, Christensen returned the bears to the federal list of threatened species—one tier of protection down from “endangered”—blocking all hunting and mandating continued habitat protection as outlined by the Endangered Species Act.

When grizzlies were added to the endangered species list in 1975, fewer than 700 lived south of Canada. Scientists estimate the species once numbered around 50,000 bears in the Lower 48, but a century of human encroachment into grizzly habitat—and general persecution of all predators—had pushed the Great Bear to the brink.

Recovery began with that first federal listing, and in 1982 a management plan detailed the work ahead, naming six recovery zones and population targets for each. Thirty-five years later, Greater Yellowstone had met its recovery goal of roughly 700 bears, prompting the subpopulation’s delisting in 2017. 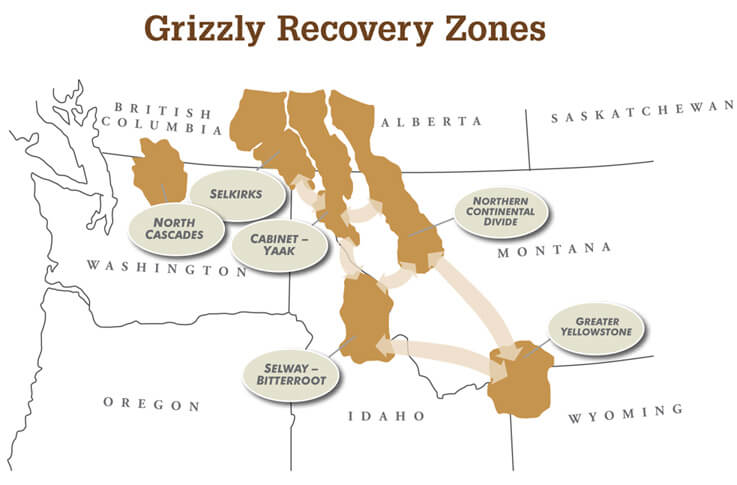 To the north, bears in Montana’s Northern Continental Divide Ecosystem (NCDE) now number over 1,000 and delisting remains a possibility as soon as 2019. The recovery of these groups within the ecosystems anchored by Glacier and Yellowstone national parks bears witness to both the grizzly’s natural resilience and the remarkable collaborative work of government agencies and other conservation-minded groups and individuals.

But the situation is different in the other four recovery zones. Recent DNA analysis reports fewer than 50 grizzlies persisting in the Cabinet-Yaak Ecosystem of northwestern Montana while the Selkirk Mountains of northern Idaho and northeastern Washington host an estimated 30 bears south of the border. Idaho’s Bitterroot Ecosystem and Washington’s North Cascades both feature vast cores of protected bear habitat, yet neither recovery zone sees more than rare vagrant grizzlies within its boundaries.

If grizzly bears are to develop stable populations in all six recovery zones, a combination of habitat protection and conflict prevention must allow bears from Greater Yellowstone and the NCDE to naturally range across the region. Connecting habitat will also gain importance as climate change alters the grizzly’s dietary landscape, forcing bears to travel farther as they adapt to shifting seasons and food availability.

When it comes to delisting, Vital Ground does not hold an organizational position “for” or “against” specific federal proposals. As a land trust, we hold fast to our mission of protecting habitat and preventing conflicts, work that will endure regardless of the grizzly’s federal protection status.

While we view grizzly recovery in Greater Yellowstone and the NCDE as a hard-earned conservation success, much work remains to achieve Vital Ground’s larger vision of a linked landscape from Yellowstone into Canada across which bears and other wide-ranging species—from wolverine to mule deer to bull trout—have room to roam and adapt. The grizzly’s long-term recovery in the Lower 48 will not be determined by a single listing decision but rather by sustained regionwide collaboration between federal and state agencies, Native tribes, conservation groups and the communities of grizzly country.

At Vital Ground, we’re all about teamwork. In 2017, our roundtables with wildlife experts showed us the most urgent places for habitat protection and conflict prevention. Our conservation work in 2018—from stopping subdivision in the Kootenai Valley to a dozen new conflict-prevention partnerships—are the results of sharpened strategy put into action.

Just as the grizzly’s yearly pattern of foraging and hibernating continues amid the delisting debate, our own work is far from finished.

Learn How You Can Help Grizzlies Today!